There is nothing more fun than taking part in your very own choose your adventure. Especially when set against the incredibly awe-inspiring and often logically contradictory setting of the Coachella Valley, California. Now toss in some thought-provoking contemporary art and you get Desert X. The biannual art festival is back for its second year after kicking off in 2017 and gaining global renown and Instagram fame for having massive pieces of art by renowned artists. You will likely remember seeing images of Doug Aitken’s Mirage and Phillip K. Smith III’s The Circle of Land and Sky on all your favourite social media platforms.

This year the festival boasts more than eighteen artists showcasing pieces spread across over 55 miles of (relatively) visitor-friendly terrain. Because of its setting, you will find yourself spending as much time admiring the stunning beauty out your car window as you will the art. With the snow-capped mountains in the near distance, the massive spinning wind turbines, or the lush green lawns of private residences, the environment ends up playing a chief role in the narrative of the art.

Artistic director Neville Wakefield and this year’s curators Amanda Hunt and Matthew Schum have organized the exhibition with a focus on the regions indigenous people and history, California’s shrinking Salton Sea, the U.S.–Mexico border (three pieces of which actually cross the US-Mexico border), and more. All pieces work to tap into a larger conversation. Of all the 18 pieces here are the ones we think you MUST see! 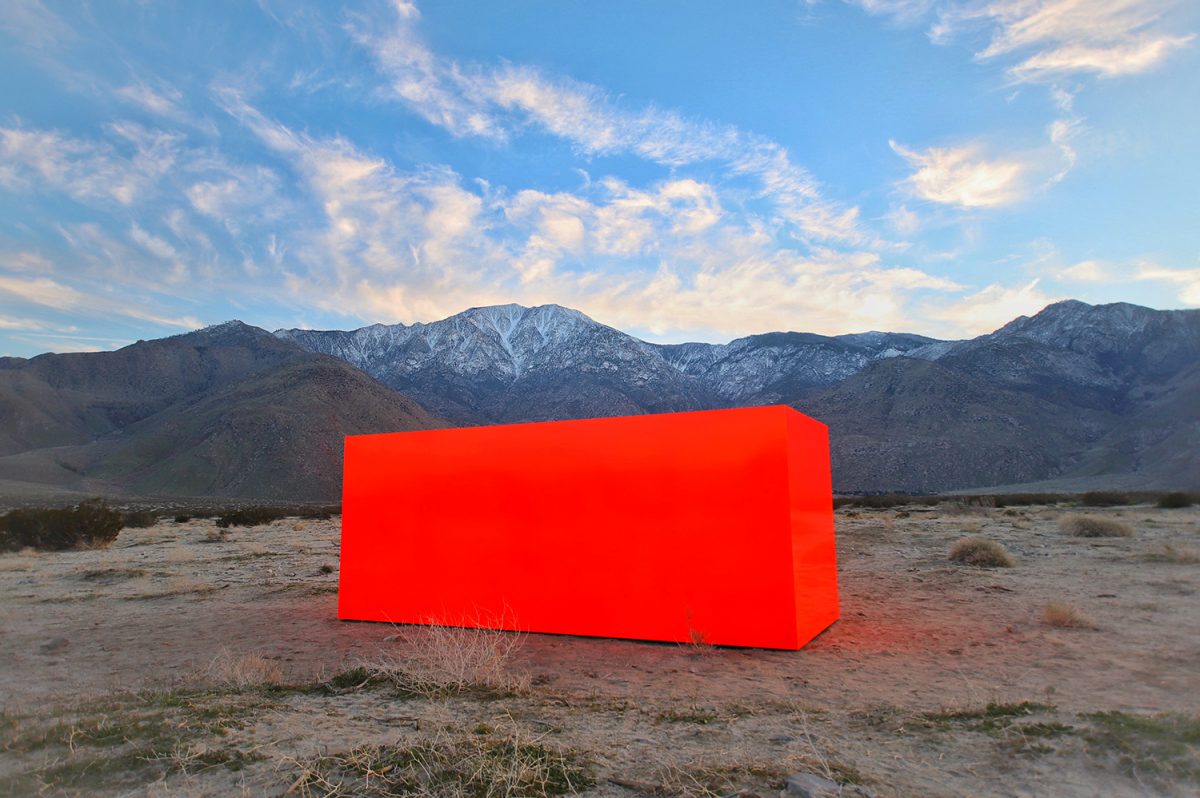 A bright, geometric sculpture set against the snow-capped mountains of Snow Creek, SPECTRE creates a jarring optical illusion in the desert. The fluorescent orange which traditionally used for safety, as a warning plays a literally optical illusion with your eyes as you try to focus on it. SPECTRE is a ghostly object, hiding in plain sight. 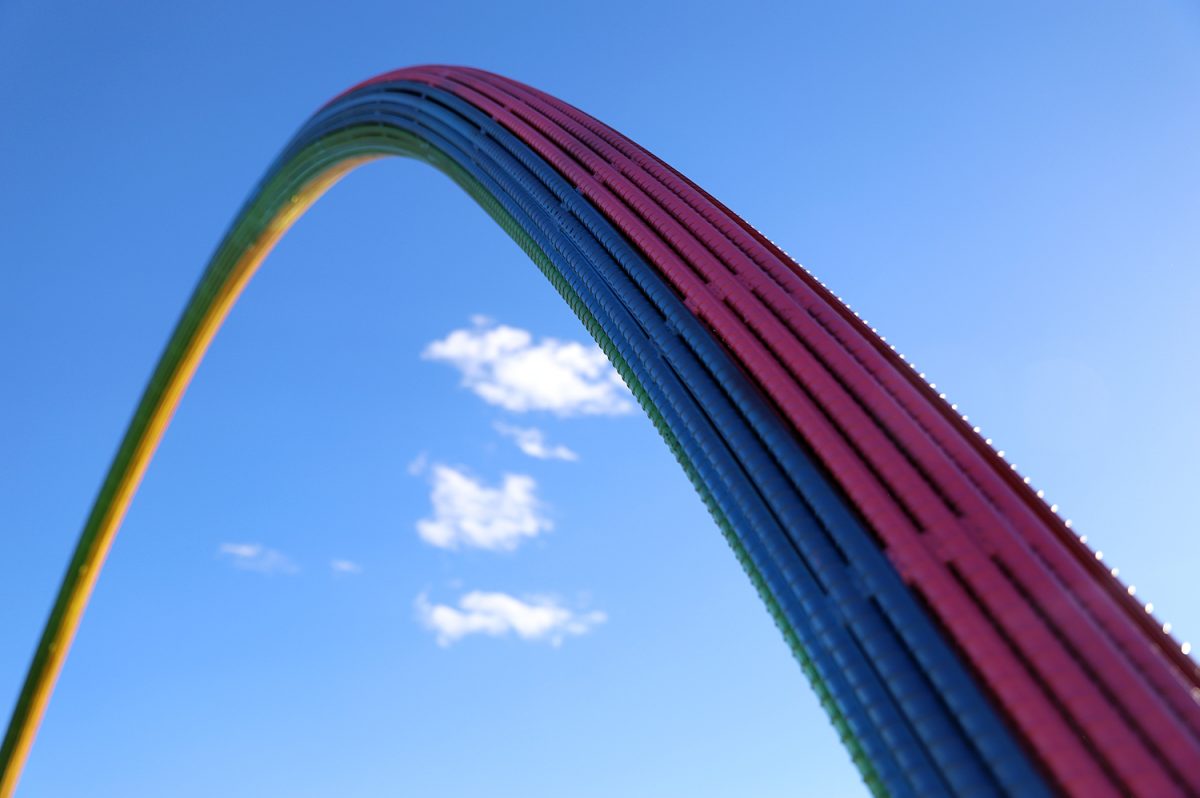 Camil’s work is an identical set of rainbows situated in Baja, Mexico & the Coachella Valley.
Historically, rainbows symbolize rain and fertility, Lover’s Rainbow is made from exposed and bent rebar stretching into the ground and acts as a symbol of hope in the desert land. 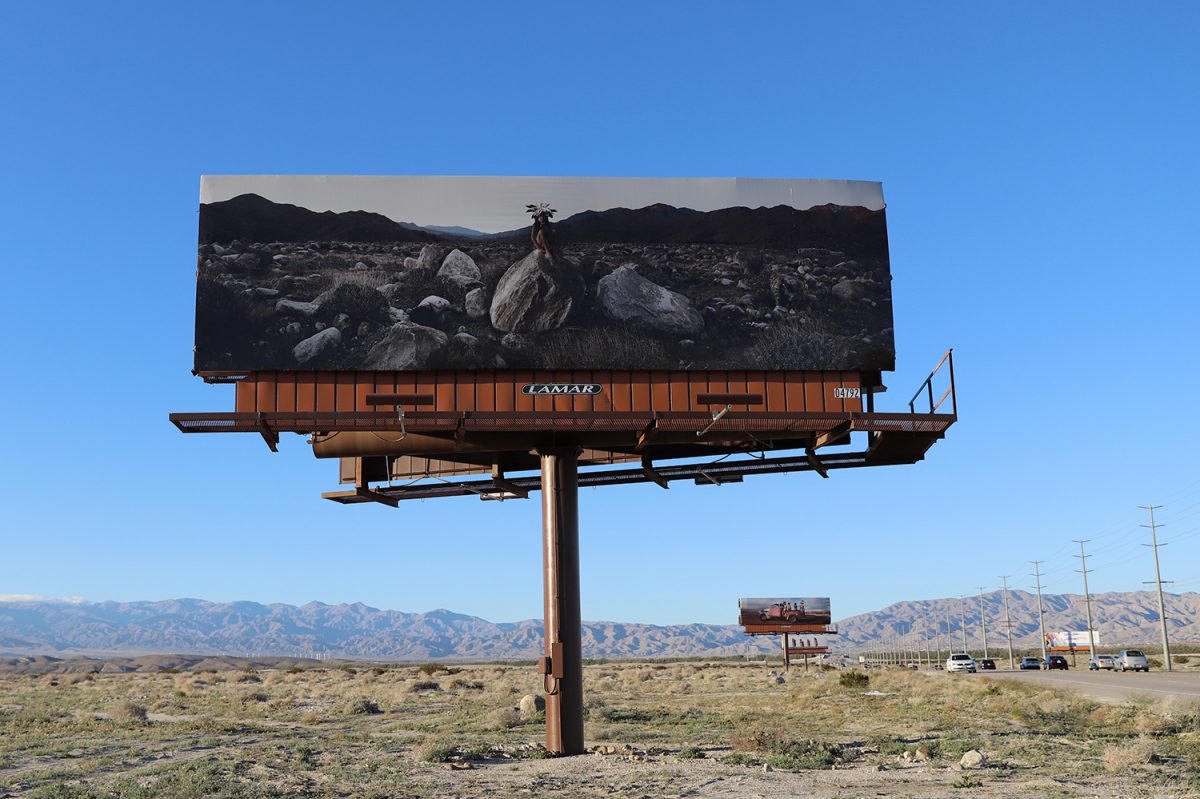 Care Romero’s Jackrabbit, Cottontail & Spirits of the Desert is a story told across five billboards set along a rather heavily trafficked highway in Palm Springs. The billboards feature four young travels tunnelling through time in their ancestral lands of the Cahuilla, Chemehuevi, Serrano, and Mojave. These images juxtapose past and present with the visual manifestation of oral tradition, bringing that visibility to the individuals, cultures, and history which continue to play a role on the land of the Coachella Valley. 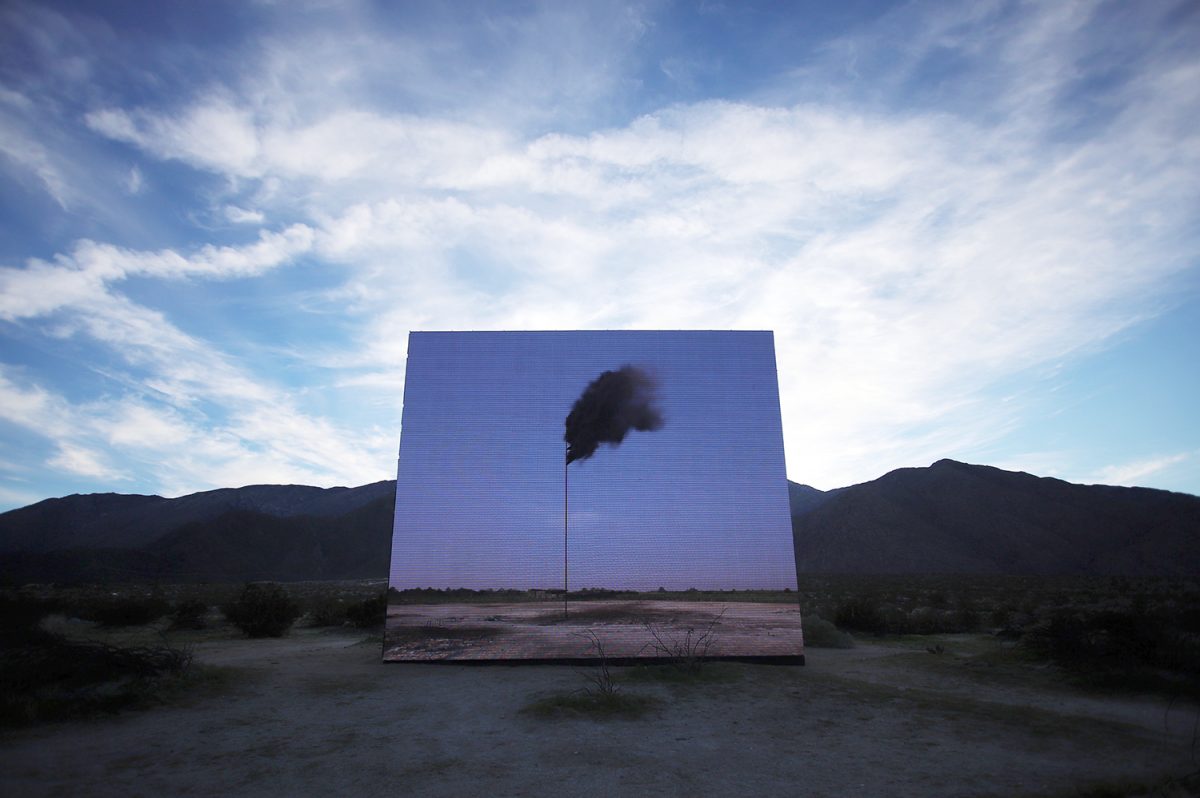 A towering screen set against the mountains showing a 15-minute digital simulation depicting the site of the world’s first major oil finds, in Spindletop, Texas. The video circles a black flag of smoke representing carbon monoxide in an attempt to make the invisible visible. Run live by software calculating each frame of the animation in real-time with the real site in Texas.

Eric Mack’s elegant transformation of a defunct gas station in the Salton Sea. Utilizing lush Missoni fabrics, ‘Halter’ creates a space for reflection within the already striking landscape of the area. The constant shifting and movement of the fabrics draped over the iconic Southern California building transformers the landscape it is in. 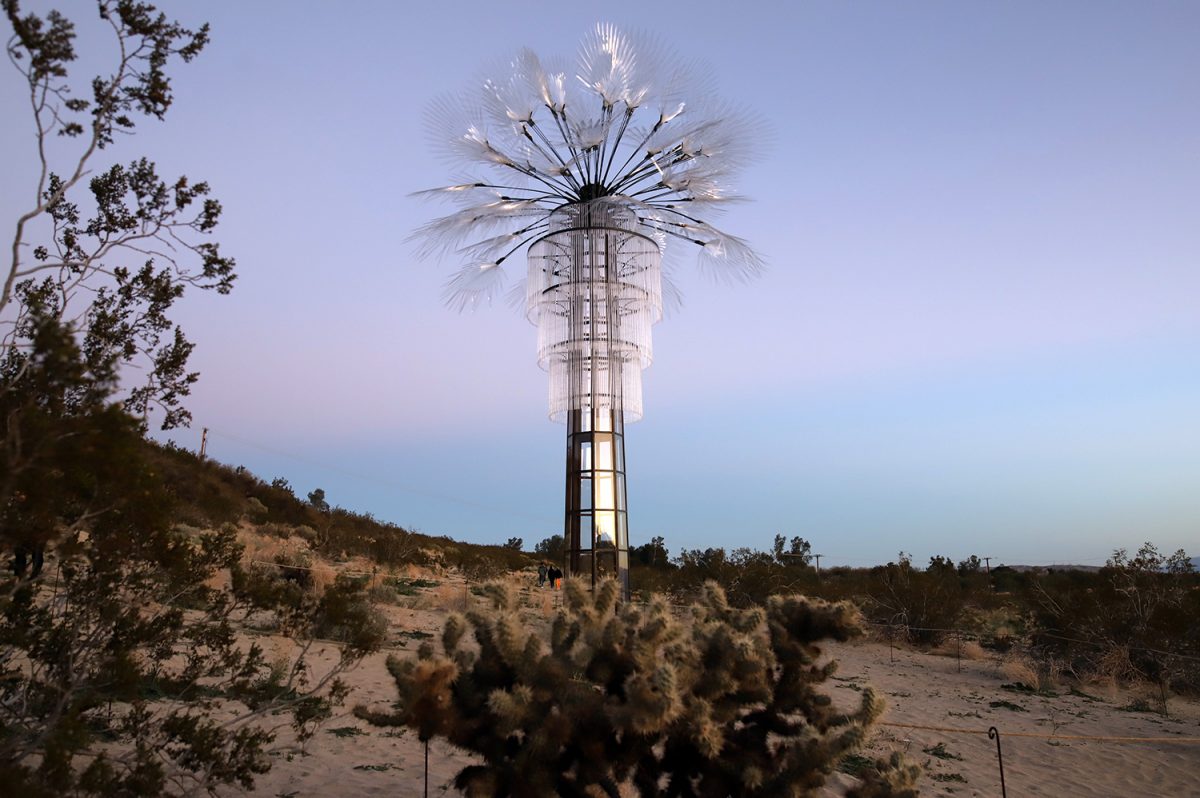 Ghost Palm is a meticulous reconstruction of the largest palm tree species native to California, the Washingtonia filifera (desert fan palm).  Intentionally placed on a plot of low desert, between the ever-present San Andreas Fault path, Ghost Palm is a physical manifestation of the tenuous balance between fragility and power. Standing over 20 feet tall, the piece is constructed with manmade materials: steel, plastics and glass. The piece is visually transparent and appears almost invisible until it catches reflections of light. 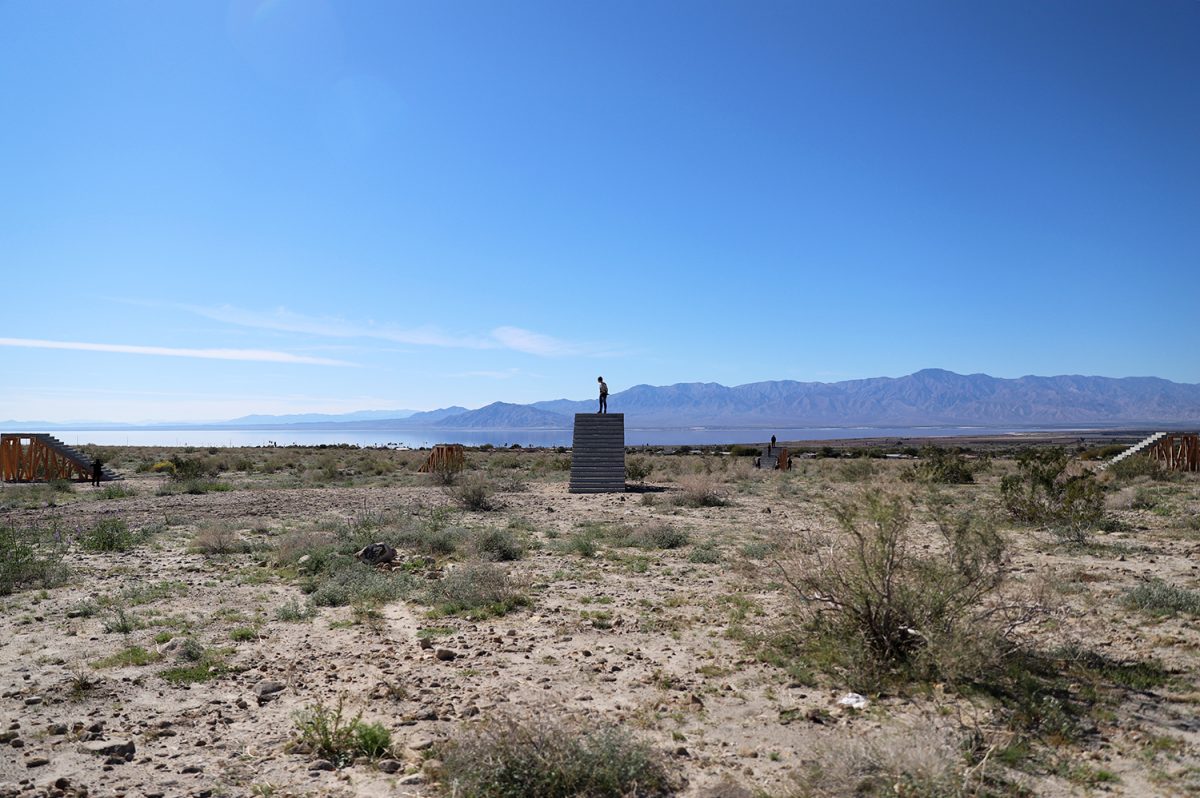 A Point of View is an interactive sculpture created by Bogotá-born/Paris-based artist Iván Argote. The piece, five concrete stairs was installed at an elevation above the Salton Sea on the North Shore.  The five sculptures have been placed in such a way as to function as sundials representing time in fragmentation with the new structures built upon the seashells and imprints of marine life from centuries.