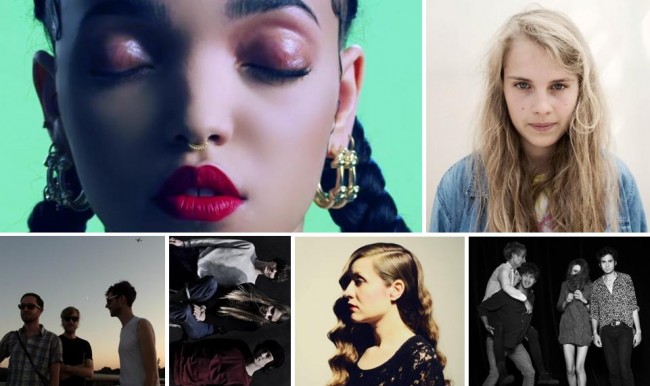 2013 has been an overwhelmingly great year for music and it’s made it harder to know who to pay attention to as a listener and getting attention as a new band to one-up the current acts. Sidewalk Hustle’s got your back on this one.

Trying to represent all the great sounds we discovered this year is almost impossible but we put up a narrowed-down list together to give you a heads up of some of the bands we’re excited about and who will hopefully step up and cause a stir in the new year. Some have been quietly amassing a following over the past year in the local circuit and blogosphere while others have still yet to break out but all deserve a good push into the spotlight.

Working alongside breakthrough producer Arca, FKA Twigs has created a distinct, gritty sound with her unshrinking sexual lyrics and seductive vocals, giving a nod to the revival of 1990s trip-hop and bass music in the UK. Her songs bear strong links to James Blake and they’re often compared to Portishead while her electrifying and stylized sound is often complemented with intricate choreography in her captivating videos, making the whole experience inerasable.

Maricka Hackamn has been on the radar for the past year but 2014 should be a promising year for her to make her mark as a voice to remember. The folksy singer channels Nico and Laura Marling with her hushed layered vocals and strings. Listening to her track “Retina Television” shows that she is more than a girl playing guitar but can really experiment with more alternative sounds and is a voice that should be heard in the New Year.

Hailing from Montreal, CTZNSHP is an incredibly promising trio who we predict will have an exciting 2014. They will officially release their debut album, Doom Love, in 2014. Their preview tracks on their bandcamp site are nothing but ethereal and infectious. The shoegazy fuzz of the guitars and the soaring hazy vocals create images of nostalgic vignettes of fleeting memories of childhood that we can just sink into and fade away.

Jessy Lanza offers a futuristic take on smooth electronic/dance meets soulful pop. As a singer-songwriter and producer, Lanza studied music theory and jazz at Concordia University and infuses elements dub, disco and R&B to create a unique sound. She released her first album, Pull My Hair Back, in September with UK indie label HyperDub,

North London group lead by soft-spoken Ellie Rowsell has been increasingly gaining popularity over the past two years. Armed with an EP, Blush, and a couple of singles, their sound is vulnerable that tugs at the heartstrings and hides underneath grungy lo-fi instrumentals. They’ll for sure garner some well-deserved attention in 2014 in North America as they prepare to play shows here including SXSW in March.

23-year-old singer/songwriter, Tamsin Wilson, is behind the four-piece folk act based in New York. She has already toured with the lovely Daughter throughout east coast and Canada and has gained an incredible response. Wilson’s voice is delicately balanced against the guitar-picking arrangements delivers a sound that is unexpectedly larger than what seems so simple. Be sure to also check out her beautiful and haunting cover of Grime’s ‘Oblivion’.

Warm tones of their lush synth and ethereal and their dreamy vocals make up the hypnotic kaleidoscope vision of the current music project of the former members of London group, S.C.U.M. The sound places a big emphasis on dreamy analogue synths and pressing drum machine that will for sure turn you into a happy daze floating through a cosmic swirl.