Monday marked Apple’s first in-person Worldwide Developers Conference (WWDC) since the world came to a crashing halt due to the pandemic. Taking place at the beautiful Apple Park in Cupertino, the excitement to be back was palpable and electric. The event featured a host of exciting announcements including a first look at the new iOS 16, an all-new MacBook Air and MacBook Pro 13″ now powered by the new M2 chip, new innovations for the Apple Watch including Sleep Insights, and probably the most hyped and long-awaited new feature that allows you to retract or edit a message after sending in iMessage. Finally!

To help navigate all the new updates and features announced we put together this handy list of what we think are the most exciting to help you cut through all the chatter and see what’s popping. Here we go! 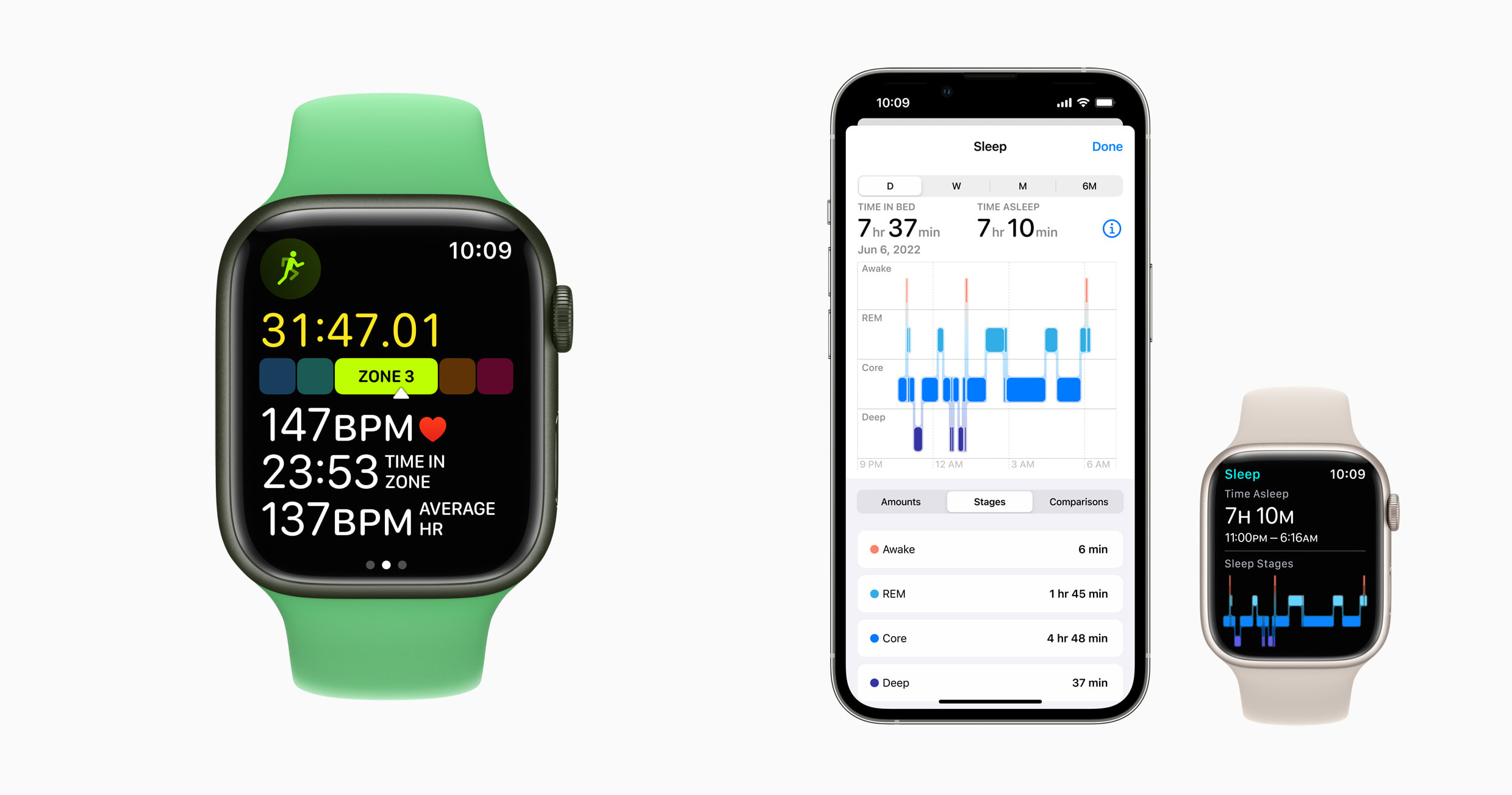 Your favourite accountability partner just got a fresh upgrade with watchOS 9 and new customizable faces. The most notable new features coming for AppleWatch include an enhanced Workout app which will now measure performance, the ability to rotate between different training styles with Multisport as well as track Heart Rate Zones. So if you like to crush out a weight training workout then jump on the Peloton or go for a run or swim, you no longer need to start a new workout and instead seamlessly switch between Workout Views without missing a beat.

They’ve also introduced new a Custom Workouts to better track your rest between intervals, which includes new alerts, pace, cadence, power, and heart rate to help you through your workout. For runners they’ve added new metrics including Stride Length, Ground Contact Time, and Vertical Oscillation, to help track trends and learn from patterns over time. Swimmers will also see enhancements in Pool Swim with the addition of a new stroke type that uses sensor fusion to detect when users are swimming with a kickboard or classify the stroke type while tracking total distance.

Apple continues to help prioritize recovery, overhauling the Sleep experience. Apple Watch is now able to track sleep stages including REM, Core, Deep Sleep, and time awake through signals from the accelerometer and heart rate sensor, adding to the Wind Down and Bedtime features. More detailed information on sleep stages including HRV, respiratory rate and sleep comparison charts will be available on Health app on iPhone, but no news on whether they will offer sleep and readiness scores or more nuanced data than competitors like Oura Ring currently do. Users will also be able to contribute their sleep stage data in the Apple Heart and Movement Study via the Research app to help provide more insights on the science of sleep. 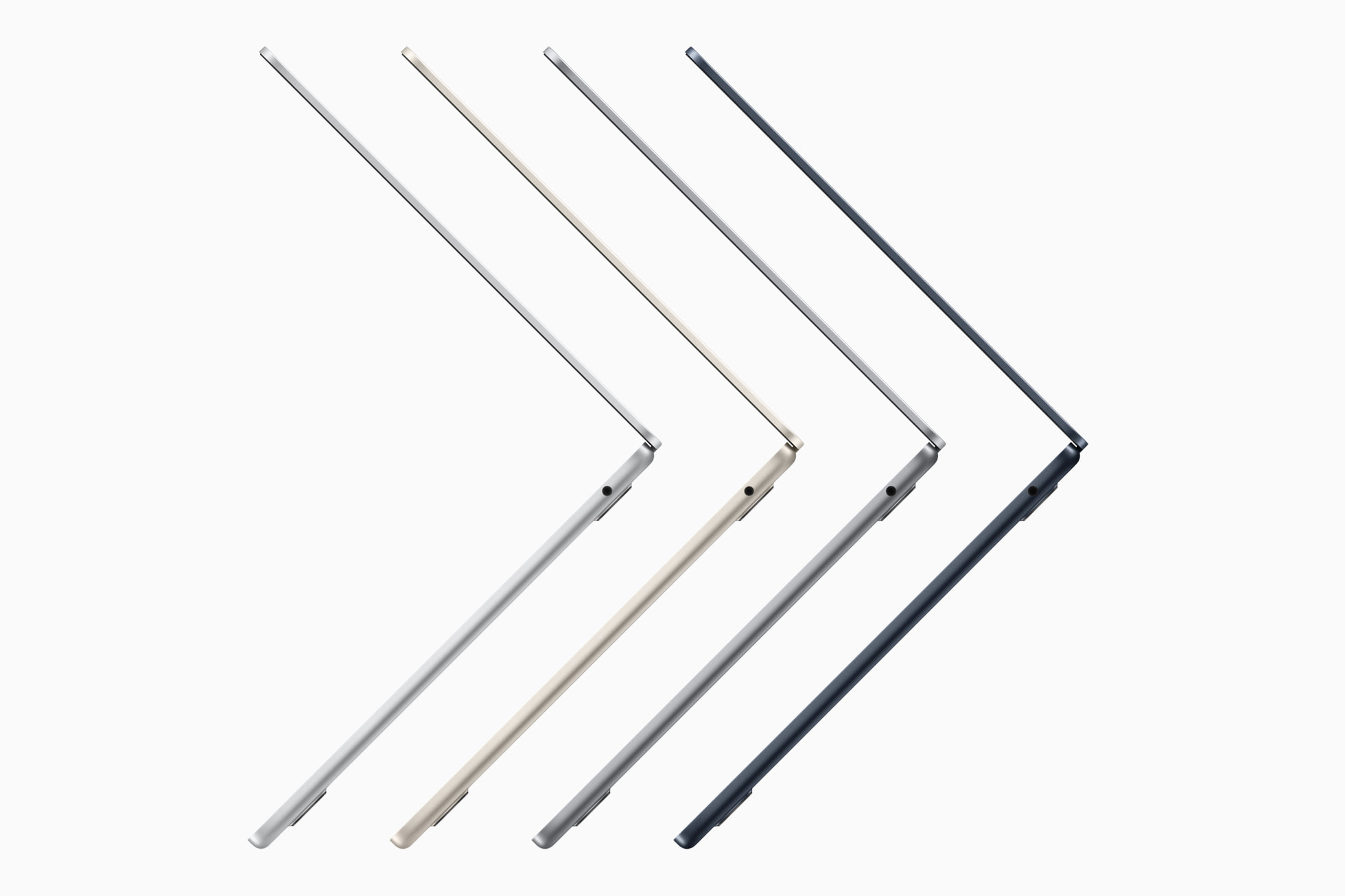 A New MacBook Air with M2

Probably the most exciting new announcement was a newly redesigned MacBook Air powered by a new M2 chip. With a 13.6-inch Liquid Retina display, 1080p HD camera, and 24GB of unified memory, the new MacBook Air will be available in four finishes silver, space grey, midnight, and starlight with matching magsafe chargers. The new redesign features a 20% reduction in volume, an all-aluminum unibody which measures 11.3 mm thin and weighs 2.7 pounds. The fanless design features up to 18 hours of battery life, a four-speaker sound system, Touch ID, an industry-leading Force Touch trackpad, two Thunderbolt ports, and a 3.5 mm audio jack.

They also announced M2 in the new 13-inch MacBook Pro coming next month including 24GB of fast unified memory, ProRes acceleration, and up to 20 hours of battery life. 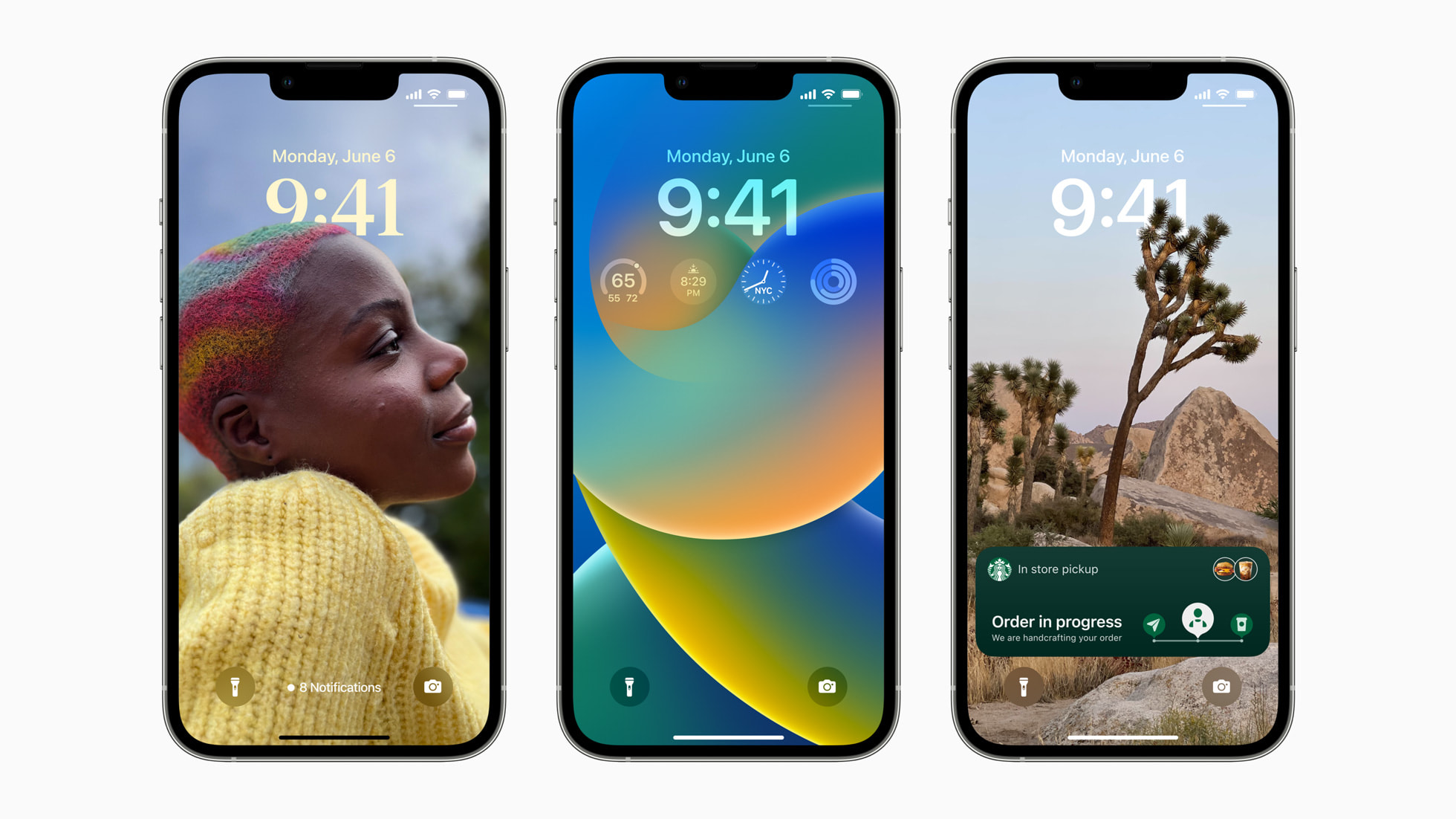 Perhaps one of the BIGGEST new features announced by Apple comes in the form of an all-new Lock Screen experience. While this may seem rather anticlimatic on the surface this is the biggest update to the lockscreen Apple has ever done. Ever. Instead of the generic same same lockscreen everyone has, now you can make the experince personal, thanks to the iOS 16 update.  Users are able to change the look of the date and time with several new type styles and colour choices. The new multilayered effect lets your Lock Screen photos be the work of art they are, with the pics actually taking precendant over informational stuff, making the expeince of quickly looking at your phone easier and more a reflection of you.

In additon to the above mentioned, for the first time the Lock Screen will feature additional informational widgets, inspired by Apple Watch complications that allow you to further personalize your phone with the stuff you really need. Making getting the information you personally want ar a glance, including calendar events, weather, battery levels, alarms, Activity ring progress, etc etc. In addition users can create Lock Screens using their favourite emoji or colour combinations AND create multiple Lock Screens that you can cycle through with just a swipe.

The new Lock Screen features are plentiful and once you update your device to iOS 16 you will surely have a ball uniquely personalizing the experince to reflect your needs. 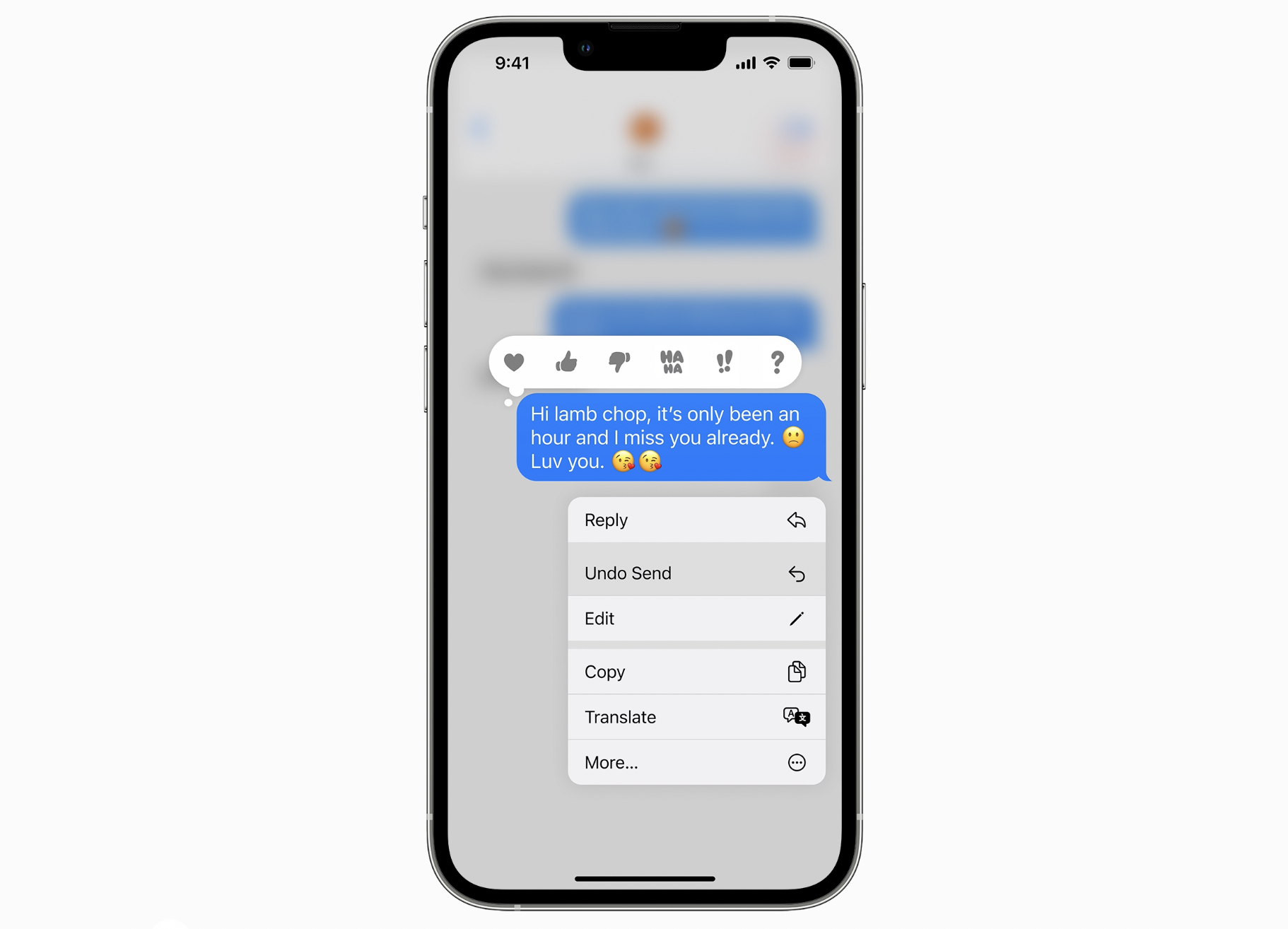 Along with the iOS 16 update a slew of new features designed to help productivity and even help avoid embarassement have been added. The first comes in the form of a much needed update to Messages. This one is big. Now users can edit or recall recently sent messages, recover recently deleted messages, and now mark conversations as unread so they can come back to them later. Let’s take a moment to let that sink in. Now you can unsend that embarassing message you accidently sent to your boss, trash talking them, instead of sending it to your collegue. This feature still can’t save you from yourself fully as you have 15 minutes to edit or undo send that message, anything beyond that is on you.

Messages isn’t the only feature to get beefed up, Mail is coming out bigger and better than ever with a serious update that makes it that much more powerful tool. Now when you are writing your late-night “circling back” emails, instead of sending them at 3 am and looking like a crazy workaholic who has no boundaries, you can now schedule emails ahead of time! It may seem like a little thing, but how many times have you had a half dozen emails sitting in your Mail waiting for you to wake up the next day just so you can hit send, only to find out your computer did a late-night update and *Poof* gonzo?

In addition to scheduling there is also a new cancel feature so you can recall those half-finished emails you hit send on accidently while juggling hot coffee and walking without looking unprofessional. Each email will be given a “moment” to cancel the delivery before it reaches the recipient’s inbox. Mail also can detect if you forgot to include an essential part of the message, like adding that “see below” attachment. Mail will also resurface a message at any date and time with Remind Later, and Follow Up suggestions automatically reminding you to follow up on an email if you haven’t received a response. FINALLY, and honestly, most importantly, Mail has updated its search. Do you ever look for an email you know was sent in the last week, so you go to the search bar in Mail, and it pulls up emails for six years ago? Then you start to scroll to find one that is actually relevant but you can’t so you just have to scroll back through a weeks worth of emails to find what you are looking for, the whole time just cursing out this useless search option? Yeah, us neither. Now Mail uses state-of-the-art “techniques,” that will deliver actually relevant, accurate, and complete results. Sounds amazing! 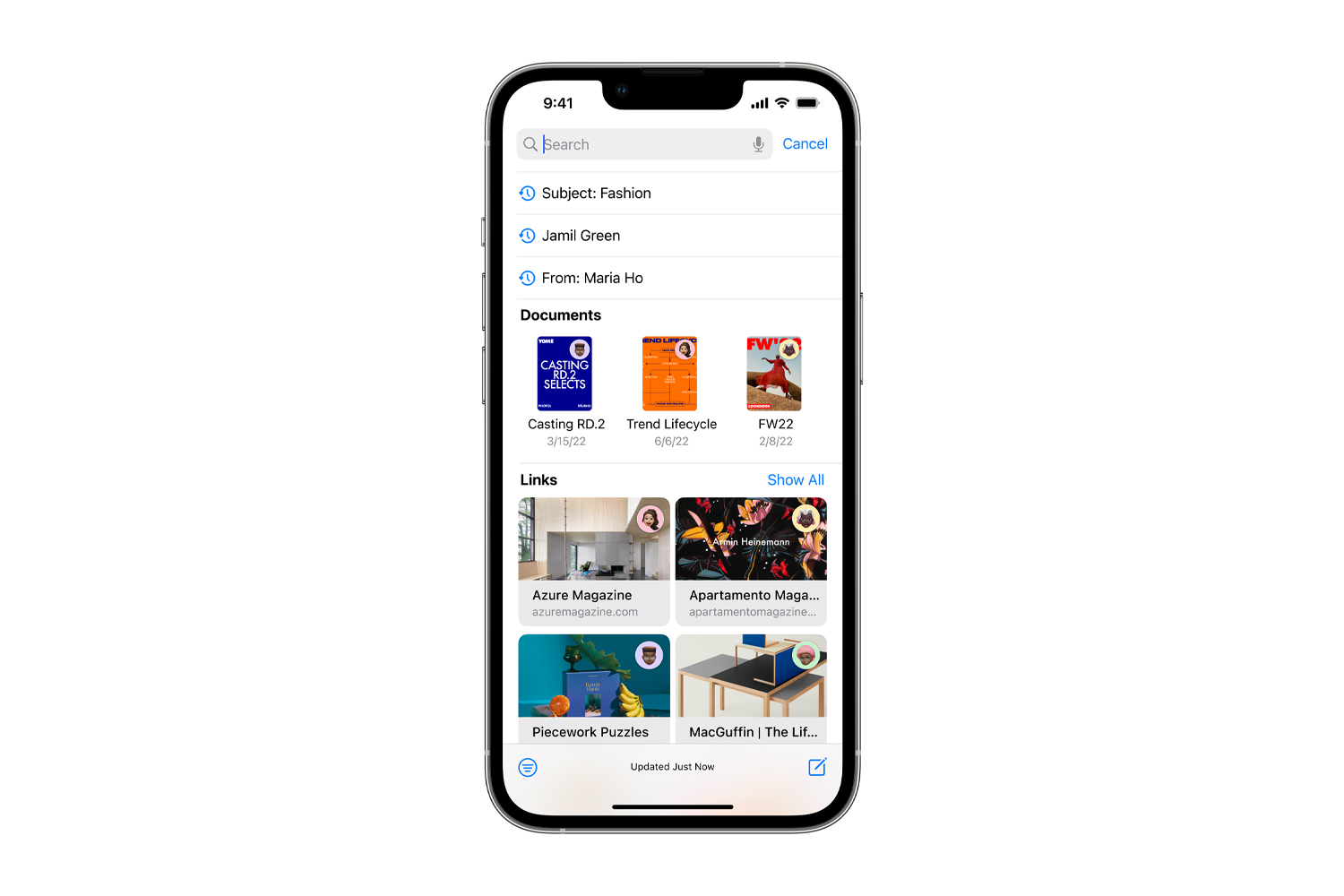 With all the features we mentioned above plus everything else announced at WWDC, iOS 16 is looking to be one of the most significant updates to the overall operating system we have seen in years, if not ever. 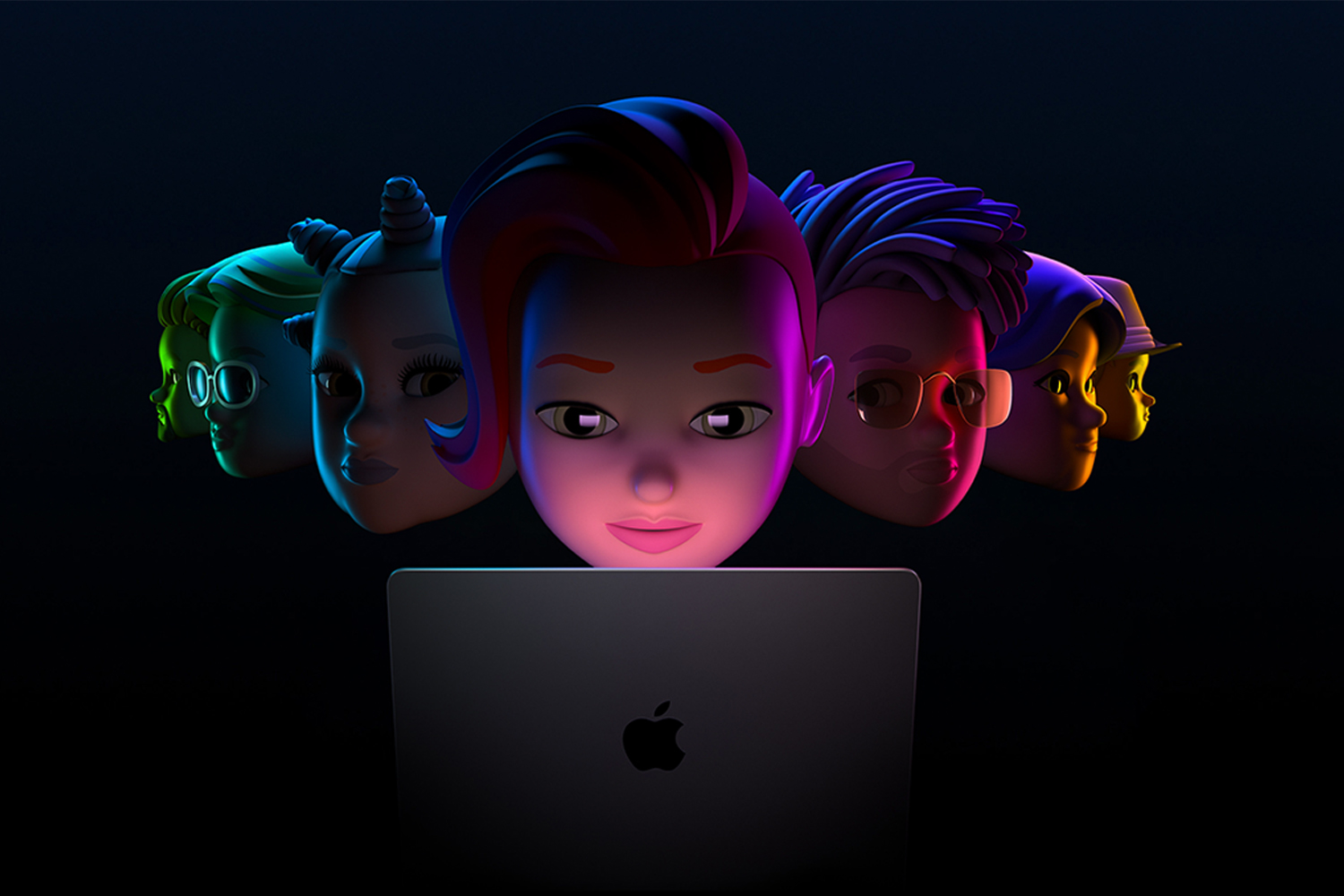 Like what you read? Be sure to update your Apple device as soon as it is available and be sure to show us your Lock Screen on social!