Luxury SUVs aren’t a road less travelled for all-electric vehicles but it’s a category that looks poised to grow a lot in the coming years. Volvo is only the latest to jump in, and the XC40 Recharge rolls with some expansive features that help make it a pretty smooth ride.

Given its status, the XC40 Recharge isn’t going to be super cheap at $64,950, but it’s also not luxurious enough to be out of reach for an overwhelming majority. Only thing is, you will have to get your hands on it by way of purchasing or leasing it, as it isn’t part of the Care By Volvo program. That’s the subscription-based program that gives you an S60 or V60 R-Design for up to a two-year commitment for a monthly fee.

Those cars aren’t electric vehicles (EVs) like the XC40 Recharge is, and that’s what really sets this one apart from the rest of Volvo’s lineup. It’s a pretty spacious model coming in eight different colours, and no other trims. What you see is what you get with this set of wheels.

Normally, I would get a weeklong test drive, but as with all things these days for safety reasons, I took a much abbreviated full day test drive instead. While not as long, I got a good feel for the SUV, driving it all day to see what it’s all about. Much like the EV tech under the hood, there’s also some things to write home about within the interior, too. 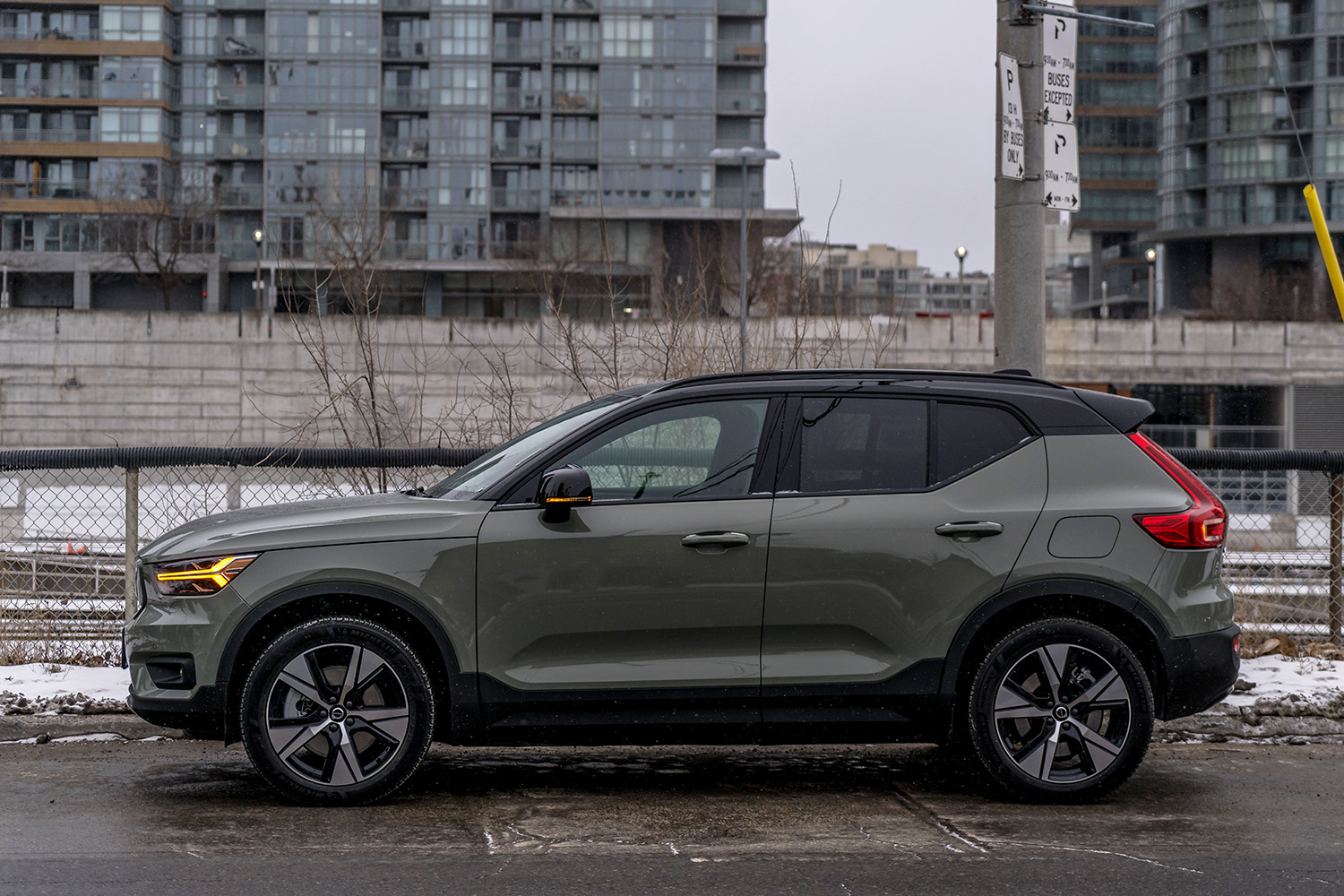 As quiet as EVs are, it’s always nice to feel smooth when roving just about anywhere, even if it is on some of the poor-conditioned roads in Toronto these days. Unlike a typical combustion SUV, there’s not a lot to get the XC40 Recharge going. Keyless entry is easy enough as the door unlocks by getting close enough to it, press the button to start up (with foot on the brake), put it in drive, and that’s it.

One thing I’ve always loved about EVs, going all the way back to my first week driving one in 2012, is the torque they dish out. There’s 486 pound-feet of torque in this, and a big reason why it can hit 100 km/h in just 4.9 seconds. I was actually surprised it has 402 horsepower, as it’s not the kind of power I would associate with an SUV like this one, but there you have it. 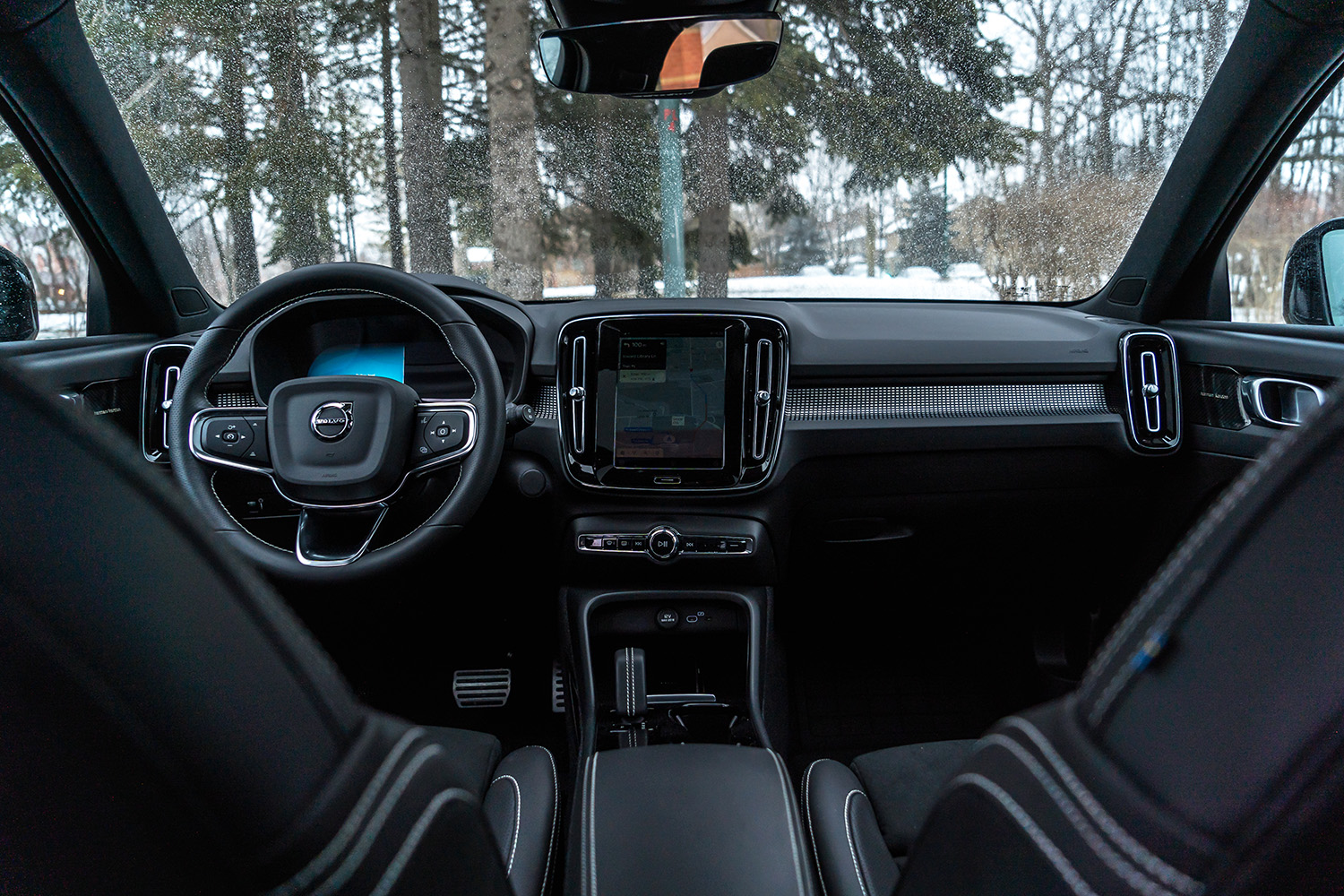 It also has a unique braking system that lets you only use one pedal. I wasn’t sure exactly what I was doing at first, but basically, when I let up on the gas — I mean, the accelerator pedal, the car would start to brake slightly, much like easing your foot onto a brake pedal. There were times where I didn’t really touch the brake pedal at all. This isn’t really a Volvo invention, but something you’re bound to see on EVs in a general sense. Still, you can turn it off if you want to coast like you normally would in any other car. Either way, any time the XC40 Recharge brakes, the regenerative braking system takes the kinetic energy from it and funnels power back to the battery.

The XC40 Recharge is definitely more of a crossover than a traditional SUV, but I can see how some might blur that line while looking at, and driving in it. It also just looks nice, and the sage green colour I had did grow on me over the course of the day. 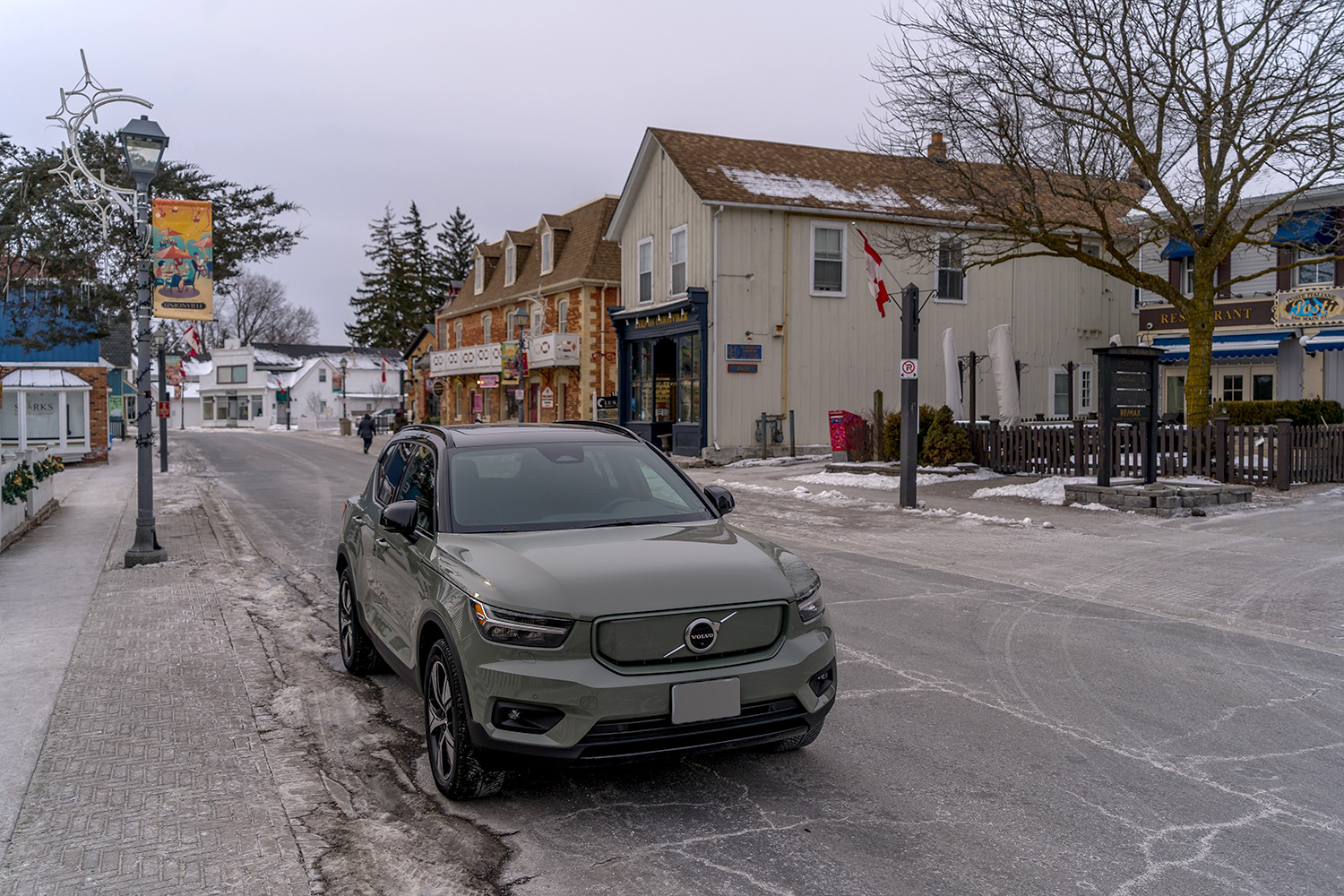 Volvo rates the XC40 Recharge’s range at 335 km, but as is always the case with EVs, it’s something of a floating number. Since the battery is also powering things like the heat/AC, lights, infotainment system and interior charging ports, it could always nudge down a bit.

I didn’t drive enough to get down that far, but I did bring it back with about 40% to spare. Had I been at (or close to zero), and gone to a 150kW charger, it would take 40 minutes to get to 80%. On a 220-volt Level 2 charger, like the one you would use on a washer and dryer, it would take eight hours to get to full. Like fast charging on smartphones, it’s a sprint to 80%, and then a slow trickle for the rest.

Though I didn’t get to try it, there is app integration here, letting you plan ahead for charging en route to somewhere. Or, when plugged in at home, you can set it to only charge at off-peak hours to save on your hydro bill. 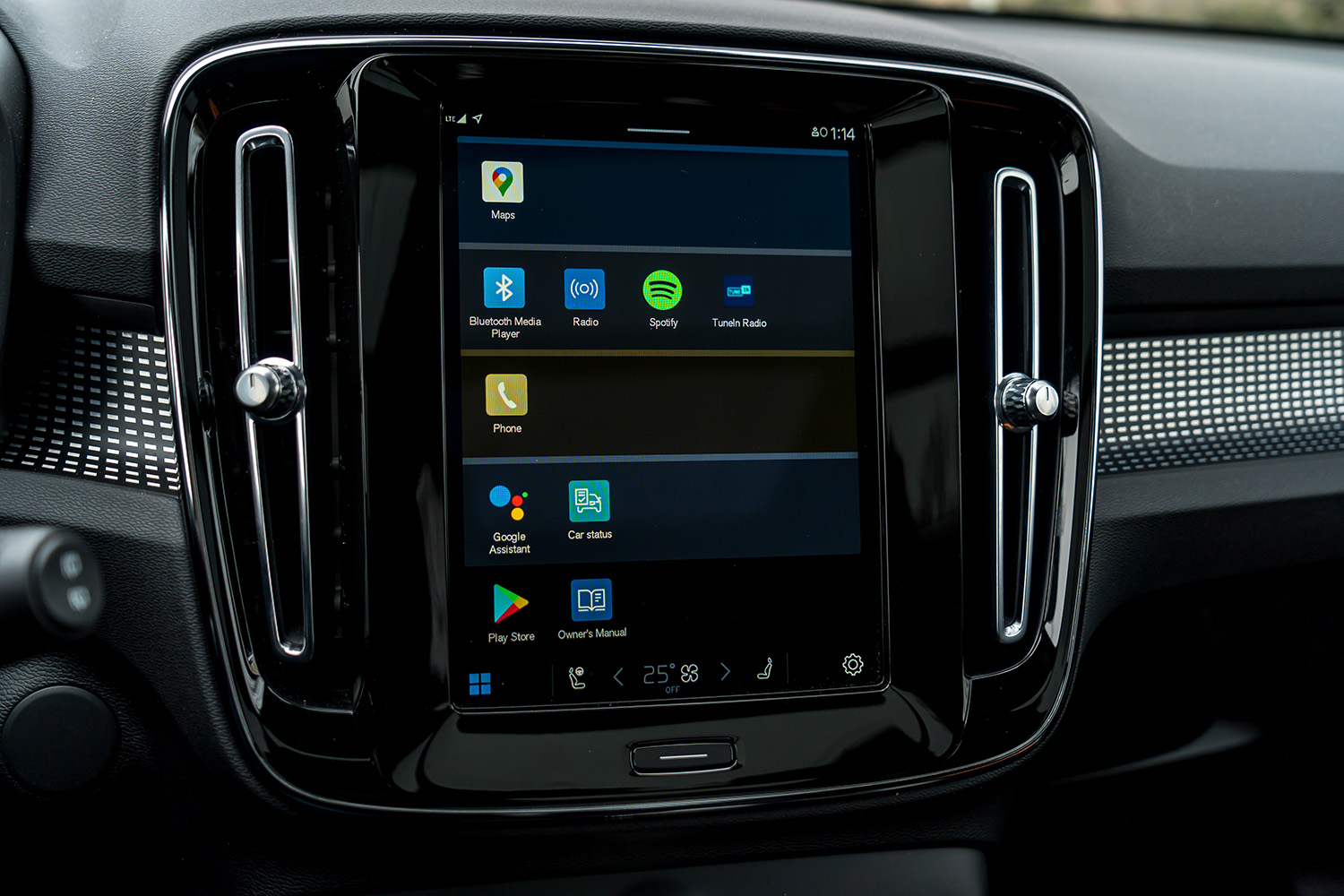 Let’s get one thing straight — the XC40 Recharge runs Android Automotive, which is different from Android Auto. What’s the difference? Automotive is built into the vehicle’s system, whereas Android Auto runs off your phone onto the car’s system. They are two different software architectures, and as such, work in separate ways.

For instance, you won’t need to plug in your phone to use Google Maps or stream music from apps, like Spotify, Tidal, YouTube Music and TuneIn. It has its own Google Play Store where you can download apps directly to the car from the 9-inch screen in the middle of the dash. The store doesn’t have every app available, including all those you might use on Android Auto. One big omission so far is Waze, though it’s not the only one.

The thing about having an embedded system is you get some perks to go with it. You can stream from these built-in apps, or navigate on Google Maps all you want without paying a dime for the data to do it. Volvo foots the bill for the first four years, meaning any apps that need data from Android Automotive won’t be burning a hole in your pockets.

One cool thing about having Google Maps so tightly integrated is that the mapping info shows up on the 12.3-inch screen facing the driver behind the steering wheel. Passengers can still see what’s going on the main screen, but drivers can get a good look at all directions within their line of sight. Maps also notes how much range the crossover SUV has for any route, and can point out charging stations on the way. 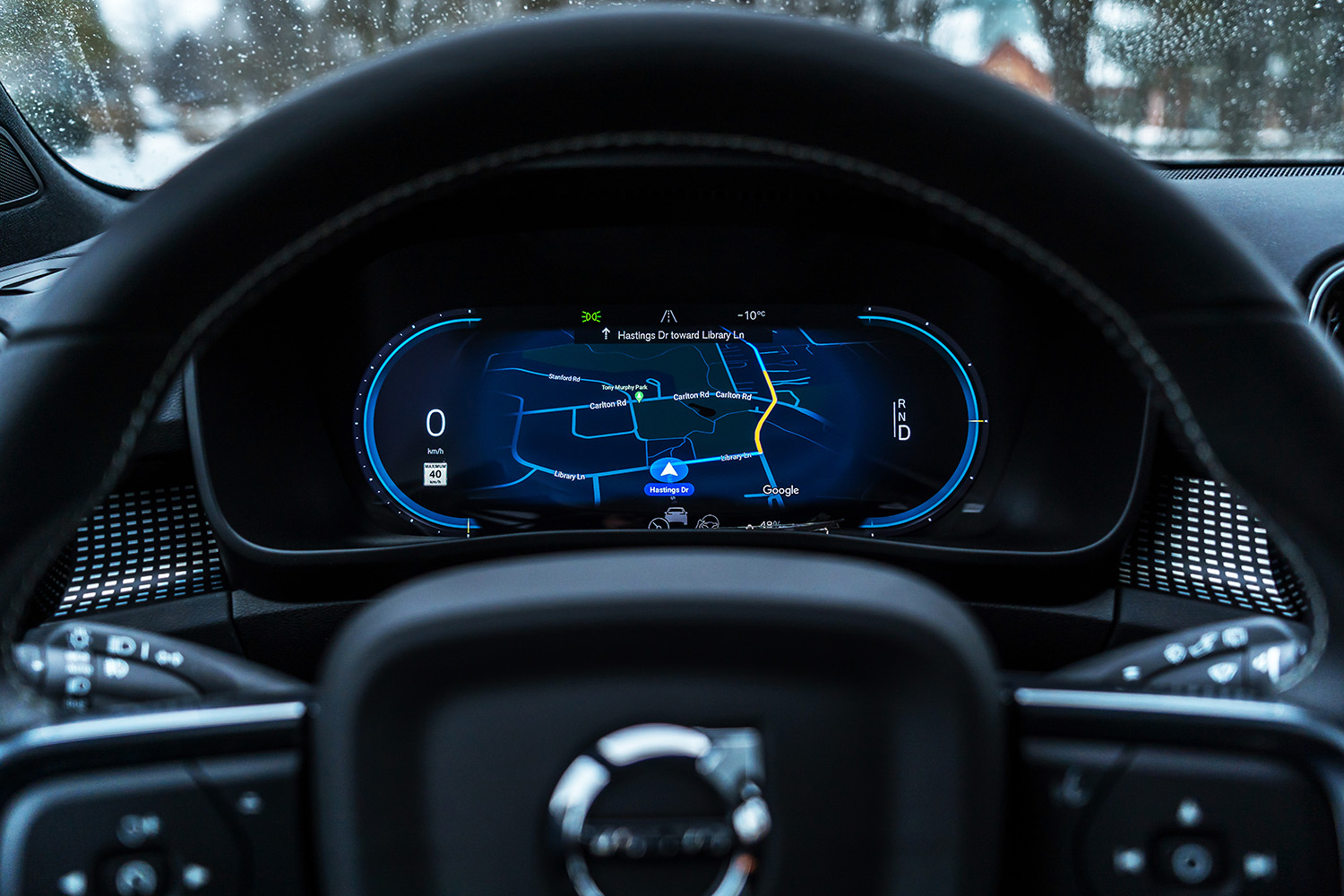 This also means Google Assistant takes over as the voice assistant in the car, and that also gives it control over in-car climate. When I pressed the steering wheel’s voice button and said, “turn up the heat in here,” it raised the temperature. When I said “set the fan to 3” it did just that. If I wanted to play music on Spotify, or tune to a specific local radio station, it was no problem at all. And if I wanted to control a smart home device while driving, like turning on lights or a garage door opener, I could do that, too.

Volvo says that it will allow Android Auto to work in the car if drivers prefer to use it, only that when they do, they’ll be using the data from the phone, not the car. And iPhone users can also rejoice because CarPlay will also work in the XC40 Recharge. And both can work wirelessly, letting you place your phone on the wireless charger inside. I wasn’t able to test out either Android Auto nor CarPlay because Volvo will flip the switch on those with an upcoming over-the-air software update. 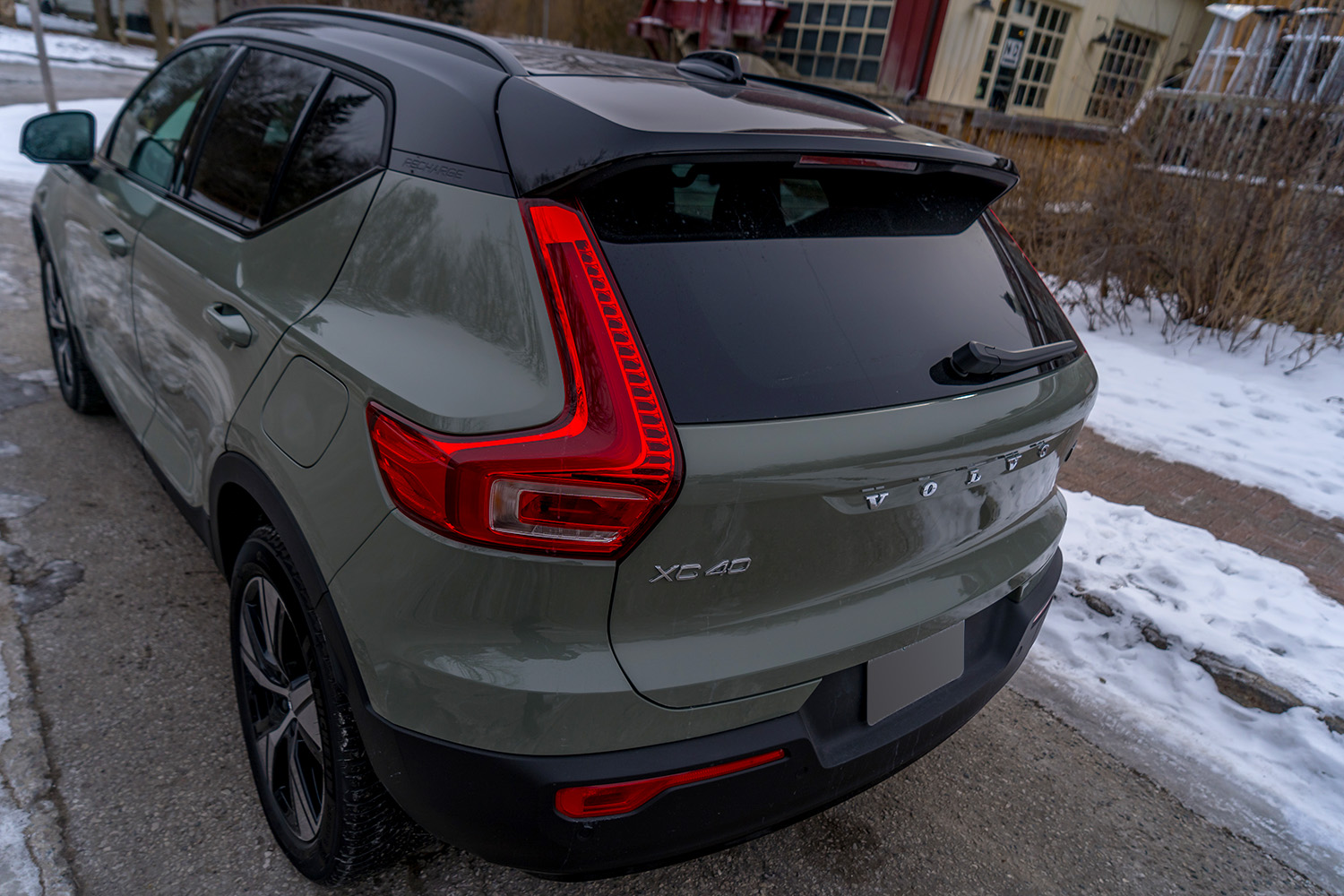 The XC40 Recharge is something of an outlier because it is an EV, but that won’t be for long as the years carry on. All automakers now have all-electric vehicles either in market or on the way, so this is just the latest. The challenge is making them affordable enough for the average driver. One of the bummers here is that this one from Volvo doesn’t qualify for any government rebates to cut the cost down because it’s over $60,000.

For those who could afford it, it is a nice marriage of comfort and technology. You get Volvo’s City Safety crash prevention features, plus Pilot Assist for those scary moments when a driver might be incapacitated. There’s no real driver autonomy here, so it won’t drive itself, in case you’re wondering about that.

And if you do have some range anxiety over how far you can go with the rated battery life, you probably won’t be in bad shape, especially if you have a charger at home or somewhere nearby.