2020 Porsche Taycan: Driving into the future

Driving an all-electric car is a unique experience, but when it’s something as good as the 2020 Porsche Taycan, the feeling is magnified.

Let’s not get it twisted, though — this is an expensive ride, starting at $119,400 for the 4S trim, and going all the way up to $213,900 for the Turbo S trim. The Turbo trim — the middle of the other two — is what I got to drive for a weeklong test drive. It not only felt like a different way of driving, but also a different way of thinking when it comes to what a future vehicle should be.

By now, it should surprise no one that an electric car can rival the power of a combustion engine. Electric cars have better torque, giving them better acceleration, and the Taycan (pronounced tie-kahn) is the first to have a two-speed transmission. I won’t get into all the technical details of how that works because I’m not sure I fully understand them all myself, but suffice it to say, this thing is fast. So fast, in fact, I hit 100 km/h in just three seconds.

Zipping around with this car, whose low centre of gravity and wide base never felt out of step at any time, made handling feel like a dream. I could turn corners with an ease I’ve rarely experienced before. It was effortless to pass anyone on any road or highway, and the sleek design turned a lot of heads along the way.

It helped that I was comfortable. As a tall guy, I wasn’t sure how I’d feel, but was glad to see I could sit without issue in either the driver or passenger seat. The rear seats aren’t especially spacious if someone tall is sitting upfront, but it is possible to put four people in the car. If there’s going to be a fifth in the middle back seat, it better be someone really short. 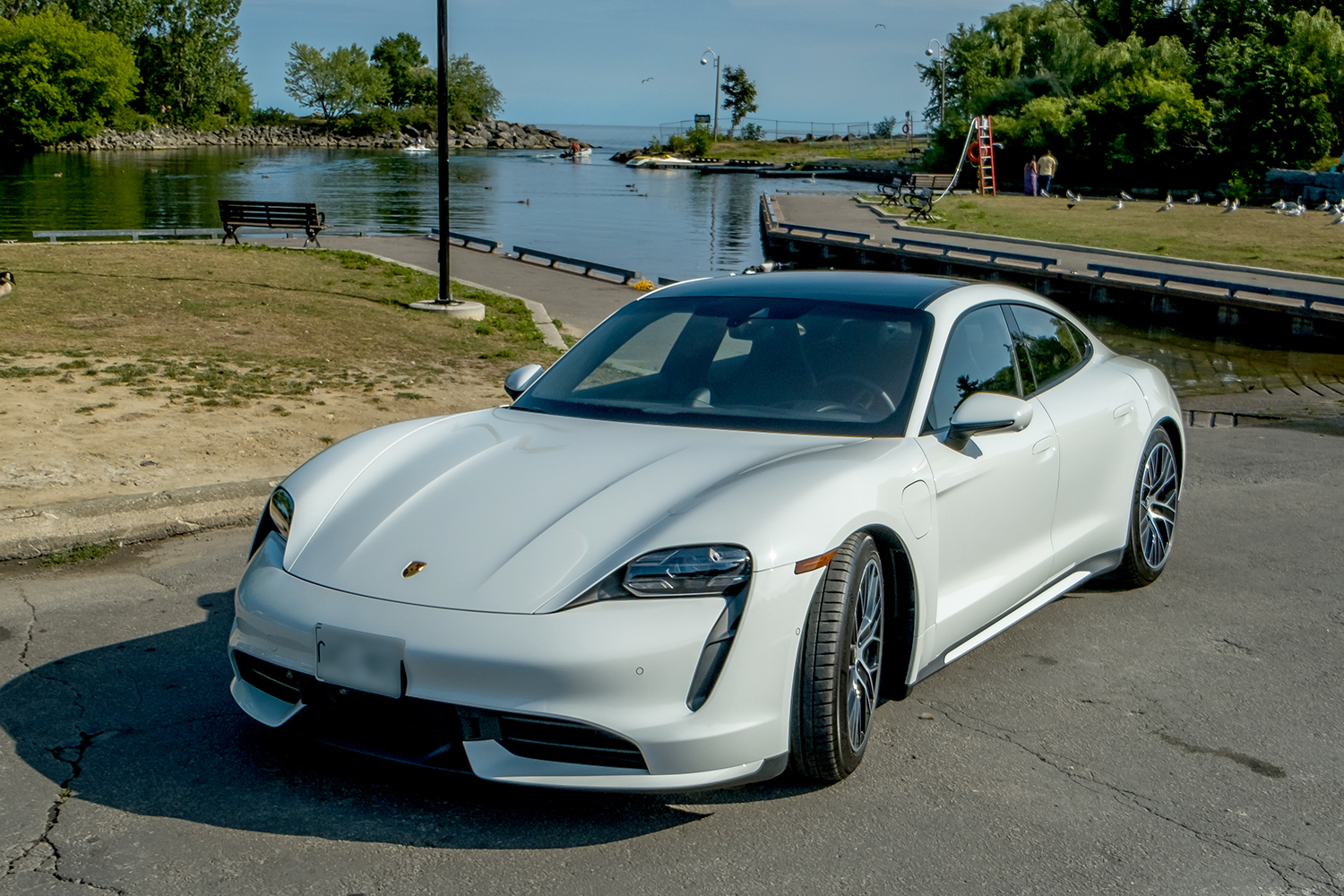 The Turbo’s range gave me about 450 km to start with when I first got in, though it’s a relative number. Air conditioning and heating are the biggest drainers outside of the electric motor itself, so if I kept it on blast, I saw the expected range drop, only to fluctuate back up again when I lowered the fan or turned off AC altogether.

Still, I never really felt any range anxiety because I knew when and where to charge it back up. Volkswagen, Porsche’s parent brand, has partnered with Electrify Canada, a company with charging stations, to make them available through an app called ChargingAmerica. The app shows all its charging stations on a map, and clicking on one shows how many there are, including voltages for each.

In my case, I ended up at one with a 150kW charge, which is modest by current standards. Unlike a gas station where you lift the nozzle, press the gas octane you want, and then start pumping, this is different. First, I had to confirm I wanted to charge, select the proper station (matching the number) and then go through a sequence to actually plug in the charger and get a current flowing through it. 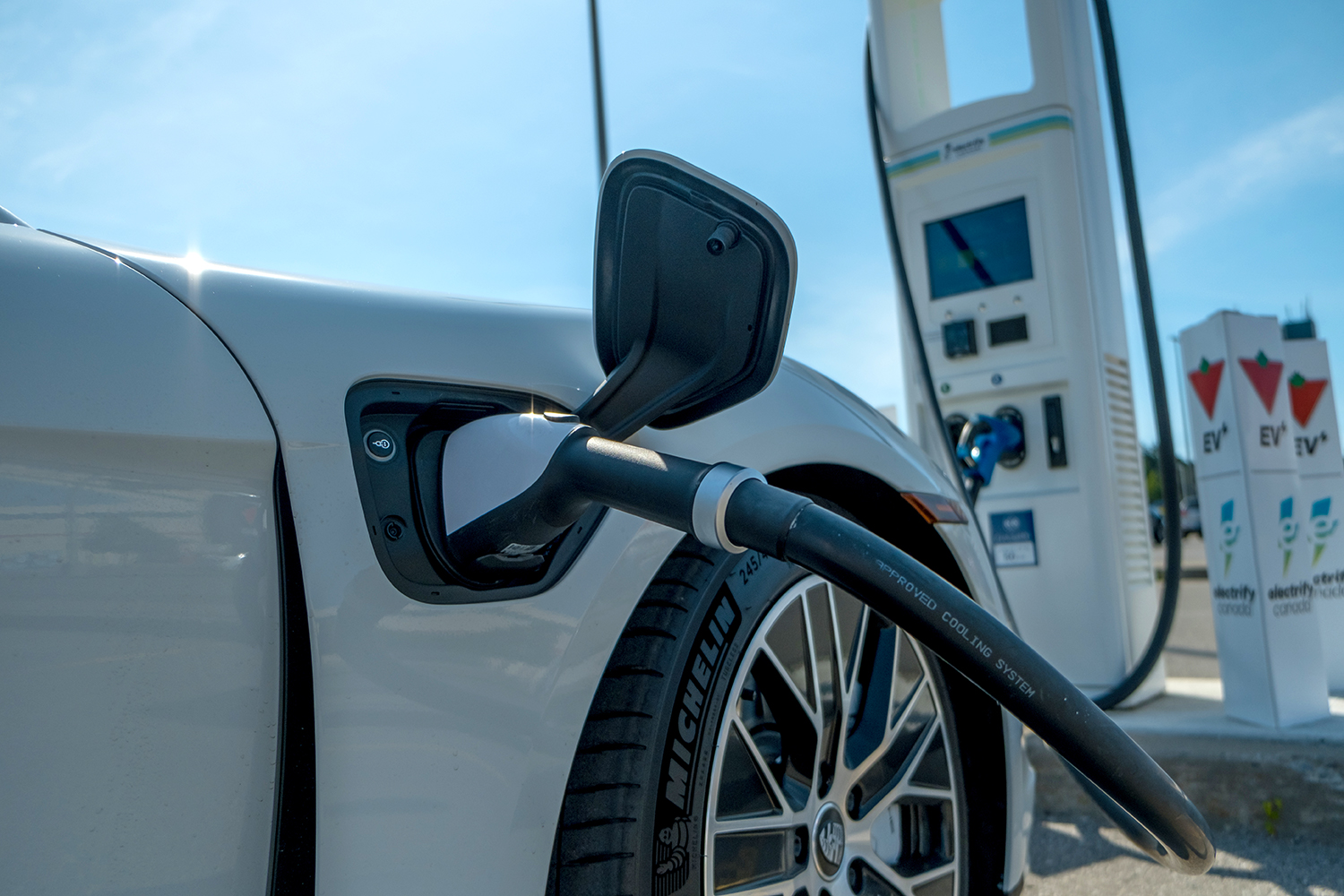 In a nutshell, it took 44 minutes to go from 26 to 96%. Like fast chargers for phones, these car chargers increase voltage up to 80% and then trickle it down after. For instance, I was going at 100kW at one point when hitting 50%, but was all the way down to a measly 5kW at 95%.

Had I gone to a 350kW charger (the Taycan maxes out at 270kW), it’s possible I could have cut down the entire charging time by half. The Taycan is the first electric vehicle built with an 800-volt architecture, making it capable of accepting faster charging speeds. The problem is that those types of chargers are few and far between in Canada.

Still, this was an experience. Electric vehicle charging will continue to go mainstream as more of them hit the road, but I certainly wouldn’t want to wait 44 minutes on a regular basis. Luckily, the car’s heating or AC can be on while charging, so you can stay inside the car if you want, or pop in for a coffee if there’s a place nearby. The app will show you the progress anyway. 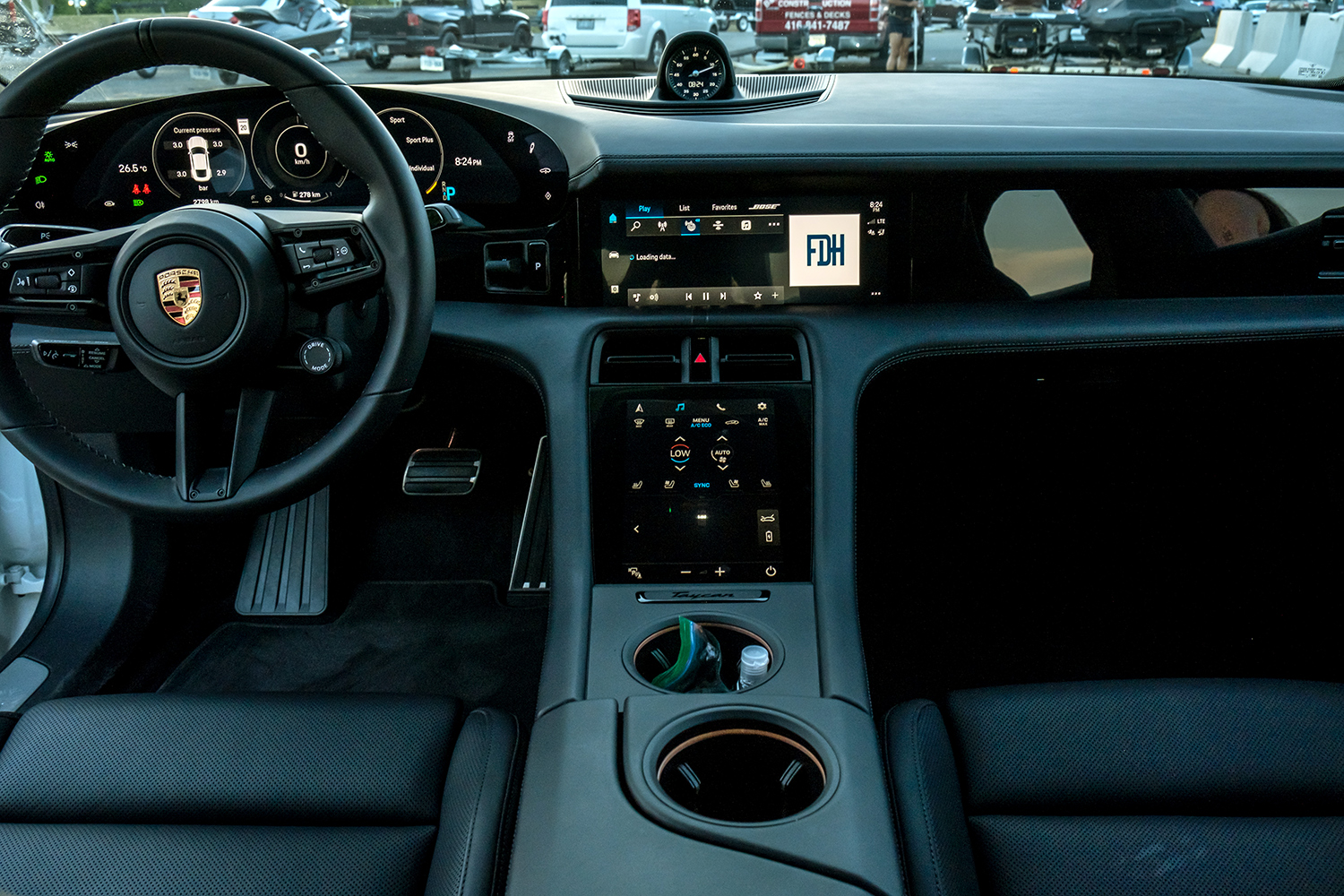 Apple Music is built into the Taycan

It’s Porsche’s first all-electric vehicle, but also an industry-first from an infotainment perspective. The Taycan is the first set of wheels to fully integrate Apple Music into the system. That means you don’t need to play anything through your phone because the streaming service is already in the head unit screen.

It also means it has its own data plan, so for the first three years at least, you can stream from it and not pay a dime for the data. You do have to eventually pay for Apple Music access itself, mind you, though you could get up to six months free. If you’ve never used it, you get a 90-day trial from Apple, followed by a 90-day free period from Porsche. If you’re already a subscriber, you can only get Porsche’s portion. 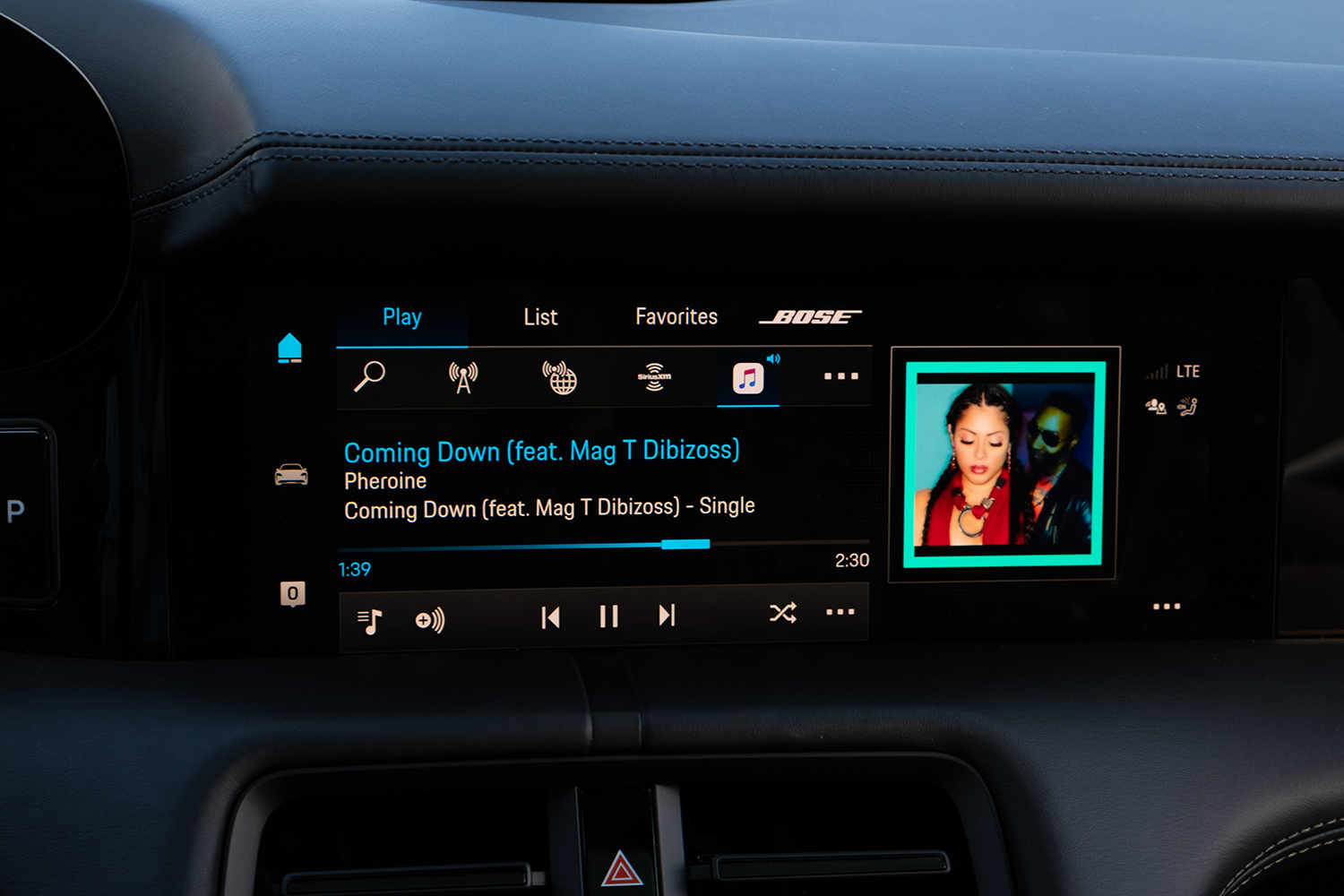 Your Apple ID is tied to a Porsche ID you set up when you first get the car. Once done, your Apple Music account populates in the app onscreen, meaning you get all your favourites, playlists, and even matches for songs you purchased in the past. Porsche did a nice job integrating it with other services, particularly with local and Internet radio. I could listen to a song on either FM/AM or a station in another country and add a song to my favourites on Apple Music.

I listened to music on there for hours without ever touching my phone. And if I did want to use my phone, I could always plug it in and use CarPlay instead, especially for Waze, WhatsApp, Spotify and Downcast. Unfortunately, Porsche doesn’t support Android Auto, so there was no way to get a similar experience using anything other than an iPhone. 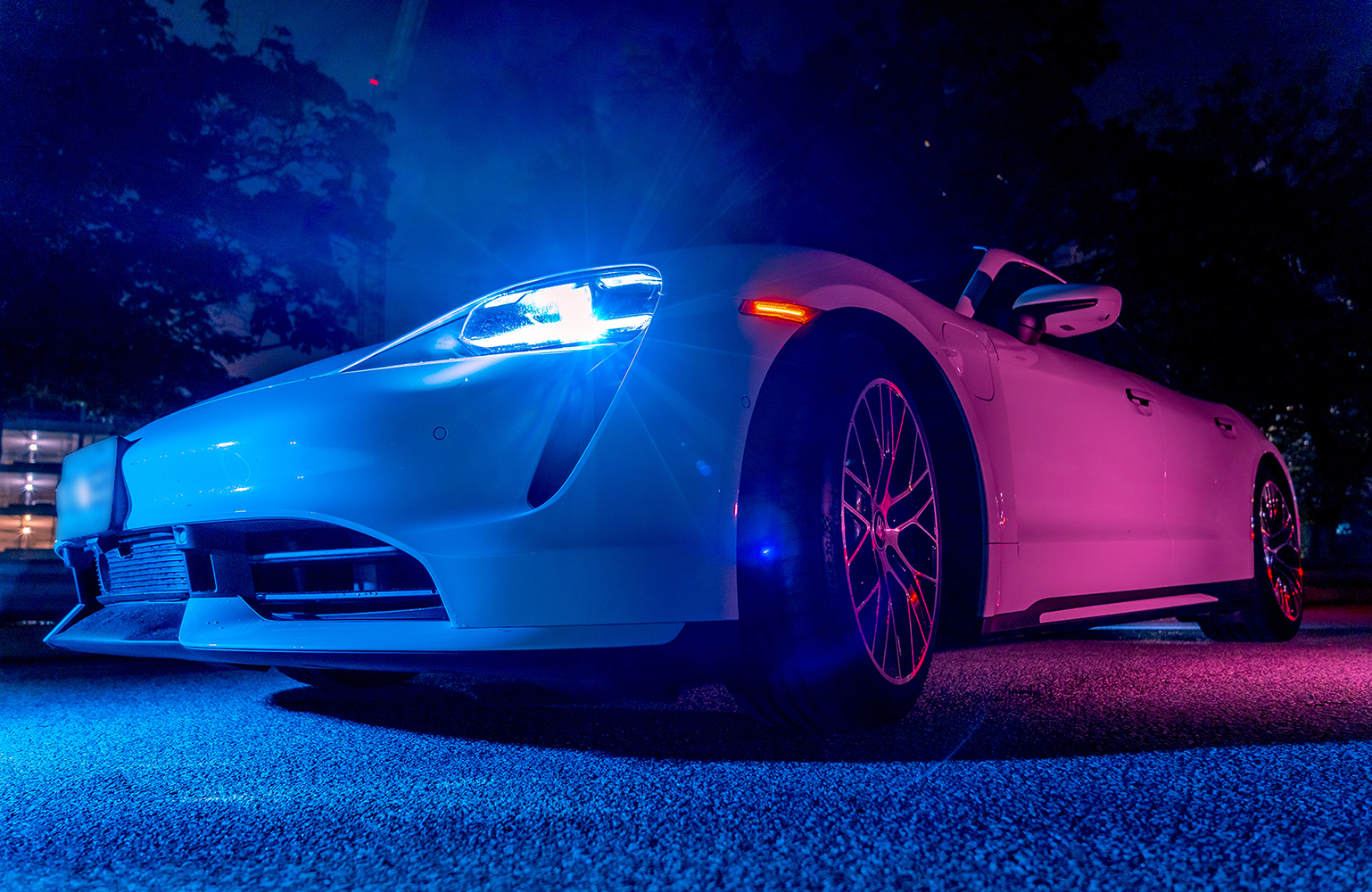 The cabin is dominated by screens. The 10.9-inch main screen also has an option for a second one facing the front passenger. My test drive Turbo didn’t have that, so I don’t know how well it works. There’s a supporting screen under the main one to control climate or act as a trackpad to navigate the main screen’s interface (I found it easier to just tap and swipe). And the 16.8-inch digital cluster screen is also gorgeous, where you know what kind of driving mode you’re in (Sport is awesome).

The best comparison to the Taycan is probably the Tesla Model S, which has a longer range and better access to charging stations, but not all the technical gadgetry inside and out. Porsche is also way more expensive, given the markup you’d expect from a brand like this.

It will come out with a better Taycan sooner than later, but for now, this all-electric beauty portends what the future holds for vehicles that won’t run on gas.