It has been a strange year for Nue.

The Scarborough-born artist first got our attention with his debut mixtape, Iroquois, back in early 2017. The project was primarily produced by his older brother, SAUCEBOY, and showcased a fresh-faced Nue rapping with chilled, leaned-out melodies reminiscent of his time spent in Canada during cold winters. Iroquois attracted the attention of American powerhouse 300 Entertainment and several months later, Nue became the first Canadian to sign with the record label.

Fast forward to 2018 and the young artist was presented with a chance to open on a Canada-wide tour with fellow 300 Ent labelmate and Grammy-nominated hitmaker Fetty Wap. The game-changing opportunity stretched for 18 dates across Canada and culminated in September with the release of his debut studio album, u met me at a strange time, which saw Nue crafting an immersive and futuristic-sounding world of his own over ten tracks produced by some of Canada’s top rising talent including Prezident Jeff, Krinny, Dnny Phntm, ModMaxx, SAUCEBOY (of course) and more.

We caught up with Nue back in Toronto to talk about his project, freestyling, touring with Fetty Wap, his relationship with his brother and more. Read the full interview below. 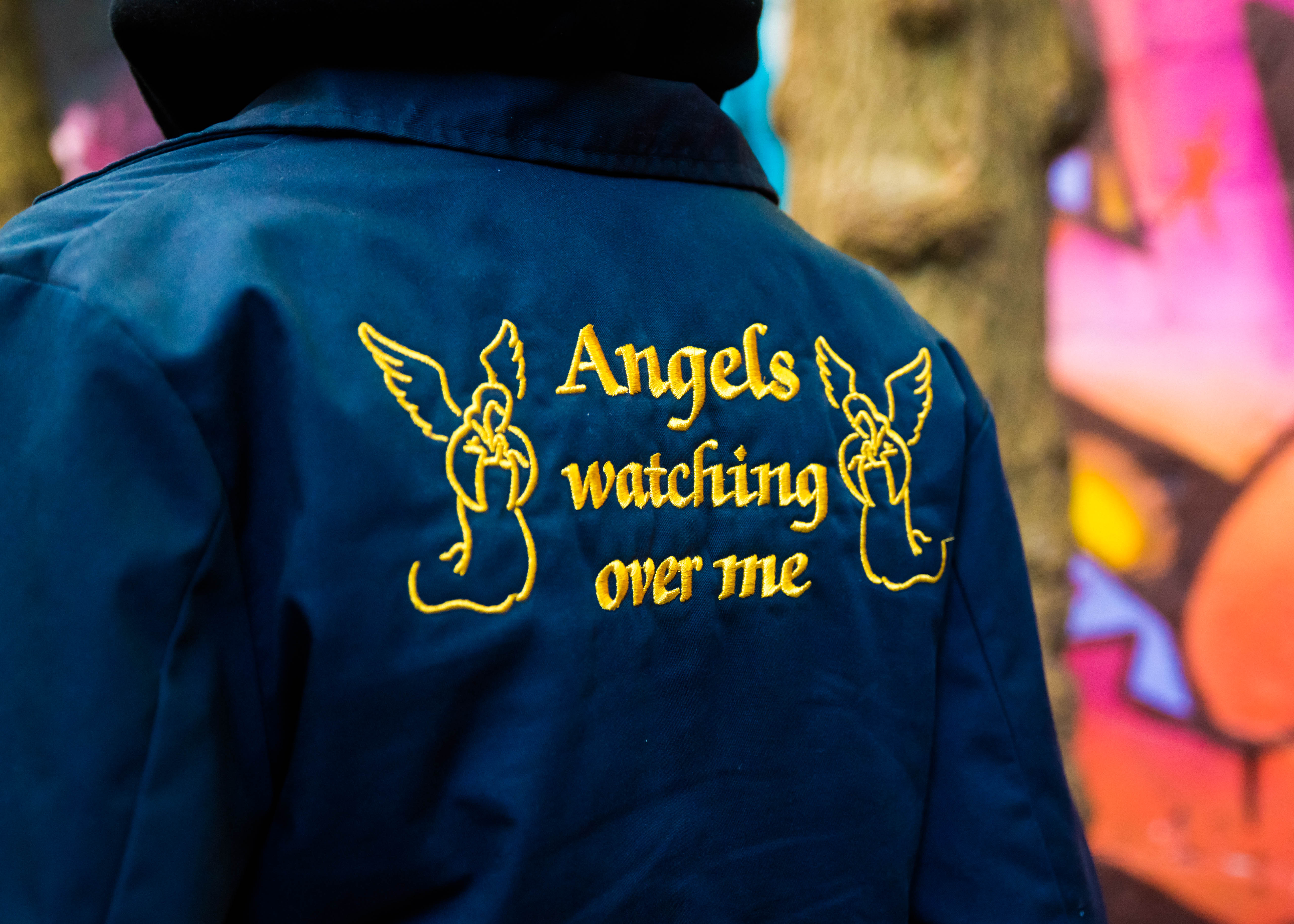 Sidewalk Hustle: When did the concept and name and idea for u met me at a strange time come together?

Nue: I always have two different processes – either I’ll be making a bunch of stuff or I’ll eventually reach a point where I have three or four songs done and I’ll want to just finish it off. I had gotten to that point with this and I remember watching a lot of movies at the time. I wanted this one to have layers. Not just a surface level listening or a generic title. I was watching Fight Club and the ending just felt symbolic to me – new beginnings, new life, starting over. Building and destroying. The past year I’ve gone through a lot of different shit so this project is an introduction for people but, in a literal sense, the title is about me introducing myself to the most people I’ve ever met at the most strange time in my life.

Did you have a specific goal in mind for the project when you got to that point?

I think I wanted it to be about duality and real-life experiences. So many artists come at their music from one perspective but humans have multiple perspectives. Your favourite colour can change from day to day. I want my music to feel real. Like “Night N’ Day” – that record is about a real emotion from a perspective that is not often explored. I’m talking about a girl who’s being selfish and not emotionally there for me. “You don’t give, you just take. That’s why I just throw you away. That’s why I just nut on your face.” That line comes out of nowhere and will rub people a certain way but it’s real. I’m putting out records that reflect my genuine self. I’m a person that likes to turn up but I also like to chill at home and watch movies. Sometimes I want to chill with a bunch of girls and sometimes I want a girlfriend. These are all things that people feel but there isn’t one artist who expresses all of those things. I want to be transparent.

Was it a challenge to get deeper on these records? This is the most personal music I have heard from you.

I don’t really write songs or sit down and write punchlines. If it happens then it happens. I don’t even write music. I didn’t even write this project. The moments were happening in real-time and I was just reacting. Like “in2deep” – that’s another one. “Early in the morning, swear you on my mind…cancel my flight so I can spend some more time.” All of that was real.

I figured that one was too specific to be just a line.

My older brother is pretty much the reason I started rapping and his favourite rapper is Young Jeezy. He would always tell me “Jeezy says shit that you can’t write or think up. You’d literally have to be there.” People fuck with that level of authenticity in music. There’s lots of stuff you can turn up to but the rest of the time people want music they can relate to.

I was actually going to ask you about your brother. I follow him on Instagram and I’ve noticed that his Christian faith is an important part of his life. Is that something you guys have in common?

My whole family is Jamaican and very religious so those values have always been important. I wouldn’t say I’m a religious person but I’m definitely spiritual. I believe in a higher power. Honestly, my brother is the opposite of me. He teaches me a lot. He gives people and things time that I would never consider.

Does that cause you to butt heads and disagree?

Yeah, of course. But that’s how it goes. It’s funny, I had the whole project done about six days before it was due and it had a completely different outro on it. It was supposed to go into mixing and he called me the morning of that day on some “if I don’t get on this album – this, that and the third.” So we did some recording during the mixing session. He brought two beats and the second one was “Neverland.” Something about that day had me feeling a different type of energy and I freestyled the first half of that song in 15 minutes, line by line. It wasn’t even supposed to be the outro but it just stuck. He’s the person I had made music with since the jump but we hadn’t worked since “Nightfall.” It made sense. We ended up having to get the mixing done on the tour. Shoutout to Sunny Diamonds for putting in the slave hours.

Let’s talk a bit about the tour with Fetty Wap. What was the reaction among you and your team when that came across the table?

Oh, I was hyped. We were all hyped – especially because of how it happened. My manager had been in a session with Fetty in New York and played him “Part time lover.” Fetty wanted to get on it but didn’t end up finishing the verse so I didn’t hear anything about it for a month. Then one day he DMd me and asked me to open for him on a Canadian tour.

Is there a city that stood out to you?

I never expected Thunder Bay to be crazy but it was probably in my top three of them all. They came with the energy. Edmonton was lit. I mean, to me it was all lit. I didn’t think there would be people in those cities coming out to see me perform. In every city, there were at least ten people that knew the words to “Nightfall.” I had never been to anywhere else in Canada outside of Toronto and Montreal before the tour. I thought we would hit one or two cities where they would be excited but it’s almost like the smaller places had better shows.

Canada is like that. For some cities, Fetty Wap with Nue might be the only rap show they get all year.

A girl in Thunder Bay said they hadn’t seen a rap show since T.I. came there four or five years ago. She was blown away. I live in a big city so it’s easy to pick and choose. And honestly, I had only done two or three shows before the tour. The fact that there were people who came specifically for me had me going crazy every night. I lost my voice twice.

What was it like being able to see an artist like Fetty perform on those stages every night?

It was amazing. After the first couple of shows – I think maybe in Calgary – he shouted me out. And then he started bringing me out during his set to stand on stage while he performed. He was, like, introducing me to the crowd.

That is amazing that he was forming that bridge for you.

Yeah man. I think we get along so well because he cares about music in the same genuine way that I do. He just always wants to hit the studio and shit. He appreciated my music and the performances. And it was his first time touring Canada so it became a really cool experience for both of us.

Did you learn anything from him?

Yeah, definitely. He brought me under his wing a bit. Taught me a lot about touring and how to move. We’re going to have some music coming out too.

Is there anything you missed about home while you were out on the road?

I’m not even going to front. Other than my mom, I didn’t miss anything. This is what I want to do. I loved being on the road. Who wouldn’t want to perform in front of a crowd every night? I would do it over again tomorrow. This is all I’ve ever wanted.