20 Minutes with HUSH. and Hudson Alexander

The Toronto-based rapper/producer duo (HUSH. the rapper and Alexander the producer) were introduced to each other through fellow artist Teddybear shortly after the release of Alexander’s 2017 dance EP We’re Gonna Have a Party. Anxious to create something new, Alexander and new collaborator HUSH. (a brand new artist at the time) began to experiment with forward-thinking emo rap sounds inspired by the likes of GOTHBOICLIQUE. Before they knew it they had created half of their debut project, You’re Just Miserable, and knew they had to keep going.

The eight-track project was exclusively produced (and mixed and mastered) by Alexander and features a number of guest appearances from close collaborators of the duo including smrtdeath, Teddybear, Boy Pape (previously known as Brick) and Lofsky. Despite the title suggesting a miserable experience, the album is upbeat and melodic throughout and offers several highlights in tracks like “Candy Color,” “D.O.A.,” “MADtv” and the project’s opener, “Stiles.” Do yourself a favour and listen to the whole thing, it comes in at just under 30 minutes. 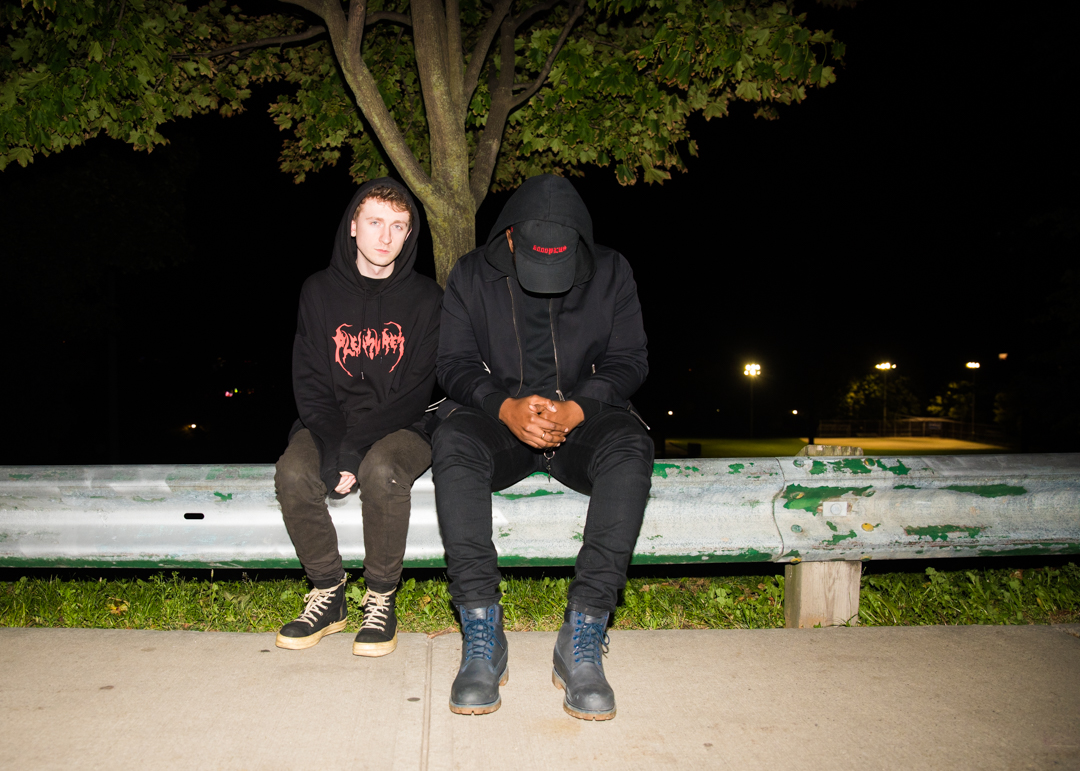 We sat down with the duo at the studio where they recorded You’re Just Miserable and they offered us a look into the origins of the album, their musical relationship, the distinct album art and more.

Listen to the album below and read our full conversation with HUSH. and Hudson Alexander.

Sidewalk Hustle: Where are you each from? And how did your relationship with music begin?

HUSH: South American, Guyana and Brazil. Moved to New York when I was 15. And then moved here (Toronto) when I was 18. Been here since. Music has been around though, I was in band in high school and then I started making beats.

Hudson Alexander: Wait, really? I didn’t know that. What did you play?

Hudson: Oh, I thought you meant you played IN a band.

HUSH: I did that too. It was a pretty shitty metalcore band. I played trumpet in high school and then guitar in that band. I started making beats with FL when I was 17 or 18 and only started recording last year.

SH: Tell me about the Guyana/Brazil part.

HUSH: I was here from 2003-2007 with my mom. Due to her work, we had to relocate so she took me to live with my grandmother in Guyana. I finished high school there early and then decided to go over to Brazil for awhile. It was pretty cool. I got into the band stuff over there – the rock scene there is kind of interesting. They merge a lot of heavy metal with Latino sounds – it’s hard to describe.

What about you, Hudson?

Hudson: I’m from Winnipeg. I grew up there – oh, and I lived in Egypt for a little bit when I was 15 or 16. I’ve been doing music my whole life. I wanted to be a singer when I was super young after my dad got me into a bunch of rock bands and singer/songwriter type music. I had really horrible pitch so my singing coach told me to go take piano lessons and learn how music works before I could become a singer. So I took piano for a really long time and then moved on to guitar because my dad played guitar. I did a bunch of emo and alternative bands throughout high school until I moved to Toronto in 2014. I was already experimenting with electronic music on my own in Winnipeg. That started because I was writing songs for the bands I was in and I was trying to do everything on my own at home. I would bring full songs to them with everything TAB’d out in Guitar Pro 5 or whatever. I’d had the drum track and bass and everything.

Hudson: Yeah, basically. Just with MIDI guitars and drums. But that worked super well for my high school bands because they were weird alternative rock and emo stuff. I got along really well with the singer in my second band so he was able to sing my lyrics and come up with additions. But then that band ended and instead of bringing them the songs, I started making songs with synths and drum machines. That’s how I got into electronic music. The singer in the new band I had joined at the time was doing a lot more writing and in a different style. It was laid-back prairie rock stuff which was fun but not the kind of stuff I was writing. So I started spending a lot more time producing my own music and every time I found a new genre I would just mess around. I ended up doing dance music, weird electronica stuff, “real” hip hop and now I’m just messing around with more modern rap sounds. 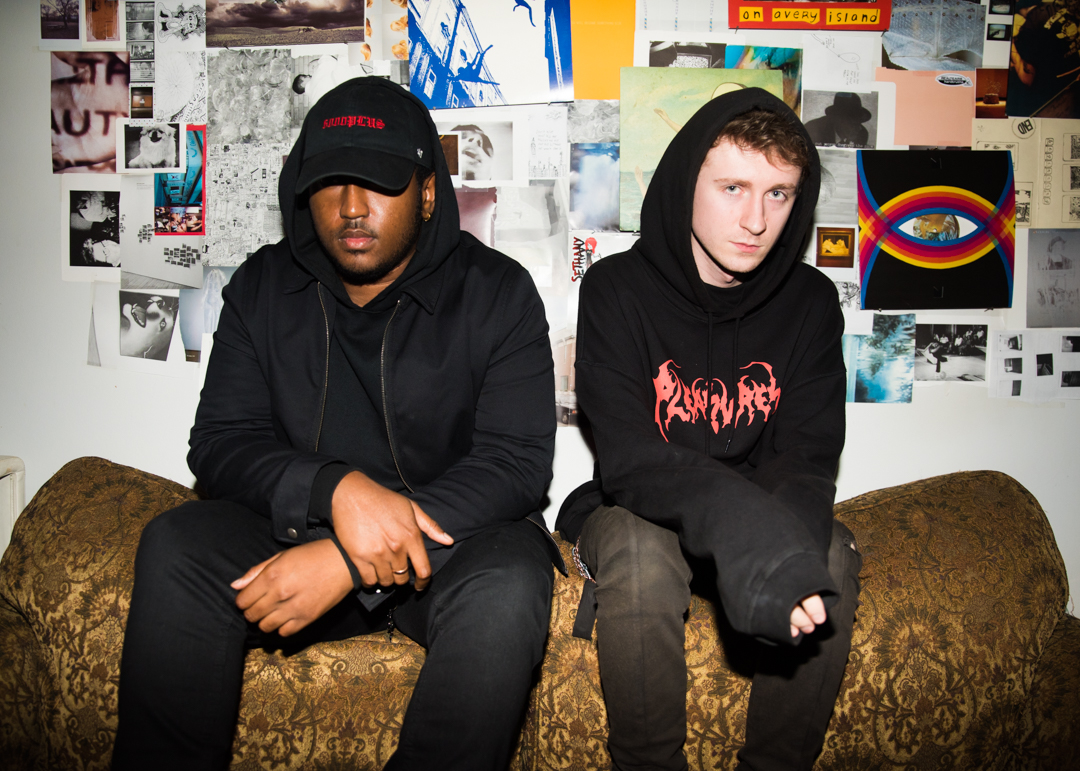 SH: How did you guys meet?

HUSH: We met through Teddy [teddybear]. It was random. I pulled up to Hudson’s house super early in the morning. I was super gone off of no sleep. He was recording with smrtdeath and my dumb ass walked in and ruined a recording. Then we became best friends.

SH: Had you made any music before meeting Hudson?

HUSH: Yeah, I’d recorded two songs by myself. Shoutout Lux who engineered those. Other than that, I was just making beats and trying to work on other peoples’ music. This was about a year ago.

Hudson: It was right around the time I had started doing more rap beats and I was looking for vocalists. It came about pretty naturally. I didn’t really know a lot of rappers or singers that I liked so I was focused on my own music. I had just finished my dance EP that was coming out. I met Teddy through another friend, we made a song called “Show and Tell” that I thought was super cool and we kept working and making music. At some point he said “you need to meet HUSH.” and this time last year we were making a lot of songs and messing around.

SH: When did you know it was starting to work?

Hudson: “Candy Color” was the first song we made from the project. I really liked the sound and wanted to develop it more. We saw potential there so we continued down that road. I would say we made it about three-quarters of the way through the process and then realized we could make a really cool project.

SH: You were already making it.

Hudson: Yeah, that’s why three songs came out before the project did. We didn’t even realize we were making an album.

HUSH: We started working on shit and we were knocking them out so fast. We had to just keep it going. The chemistry was just so good.

Hudson: The reason it happened naturally is that we were both making transitions when we met. We were both just really excited to be working on something new. I would think a beat is trash and he would approach it entirely differently and change my perspective. I’m really focused on aesthetics and style. I’m passionate about blending styles when I work with other people. I can be super pushy but it’s for the sake of actually pushing people as artists and bringing out what I see in them. It can get hectic. 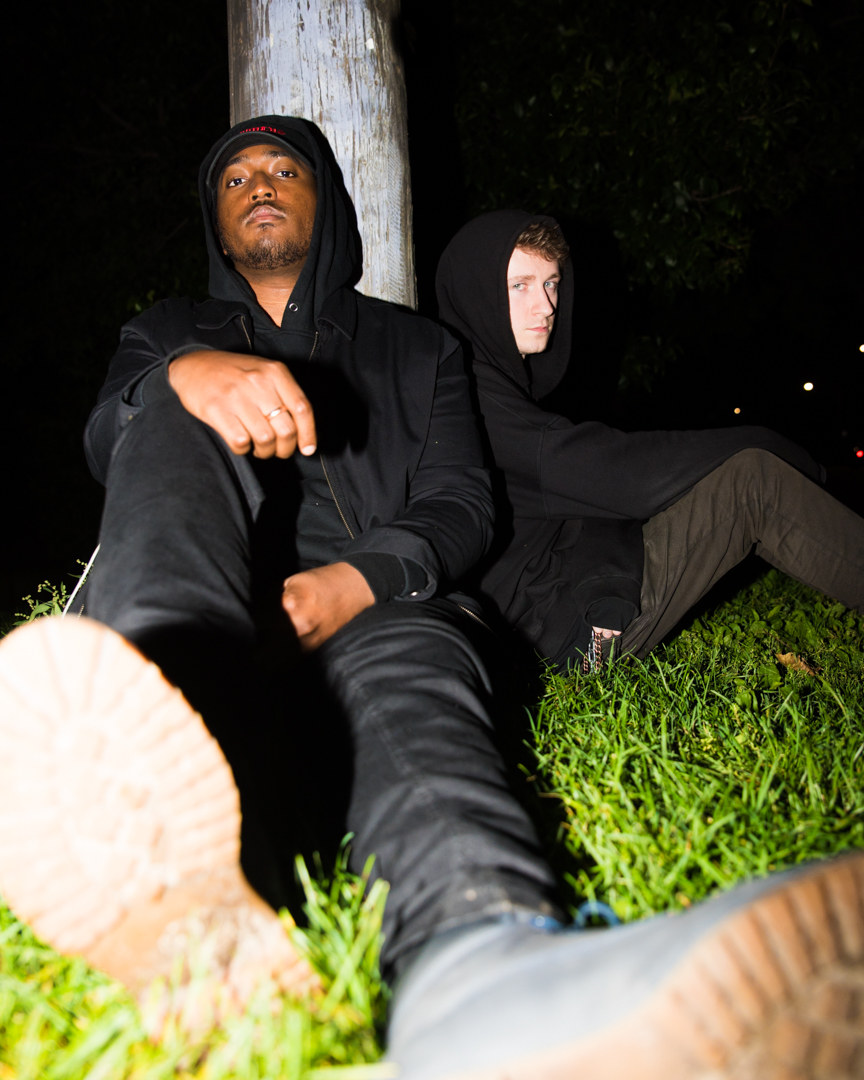 SH: Where did the title of the project come from?

HUSH: The concept of the project is finding a relatable struggle beyond emotional and physical struggles – just something that everybody experiences. The song “DOA” is about someone with way too much pride. And they’re learning that their pride is putting them on their ass. And each song has a theme. I realized that it was describing someone who had to deal with the repercussions of their actions. And it brought up feelings of misery.

Hudson: HUSH. came up with it. To me, it’s a self-reflective album but it’s obviously open to interpretation. “Uninvited” is a fucking action movie about a home invasion. There are a lot of different perspectives on this project. I like the name because it speaks to how vaguely conceptual the album is. It’s always been important to me to do things like that.

SH: I want to hear about the cover art. You designed it yourself, right?

HUSH: Yeah. I designed it with an artist named That Girl. He’s a Belgian artist who does realistic paintings with anime eyes. He’s super dope. The concept for the album cover came from a conversation about the album name. He said something like “when people are miserable they usually want to be someone else or something they’re not.” The cat on the front is holding a decapitated head. You can see some frustration in the cat’s eyes and that’s representing the hiding of feelings.

Hudson: HUSH does the best art. I try to get him to do all of my art. I think he’s the coolest graphic designer I know.

HUSH: I like working with one aesthetic when I make art. I want it to be noticeable. I think my favourite artist is George Condo, the guy who did My Beautiful Dark Twisted Fantasy. His shit is so manic but you always know it’s him.