BAD CHILD is an open book.

The 21-year old singer/songwriter and multi-instrumentalist was born Isaiah Steinberg in Kitchener, ON. The son of a classical guitarist, Steinberg was immersed in music at a young age and began producing shortly after he turned nine years old. Music was initially a hobby for the artist as he grew into a teenager but a breakup (and falling out with a previous passion for photojournalism) put his core love for songwriting into the driver’s seat. He uploaded his first song online and everything changed. Suddenly, his email inbox was starting to fill up with messages from major labels across the world.

It was not long after that Steinberg informed his father he was packing his things and moving to Toronto with nothing but the dream of becoming a musician. He arrived in Toronto during the summer of 2016 and began renting a rehearsal space as a makeshift home. The space (or “box” as he refers to it) was a one-room studio with a bathroom and one window. But it was all Steinberg needed. By the end of 2017, the young artist was discussing a deal with multiple labels across the world to release his debut project as BAD CHILD.

We met the 21-year old singer at a bar called Betty’s on King Street East in Toronto to drink beer and discuss music, his name, getting emails from record labels, his upcoming project FREE TRIAL, his love for Nine Inch Nails (and Sean Paul) and much more. Read the full interview below.

Sidewalk Hustle: When did music become a part of your life?

BAD CHILD: Music has always been a part of my life. Art and the means of creating in general has always been how I explained myself. I’ve always found it easier to show someone than to talk about something. My dad’s a classical guitarist – it’s always been a part of my life. Three years ago, I started making music and I got kind of a break. The first song I put out – it did some numbers. A couple days later I had an email from all these labels. All these messages started pouring in. So I moved to Toronto. I lived down the street on Front, right over there [he motions to the south]. I lived in this rehearsal space – it’s a box. It’s literally a box with a bathroom. One room. The one wall was a window.

Front and Sherbourne. Right over there. Anytime I’d have money I’d come over here and buy a drink. I’d take all my meetings here and do most of my things here. It’s not really a nice place. When the winter came I had to get a space heater. There was no stove. Literally a box. I’d just make music all day.

Where did you grow up?

Kitchener, Ontario. I spent a bit of time at Toronto Sick Kids when I was younger but I wasn’t really versed in culture when I moved here. I didn’t know anybody. When I came here I just made music all day. I would make up, get coffee and make music. But while I was at the coffee shop I would be drawing or writing. A lot of my stuff, especially my lyrics, comes from drawing an image. 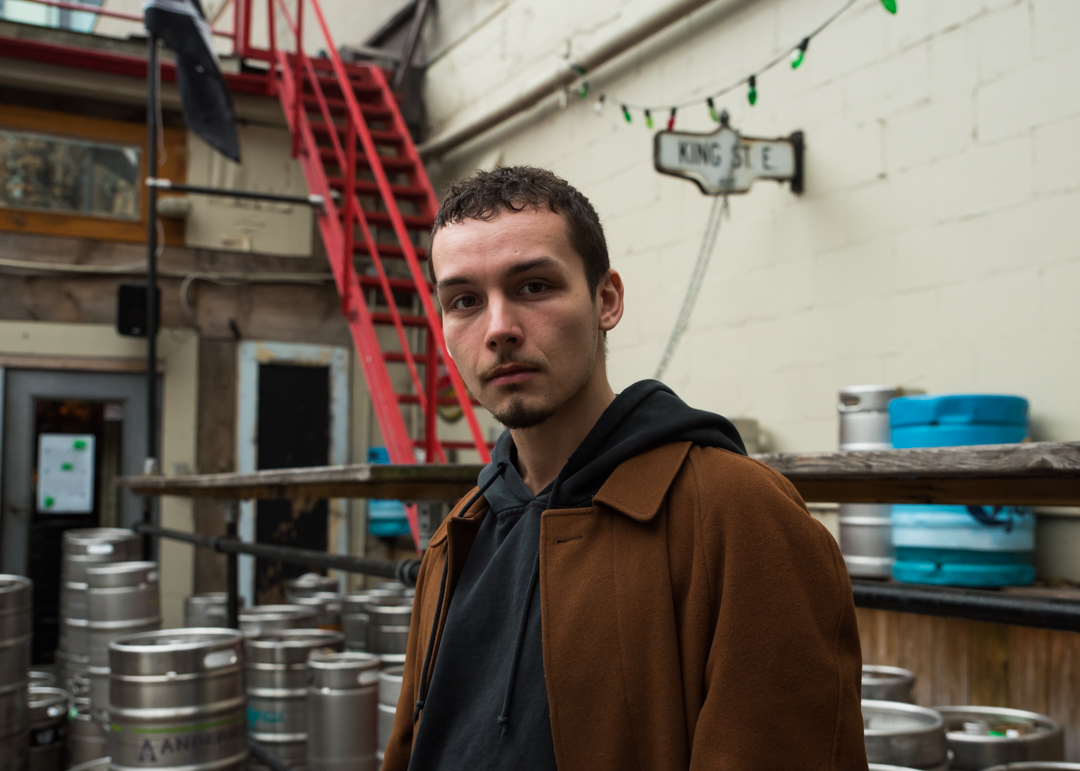 Do you like your music when you are making it? There’s an artist here named Sean Leon who describes releasing his work as “killing” it or “killing a piece of him.” Not to say that he doesn’t like it but it’s like shedding a piece of him.

Dude, his album is so good. I need to listen to it more. Sometimes I worry that my music is too personal and hard for people to listen to. I think of it like picking a scab sometimes. Writing can be the hardest part. I produce all my stuff myself so I usually start with the instrumentation first. Dreaming on top of it is the difficult part. But once it’s off, it’s off.

Do you ever write first?

Yeah, sometimes I write poems and lyrics. But telling the message in a way that the beat is speaking too is important to me. So much of the music that I’m releasing in the future has production that speaks alongside the music. I like to hide things.

Yeah, within the context of the song it doesn’t make sense. Only someone who really knows would recognize what I’m hiding.

Where do you think you got that from? Are there musicians that do that in their music that inspire you?

I think the most interesting thing is when you take genres like that – like, how can I take a song like Nine Inch Nails’ and combine it with a song like Sean Paul’s. I love comparing genres. Even though the word “genre” is fucking stupid. The whole idea of “you’re a rock band” is so stupid. Just make whatever music you want to make.

How would you describe your music?

When you’re watching television, it’s like the feeling of a commercial switching to another commercial. I love that feeling of an advertisement being thrown at you. I always think of my production like that. I want to make someone feel like they’re being overwhelmed with things.

You only have so much time to impress people.

Every song on my new record is under five minutes. I learned that from The Beatles. A lot of their music is short and doesn’t take a long time to get to the point. I think it’s about asking “how can you deliver the message to somebody?” Marshall McLuhan talked about “medium is the message” and how good graphic design is about less room between the idea and the consumer. Most of my songs become super long when I write them. The last few songs I worked on have over 100 stems. So at some point I just cut it all back. 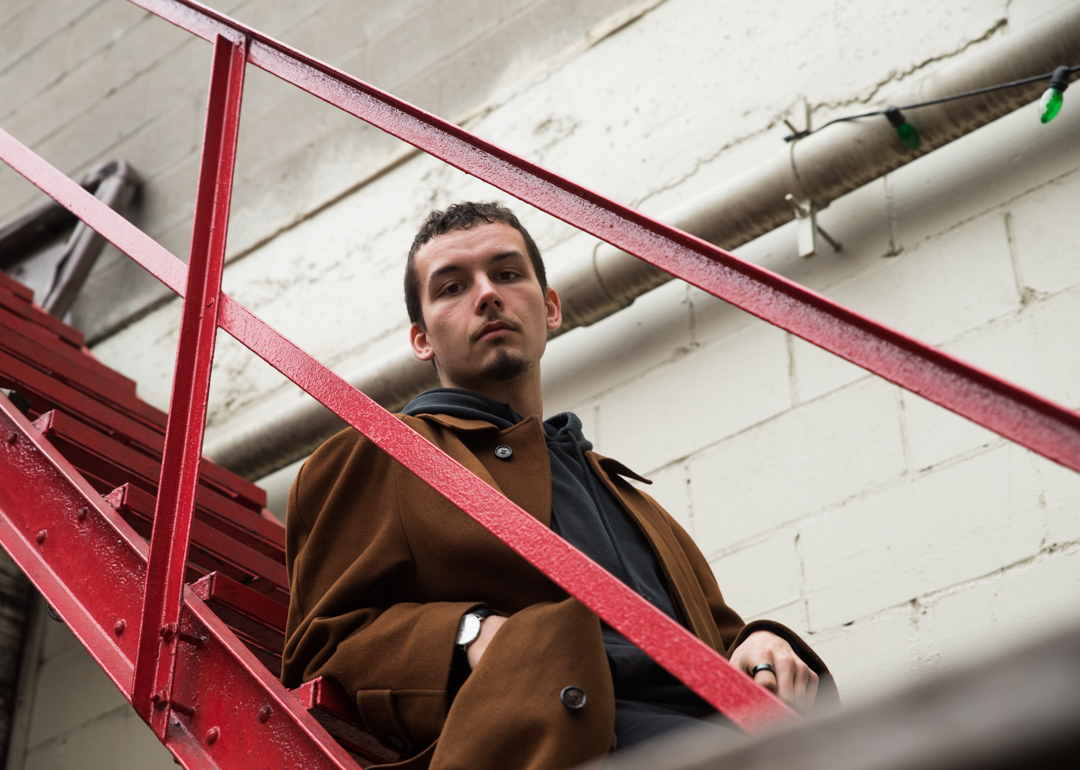 Where did the name BAD CHILD come from? It’s also the name of your debut single.

That song is about being a better person. It’s a sarcastic title. I’m a “bad” child. I’m trying to ask myself “how can I become a better person?” It’s also the first song on the record. It’s the beginning of the story. I used to go by my name Isaiah Steinberg and that’s just not a stage name. BAD CHILD made more sense.

What keeps you making music?

I like to think about the origin of music. You can’t say that humans need music for life but it goes back so far. Being able to look at it like a history of emotion, I look at my music like an epitaph to a certain emotion. I have to make the music in order to not go nuts. I have to listen to my own music too. It’s funny – I’ll make something, listen to it 200 times and I have to ask myself “is this me?” If it’s something deep inside of me that I need to get out then I usually know it’s right. Beyond that, it’s just important. It’s important to be able to get out what you need to get out.

Maybe it helps and it hurts.

Yeah. At first you may look at something you’ve created and hate it but six months later your perspective on it could be much different. And you’ll be glad you did it.

Have you shown your dad your music?

Yeah! I think he’s impressed. I hope. I don’t know. My dad’s a pretty stern dude – he’s the smartest guy I’ve ever met and when it came to this stuff and moving to Toronto, he told me he believed in me. That was scarier than being told no. I had nothing to eat, no source of income, no plan other than to make music. But I remember the first time I showed him my record deal. That was a pretty emotional experience for me.

Tell me about the new song, “Payback.”

Was that a hard one to record? It sounds like it.

Yeah. It’s funny, I take a lot of the things I’ve done in my life and things that have happened in my life and combine it all into one perspective. It’s not just about what happened to me, it’s about what I did too. So much music is one-dimensional and one-sided. Let’s be real for once. We all fuck up. That’s why this one was important. It’s also the last song on the project. It’s like a purge.