In-your-face Edinburgh experimental soul-punk pop act Young Fathers jumped grabbed our attention when they took the Mercury Prize in 2014 for their acclaimed debut album Dead. Made up of ‘G’ Hastings, Alloysious Massaquoi and Kayus Bankole, the trio who first met as young teens have since released their punishingly slick sophomore album White Men Are Black Men Too and have been touring like crazy. Recently, they released their incredible Massive Attack collaboration “Voodoo in My Blood” and if you haven’t seen the video featuring Rosamund Pike yet watch it now – it’s a must see. Not long ago, Young Fathers stopped by Toronto’s Horseshoe Tavern and we caught up with Alloysious Massaquoi to talk about conquering gatekeepers and being yourself. Check out our interview and photos below. 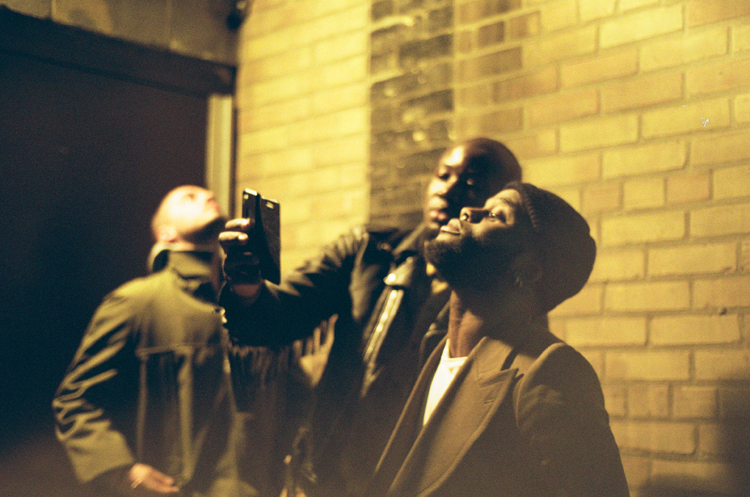 Alloysious Massaquoi: What’s your definition of a big fish?

SH: You’re playing these big festivals, you’ve got the Mercury Prize under your belt, you sell out shows and you have a level of notoriety, but at the same time you’re not on the radio. Do you feel like you’ve “made it” or are you still climbing?

AM: It’s still a progression really. I don’t think a creative person is ever satisfied. I don’t think “Yeah, alright I’m here now!” You build on things and hopefully the following gets better and more people come to see you. That means your music has come across to a wider range of people, and ultimately that’s what you want.

SH: But you’re still doing well! Have you had any moments of “we’ve made it”?

AM: Nah nah nah! It’s one of those things, you’d rather a sold out show than 10 people but if there’s 10 people then you try play the best show that you could. It’s either or, it’s just better when there’s more people cus then that means people can have some sort of experience and it’s all word of mouth that travels. 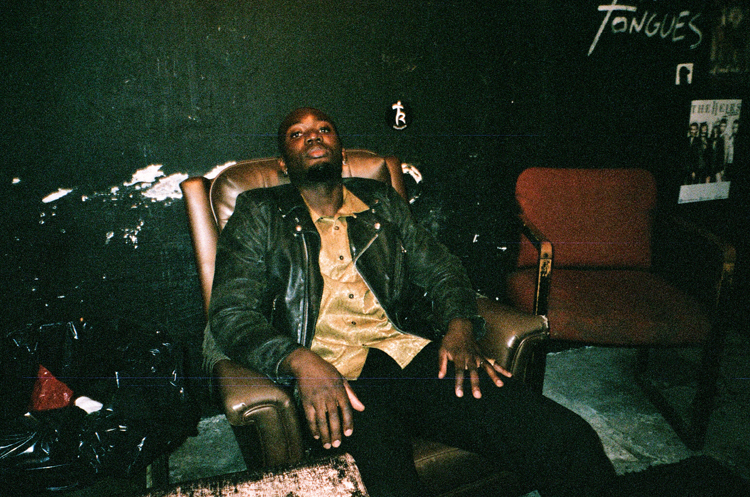 SH: What do you think people are not paying enough attention to?

AM: Our music. *laughs* There’s a lot of pause as to what goes on radio and who runs radio and what gets played at certain times and what doesn’t, so you’re up against that. So long as we’re staying creative and trying to kick down those doors or barriers or whatever, as long as we stay true to ourselves and be creative I think eventually something will happen. And if not? We’re happy doing what we’re doing and what we love.

SH: Do you think that there’s less traditional gatekeepers now what with the internet, social media and these new tools?

AM: Nah I still think it’s the same. It’s a misconception. You think because there’s more it’s easier to get things out, but there’s still these gatekeepers around and if you wanna make it in music you need to be seen and you need to be heard. TV and radio are still king and will forever be king, so you’re up against it. Certain stations won’t play you because of certain lyrics or it’s deemed “too smart” or “too knowledgeable.” You’ve got major labels having a shit ton of money that can pay the radio programmers to get their artists on and ensure it’s a hit record.

SH: So how do you demolish those gatekeepers?

AM:  There’s not a set way. You stay true to yourself and keep being creative and then eventually you hope one of them will be like “Oh! We’ve known about these guys for a while. Are they good?” Or someone just gives it a chance. I don’t know.

SH: How do you deal with the “gatekeepers” in your day-to-day life? People or things, human or otherwise, that get in the way, get you down or defer you from your path?

AM: We’ve always talked about it since we started the music, there’s always going to be obstacles all the time. I guess it’s just trying to find some sort loophole around it or try and fit whatever you want into the space you’ve been given, and sometimes it’s a good thing. You’d obviously prefer if you had a choice but the choice that you do have is what you manage to put in that space. 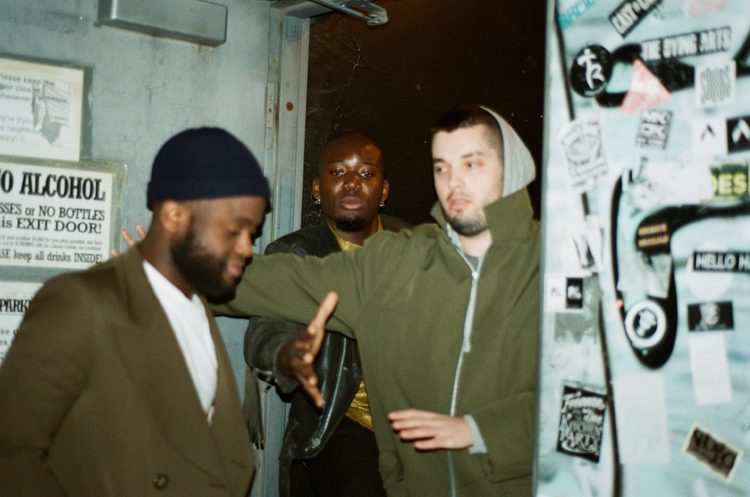 SH: Do you get discouraged?

AM: Of course you get discouraged! That’s the standard. You’re coming up with all these songs that are potential hit songs and they’re not getting played and they’re not getting the love you feel they deserve. There’s only so much a person can do without getting pissed off or getting annoyed. It’s more a frustration than anything, but it’s just what happens really, like working at a job that you don’t really be at but you gotta pay the rent. Everyone has to go through that procedure and it kinda like a right of passage. It is what it is really.

SH: Any advice for getting over that hump?

AM: Just embrace it. If you’re upset or you’re angry, whatever it is that’s wrong, embrace that pain. Then you move on. Don’t try and bottle it up. You feel what you feel and then you try and go through that procedure where you try and think “okay, at least I’ve still got my life…” things like that. First and foremost though, embrace whatever emotion you’re feeling and then it’s easier to pass through. 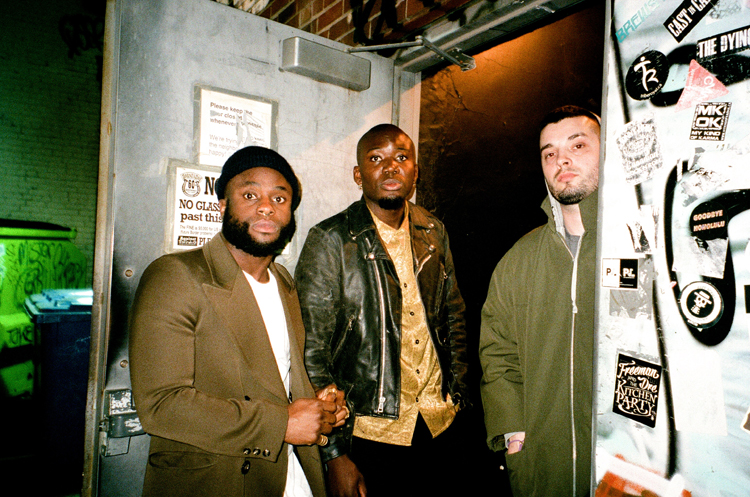 SH: What pisses you off?

AM: A lot of things! *laughs* Just a lot of thing can piss a person off. Everybody’s different, everybody has their quirks, everybody gets annoyed at each other, certain silly things or big things. There’s no right or wrong way.

SH: What excites you?

AM: A lot of things! Right now I’m excited for this show, it’s sold out so it’s gonna be busy, and hopefully we put on a good show.

SH: Would you say you’re someone who lives in the moment?

AM: Yeah… I’ve been back and forth about that. *laughs* I never did before and then I did, but I think my nature is to live in the moment. That’s just the kind of person I am. I lost it a bit for a while but I’m back on it. It feels good to have the spring back in my step, you know?


SH: Yes, and it keeps you from getting caught up in the small things. Is there anything you’re particularly hyped about?

AM: There’s a lot of things that get hyped and you hear and you go “Right… I don’t know why that’s getting hyped…” but that’s just the world and how it works. I think what doesn’t get hyped and should get hyped is the fact that everybody is multifaceted. People aren’t one-dimensional or two-dimensional. There’s so many layers to everybody. The person you are now in this interview is going to be different when you go home are see your parents, or when you hang out with your friends, or when you’re in a job. It’s not widely accepted that that’s how human nature is. People just don’t understand human nature. There’s so many, again, quirks and little ticks people have and I think that should be celebrated… If that’s put out into the masses thrn it makes it easier for people to see that it is normal.

SH: We’re all people and we all go through shit. 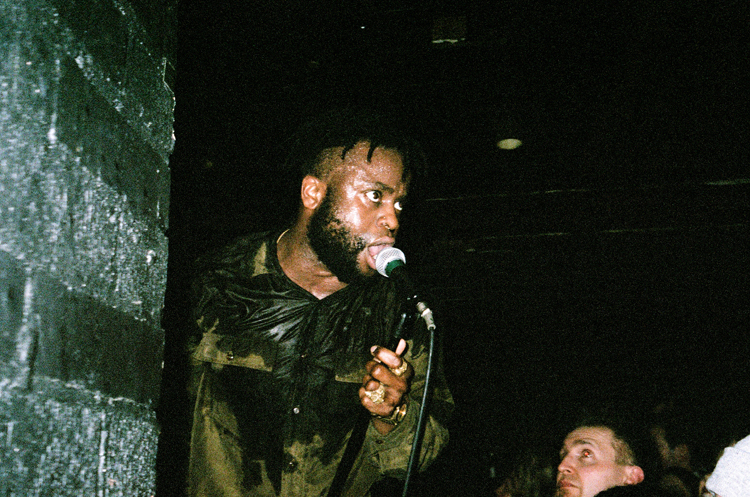 SH: The three of you have been friends for a long time and you’ve been making music together for a long time. It’s been over ten years right? You met when you were quite young?

AM: Yeah we were fourteen.

AM: It’s a mixture. It’s that fourteen-year-old enthusiasm when we get on stage and I think that’s coupled with having experienced a lot of stuff together, good times and bad times, with the need to be expressive and embrace our differences. When we’re on stage we don’t really think about it. You put in your ten-thousand hours that’ve been cultivated over five years and you go on stage and you’re just reacting. You’re being spontaneous and you can just do what you want. I think that’s the level of creativity that everybody wants to get to, whether it be in art, sports, whatever – just not thinking. Just doing. You’re in the moment. Sometimes you can catch that and sometimes you can’t. Even sometimes when you don’t, I think you still have a good show because you’re so frustrated and you’re that open because you’re putting your heart and soul out there. You’re being exposed.

SH: Do you guys still surprise each other even though you’ve known each other and worked together for so long?

AM: Yeah you’ve got to. I think it comes across on stage when someone does something and I’m like “Whoa!” but then the reaction is to go along with it and everyone bounces off each other. I think that’s what makes it exciting and what keeps us motivated, happy and doing what we’re doing.

SH: There must be quite a level of trust.

AM: Of course! We’ve known each other so long it’s like a family of brothers. Young Fathers is the baby and you need to nurture it and feed it and give it water. There’s gonna be arguments or whatever but in the end it doesn’t really matter. You have to stay focused.

SH: What are you listening to right now? Anything you wanna shout out?

AM: I’ve been listening to quite a lot of Afrobeats to be honest, get my mind away. There’s A. CHAL, that’s the last person I listened to. Composer Julius Eastman. Iranian psychedelic artist Kourosh Yaghmaei. Also the support for our tour HXLT, check it out.

SH: And if you’re scared to be you?

AM: I think everybody has been scared to be themselves. Some people are fortunate and come from a background where all you can do is be yourself and be resilient, but if you’re scared to be you just know that everyone is probably scared and you’re not the only one. 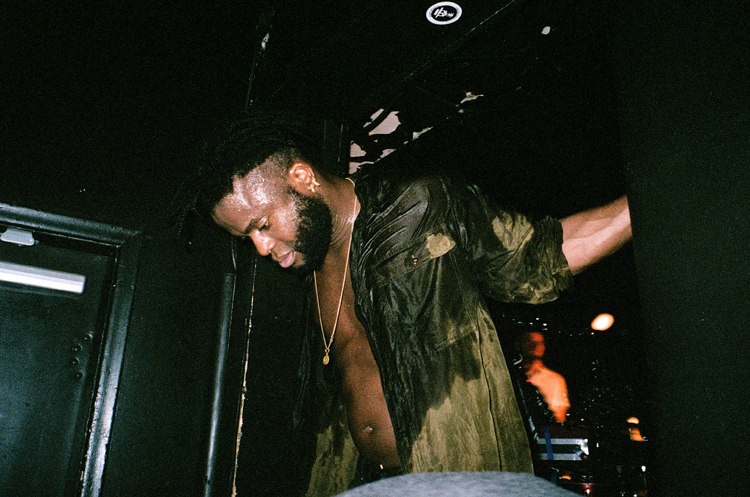 White Men Are Black Men Too is out now on Big Dada. Download a copy via iTunes here. You can also catch them live at the dates below.