15 Minutes with Wild Beasts in Brooklyn

On an incredibly muggy night in NYC, we ventured to Baby’s All Right in Williamsburg to chat with UK indie rockers Wild Beasts before they played a one-off show in honor of their recently released fifth album Boy King. As we’ve previously written, the quartet are more confident on this record, maybe a little arrogant, definitely sexual, and seem to be having a lot of fun. If you’ve been a fan of theirs since their eponymous 2004 EP and debut LP Limbo, Panto, you will have noticed this isn’t the same Wild Beasts.

Known for eschewing lad culture, writing with a candor you don’t often get from rock bands, they’re expressing the aggressive, stereotypically masculine side of their natures now.

Read our interview below and view the gallery. 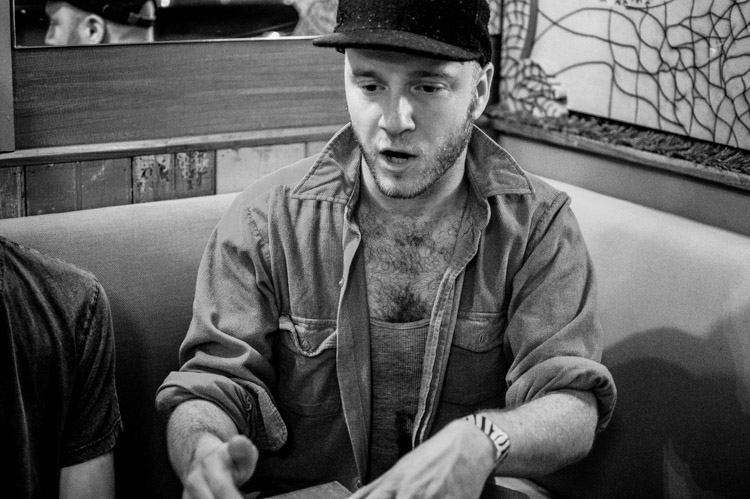 Hayden Thorpe: Album five! It was made in America in Dallas, TX. We wrote it throughout 2015 and made it in the space of about 2-3 weeks in a bout of frenzy with John Congleton of St. Vincent and David Byrne fame. It’s kind of a lot more aggressive, sleazy, trashy, disgusting than our previous work.

Tom Fleming: We’re having fun. In some ways, it’s quite a dark album, it’s quite a cool record. It’s a rock record, do you know what I mean? We’re kind of shouting at the void. Rather different to our last records, which were much more considerate. This was much more in the moment.

SH: You mentioned John Congleton. You said he made you braver and bolder. Did you feel you had to be brave? Was there hesitation approaching it?

HT:: It comes down to responsibility, as a creative. As people who get paid to create. With that comes the territory of risking humiliation. It’s like pulling off a stunt. The closer you come to disaster, the more spectacular the work. There’s a sense of taboo about the record. A sense of arrogance and ego, although that comes with the territory, it isn’t something we’ve flirted with before. After making five albums, we couldn’t make a record that took us to suburbia in a nice backyard for the kids to run around in. We wanted to make something that still had vital signs.

SH: There seems to be some misinterpretation about the arrogance, as you said, on this album. If Pitchfork is to be believed…

TF: If I may, in that review, I think a sense of irony and self-loathing was missed, if you know what I mean? In this record, we’re addressing the nastier sides of ourselves and of people. Of what it means to perform the role of the male. It’s a record that’s about the doubt of yourself. You wrap yourself in so much confidence and you hope nobody notices how thin the layer is. That’s what we’re getting at. 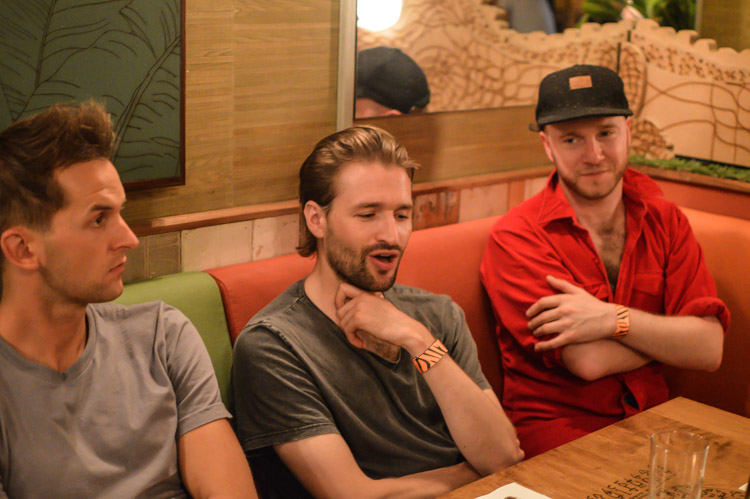 SH: How long did it take to put this together and to decide to go in this route?

Ben Little: A long time. We were in a rehearsal room in London for the better part of a year. Then we went out to Dallas with John for a month, recorded and mixed it. That part was very quick but it took us a long time to get the ideas together. A lot of the songs had different forms and different versions.

SH: We’ve actually never seen you live but we’re told there might be a departure from your usual style. Is that true?

HT: Yeah, I mean, the older songs actually slot in quite nicely with it. They’re of the same family tree. Like a grandchild, not necessarily looking like the grandfather. There are hereditary traits within it, but you kinda lose the big nose. For us, it’s an evolution within the same framework. You can’t reinvent your own heart. The heart of it is the same. It’s similar to any mate’s work. You have to deal with your own heart before you can deal with others. It’s like when a plane is going down and they tell you to put on your own oxygen mask before someone else’s. You make the work to nourish yourself. And then you realize that you’re human and other people probably need the same nourishment. Not always! Not everyone needs the same medication.

SH: Did you think of your audience as you were putting this record together? How they would react to hearing it live.

TF: I think that came afterwards. We didn’t realize this record would be quite divisive. Once we got to rehearsal, we realized we had to do it properly. There has to be no messing around with this. We got new toys as well. New pedals, new guitars so that we could be the part. In that sense, I wish we had [thought about it]. After, we realized what we’d made. The theoretical, more intellectual side of things, we thought about that afterwards. After we’d made it in the heat of Texas. Which I recommend as a strategy. You make good decisions under pressure. 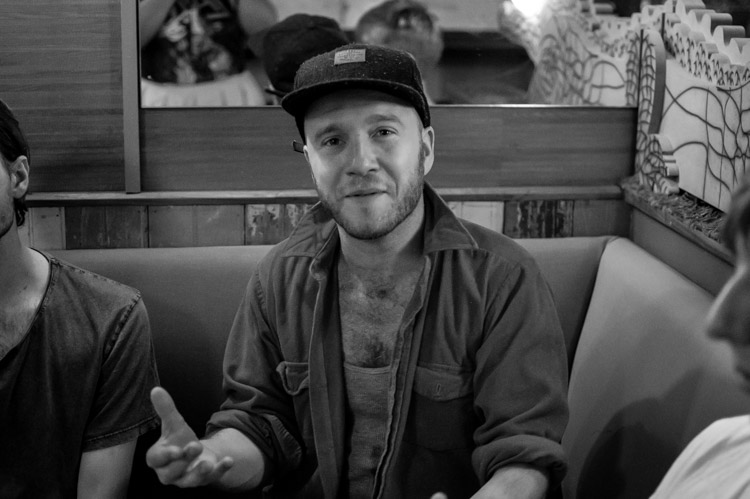 SH: In going into these upcoming performances, do you feel rusty or just excited?

TF: I’m excited! It takes us a few shows to get back to fighting fit. I think we’re very much in it now.

SH: Is there any music you find exciting now or  live performances you were impressed by?

HT: Saw a gig recently in Dallas actually by John Carpenter. The weight and aggression and heaviness of that sound and how he achieved is a lot of the things we’re aspiring to. That sonic palette. It was pretty incredible.

SH: What’s your favorite city to tour in the U.S.?

HT: *Pointing at our Zayn t-shirt* I can’t get over how great that t-shirt is.

HT: Is that official merch?

SH: It is official merch! We don’t know how they pulled it off!

SH: Do you know who’s this is? It’s actually a former One Direction member…

HT: We know exactly who that is.

TF: Zayn Malik from Bradford. We know who he is.

SH: Have you listened to One Direction or Zayn?

TF: I wouldn’t say that. Zayn Malik is a great popstar. I’m not gonna say, musically, he holds any interest for me. As a popstar, and frankly, a lad from Yorkshire, he’s doing well for himself. 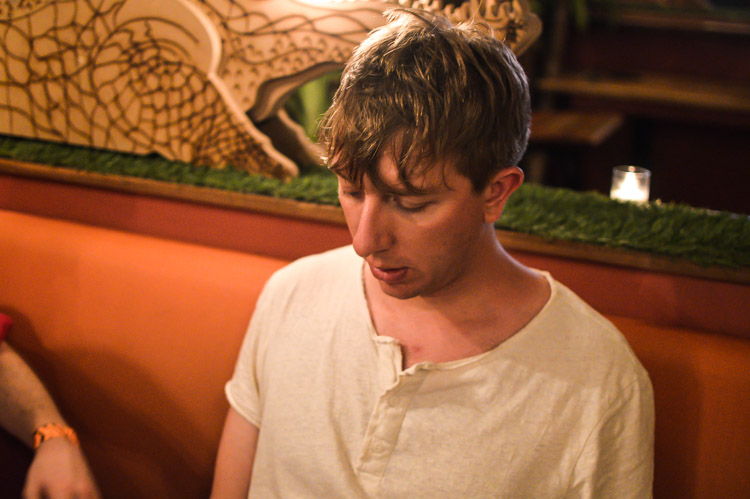 SH: Any cities back home that you’re excited to play?

TF: Oh, well, loads! Manchester will be a lot of fun. We’re London residents and doing two nights there as well. I always hesitate to say a fave.

SH: We interviewed Tourist a few weeks back and he said when times are shit, art is really good. Referring to Brexit and Donald Trump.

TF: I would take a good situation over good art. Inevitably, this does happen. What I don’t want to do is fall into the trap of that “art finds a way.” Art needs support. If you cut off the funding to education, arts can fucking fail. I do think it’s a very bad moment in the U.K. right now and the U.S. is not much better. I don’t know if it’s connected, but I think it was a bad moment for music when we started.

SH: Do you think there’s a difference in support for the arts between the U.S. and the U.K.? Think your programming might be better. At least radio.

CT: I think it’s less messy in the U.K. There’s not as big a geographical landscape.

TF: The more I come here, the more I realize the U.K. and the U.S. are just not comparable at all. It’s like 60 million people I guess in small space but aren’t there 30 million odd Californians? It’s just anarchic. What’s Louisiana got to do with New Hampshire? What’s Nevada got to do with Connecticut, you know what I mean? It’s insane. So much more is different than I appreciated.

BL: It’s always amazing touring with American bands. They have to travel so far. It’s heavy. Way more than we have to tour in the U.K. They have to do more miles. They play all the time.

Wild Beasts played a sold out show at Baby’s All Right. Check it out below. 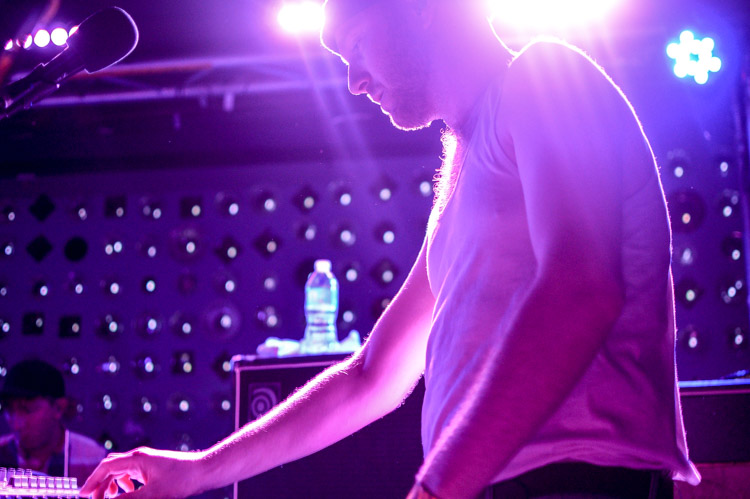 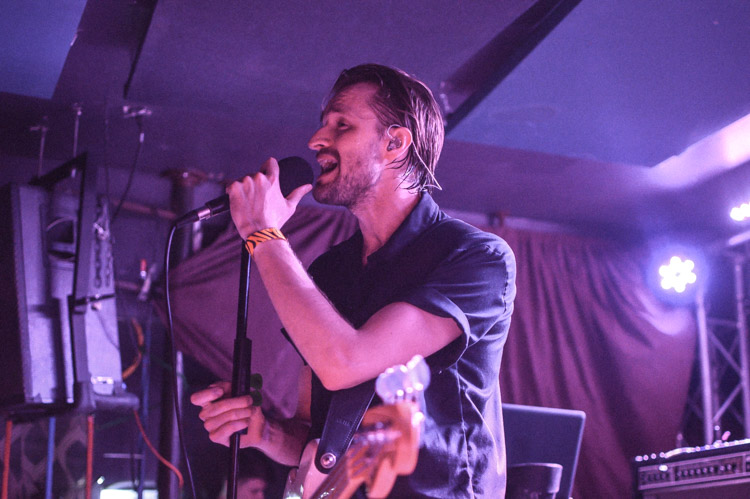