15 Minutes with Tourist at Panorama NYC

Amid the hustle and bustle of trying to see as many acts as we could at Panorama NYC, we took a welcome break to chat with William Phillips aka Tourist about his debut album U. The ten-track LP is a longtime coming and we’ve found ourselves listening to it on repeat without skipping a song. In case you’re in the dark about Tourist, he co-wrote a Grammy Award-winning song called “Stay With Me,” sung by a little known artist named Sam Smith. Prior to releasing U, Tourist put out three EPs (Tourist, Tonight, Patterns) and collaborated with Lianne La Havas, Years & Years, and Josef Salvat. He spoke to us about the inspirations behind his debut as well as his thoughts on the crazy political climate in the U.S. and his native U.K.

Read our interview below.

Sidewalk Hustle: So tell us about your new album U.

Tourist: People say it takes you all your life to write your first record. Writing it took me about 18-19 months. Conceptually, I suppose it’s like a journal really. It’s the arc of a story about the relationship I was in. Hopefully, it speaks for itself in terms of the themes. It’s obviously about a failed relationship. It’s nice to put it out, really.

SH: Did it take a long time for you to figure out what was going to be on it or were you kind of just living?

T: The way that I work, it takes me a long time to work out the main of what I’m doing. Once I know exactly what I’m going to do, the details are fine. I started writing a record like an album. It didn’t really have a cohesive theme. It felt kind of pieced together. With electronic music, you can definitely do that. You can have albums just exploring sounds and cultural borders, moving between dance music and hip hop and all these things, but I didn’t really want to do that. I felt I didn’t have much to say in that regard. I thought I’d do something with a bit of a personal story to me. Once I figured out I wanted to write about a relationship, it was a kind of weird mental click. As soon as I figured that out, then it all flowed quite naturally. I wrote down what that relationship was like to me, what happened, what were those feelings to me. Did I want the record to be solemn or somber and did I want it to revel in the happier moments. It’s all those things, really. I wouldn’t call it a sad record.

SH: No, it’s not sad! It’s not exactly jubilant but it shows a journey.

T: Hopefully, there’s a payoff in the end. A story there that’s interesting.

SH: We think so! Was there a part of you that was hesitant to write about your personal life?

T: Certainly! Especially in the realms of electronic music because usually it’s more austere. People will defer the concept to be about something else. You can write a record that’s conceptual. That’s about an imagined story or even, like, political things. For me, to do an electronic record about my own life was a bit strange at first. It made a lot of sense. I felt very creative whilst doing it. Once I turned that key it felt very flowy. It’s hard writing about someone, you know? I still respect that person and I still care about them. You don’t want to feel as though you’re calling them out in public. I’m not into that.

T: No and I find all that a bit naff. You’re always kind of using people as a means to be successful. Which is weird.

SH: In writing about other people and how they make you feel, you reveal a lot about yourself.

T: Absolutely. You’re the mirror through which you observe those feelings and emotions. It’s probably more about me than it’s about her.

SH: You keep mentioning that people don’t expect this honesty or maybe personal touches in electronic music. Do you think there’s a divide there?

T: To say that is probably quite untrue because I think that does a disservice to a lot of artists. There are electronic artists that talk about personal things and I’m really not the first person to do that. I’m not running a brigade of like emotional electronic music and everything else is really kind of cold and hard. That’s just not true. For me, that’s the kind of electronic music, whatever electronic music is, that I’m drawn to. I’m more interested in stories than scenes. I’m more interested in a narrative than techno, as an idea. And I do love and really respect musical cultures and scenes but I’m not really an active participant. I don’t really go to nightclubs. 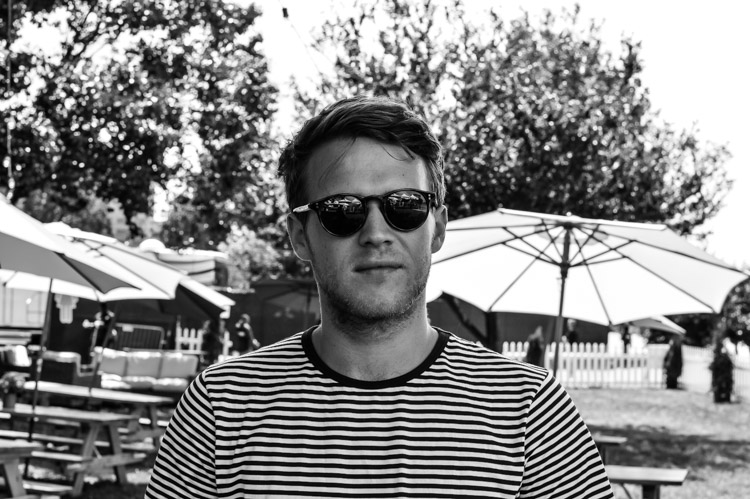 SH: We were just going to ask that! Do you go out?

T: My music doesn’t sound like I do. I listen to most music on headphones. It’s like a solitary thing for me. I mean, it’s cool when you play it to people.

SH: Do you think of the performance aspect when you’re writing?

T: I have done more so since performing a lot more. I think the record changed as I was performing a lot. I was like “Okay, cool, I’m going to make a tune that’s really loud and angry” and that was too late. That’s how those things come about. They come about from being on the road. Then I wanted to make a tune that will make people dance and that was what “Run” was about.

SH: Do you write on the road?

T: I’m having to now. Which is weird. I used to be very singular and go to my studio and sit and write. But now that’s not a luxury I’m afforded just because I’m quite busy now. I’ve had like 26 flights in the last six weeks. It sounds like I’m moaning but I’m not. It’s great fun! There’s so much time wasted on tour. You sit around all the time doing nothing when actually you could be really productive. I like laptops for that reason.

SH: Musicians can write at least part of what they want then bring that back to the studio.

SH: Are there any current albums that inspire you?

SH: Were you able to see his set yesterday?

T: No! I was in Seattle yesterday, which was fun. I’m listening to loads. This girl called Mitski. I really like her. In terms of more electronic leading stuff, I really like Kaytra’s album. It’s fantastic. I think he had a lot of weight on his shoulders. Otherwise, he could’ve been someone who was just sort of sitting on the embers of Soundcloud. Just become an internet artist. But he’s put out a really amazing and important record.

T: He’s really important. I enjoyed that. I’ll always enjoy what James Blake does.There’s definitely a mood for it but I think he’s nailed that mood. He’s a bit like Beach House in a way. They do one thing incredibly well. And I’ve been listening to Depression Cherry a lot.

SH: Have you seen them live?

T: I have! I was playing Field Day. They played a set and I was like “This is it.” Every one of their songs sounds the same but that’s great because it all sounds fucking beautiful. There’s nothing wrong with that. It’s like Monét. Each of his paintings was the same fucking thing. Water lilies. But it’s cool. I love the way they paint musically. They know who they are and they don’t give a fuck. Some artists don’t have to reinvent themselves. They can just be that. They do that beautiful, washy, dreamy, you just want to jump into it kind of music.

SH: Everybody in the crowd is feeling things.

T: It’s really drony and meditative and I love that. I’m just really into psychedelic stuff. All this music I’m writing is really joyous and trippy. 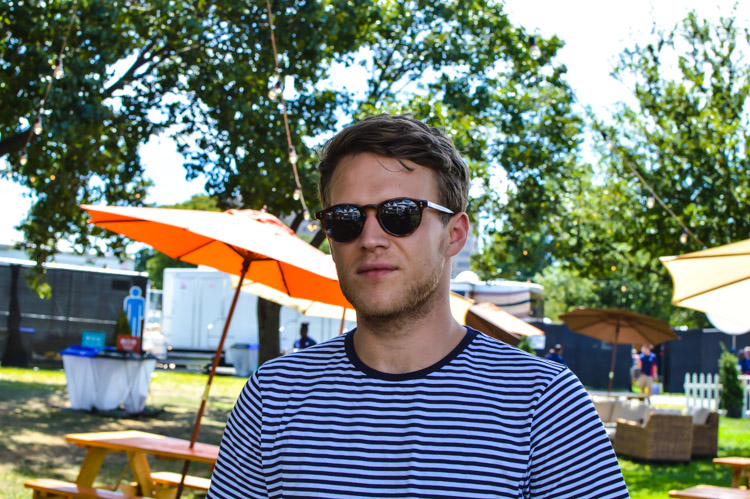 SH: Is there a live experience of your own in the last couple of weeks that you love?

T: I had a really good weekend this past weekend. I had really good shows. This is actually my last U.S. festival this year. I’ve been lucky.

SH: What’s your favorite city? You don’t have to say NYC.

T: They’re all different. It’s like asking who’s your favorite person. They’re all beautiful in their own ways. NYC is loud and noisy and amazing. Seattle I thought was beautiful. Reminds me of London in a way. I went to North Carolina to a place called Asheville. A sort of liberal arts college town that’s amazing. America is unequivocally beautiful.

SH: Yesterday, during Foals’ set Yannis introduced a song saying “This song is about the end of the world which seems like is about to happen.” Any thoughts on our political climate coming after the Brexit stuff?

T: I live in London. I live in Hackney which is a borough of London and it’s probably closest to your Williamsburg. Very liberal. I think I got caught up in the trap of thinking that Hackney was the UK. A lot of people feel as though their country, whatever that means, is being taken away from them. I don’t understand that. You don’t own your country, you’re just born here. They feel like people are coming over in gangs and taking over. A really strong part of that narrative is immigrants. It’s such a scapegoat. That’s really not the issue. I think it really appeals to some people’s anger. A lot of people are angry that social mobility maybe isn’t where it should be. You have a Black president but your police disrespect the lives of Black people. I find that horrid. How on earth is that the case? Then there are the people that say that “All lives matter.”

SH: They should but it’s clear that they don’t.

T: It’s horrible! Imagine if you said that in Germany in 1941. You have to acknowledge a problem before you fix it and I feel like they’re not and it’s just horrific. I think Donald Trump is just an egomaniac. He’s not a politician. He’s the worst part of the American dream. He doesn’t have any kind of grip on reality. He steps on people to get what he wants and I don’t think you should use people as a means to achieve your personal goals. When you look back at Obama, it’s like a really good girlfriend that you really miss. It’s easy to paint Hillary as the worst part of Washington. Trump is really doing that and it’s toxic. The whole world is a profoundly depressing place and you can see why everyone is playing Pokemon Go. All they want to do is escape.

T: That’s why art is so good right now. Life is so shit. Everyone is so inspired to make something to make themselves feel good.

SH: It’s funny how the worst climate results in the greatest are and expression.

T: Which is sad. When everything’s great, art is crap. Well, maybe that’s not true. It’s been very good for art. All these ridiculously important, amazing albums.

T: Unfortunately but maybe they could see this coming? Not that I’m a spiritual person. I don’t believe in God or anything but if you read the news, the world is not a pleasant place.

T: I’m looking forward to cracking on and getting my second record really going. I’m really inspired by now. I’m going to try to sort the kitchen in my flat. Got some more traveling so going on tour again. Read some books, go on some runs. That’s it really.