15 Minutes With The Last Shadow Puppets

Alex Turner and Miles Kane turn towards each other with fond looks when we suggest they’re best friends. Like doodle in each other’s notebooks BFF status. “Can you have more than one best friend?” Kane asks. Of course, especially when you’re internationally known musicians with hundreds of industry contacts and have graced many a society page. After spending 15 minutes with them though, we’re pretty convinced they’re going to grow old together in matching tracksuits. We met the pair in the lobby of The Bowery Hotel on an excruciatingly cold day to talk about their sophomore album Everything You’ve Come To Expect out on April 1st (Domino Records). They finished each other’s sentences, spoke over each other, and went on ridiculous tangents. Read our interview below.

SH: It’s been eight years since you’ve been together as The Last Shadow Puppets. How is it diving back into that again?
Alex Turner: It’s a swan dive, a pike.

SH: Did you miss each other?
AT: We’ve seen each other sufficiently. I mean there’s been a month, maybe two-month long…What would you say the max is?
Miles Kane: Six weeks, two months, maybe. When I was on tour in Europe and Alex was on tour doin’ AM, it probably did go more. I lied, just then.
AT: There’s a few moments when you think…
MK: …God, this is goin’ on a bit, we haven’t seen ya…
AT: Starin’ out the balcony at the moon, wonderin’ where is he, what is he doin’ now, who’s he kissin’.

SH: You definitely can! So, why come back together now? Did you always plan to come back and why did it take so long?
AT: Not always, to be honest. When we did it in the first place, we didn’t necessarily design it to be an ongoing thing. It was just an experiment, an adventure, to attempt to do somethin’ else for a minute. A few things contributed to us wanting to do it again like having a blast doing it. People responded to it really well. We’d always get asked about it.
MK: It was amazin’ how every day you’d get asked about it.
AT: Every day?
MK: Every breakfast, you’d get asked about it.
AT: There was a lot of like “I love what you’re doing, Miles, with ‘Don’t Forget Where You’ve Been.'”
MK: “Don’t Forget Your Toothbrush.”
AT: “…but when are we gonna get another…”
MK: “When are you getting back to the real thing?”
AT: There was a lot of that but it just didn’t make sense to do it. Not enough time to do it and I just had this idea that we’d need another Scott Walker-type stimulus that we obviously had on the first one. Enough time passed to arrive at the realization that the main thing is the idea of the collaboration between us two and writing together. So we started to do that anyway for what we thought was maybe gonna be Miles’ next solo record slash Broadway musical. At one point we had this song called “Aviation” which is track one of this album. I sang a harmony on the 8-track demo that we done and it sounded particularly Shadow Puppet-y. The feel of it, there was definitely the capacity for an orchestra. The harmony that we did reminded us of “Standing Next To Me” but looking in a different direction, pointing towards this thing that’s difficult to define. There’s this sort of shimmery quality to it that we’re excited by and we thought maybe we should chase that twinkle. We thought the stuff we started writing could be the start of the next Puppets thing. We convinced James Ford to do it again which was an important part. We played him some of the demos we had and he was into it. 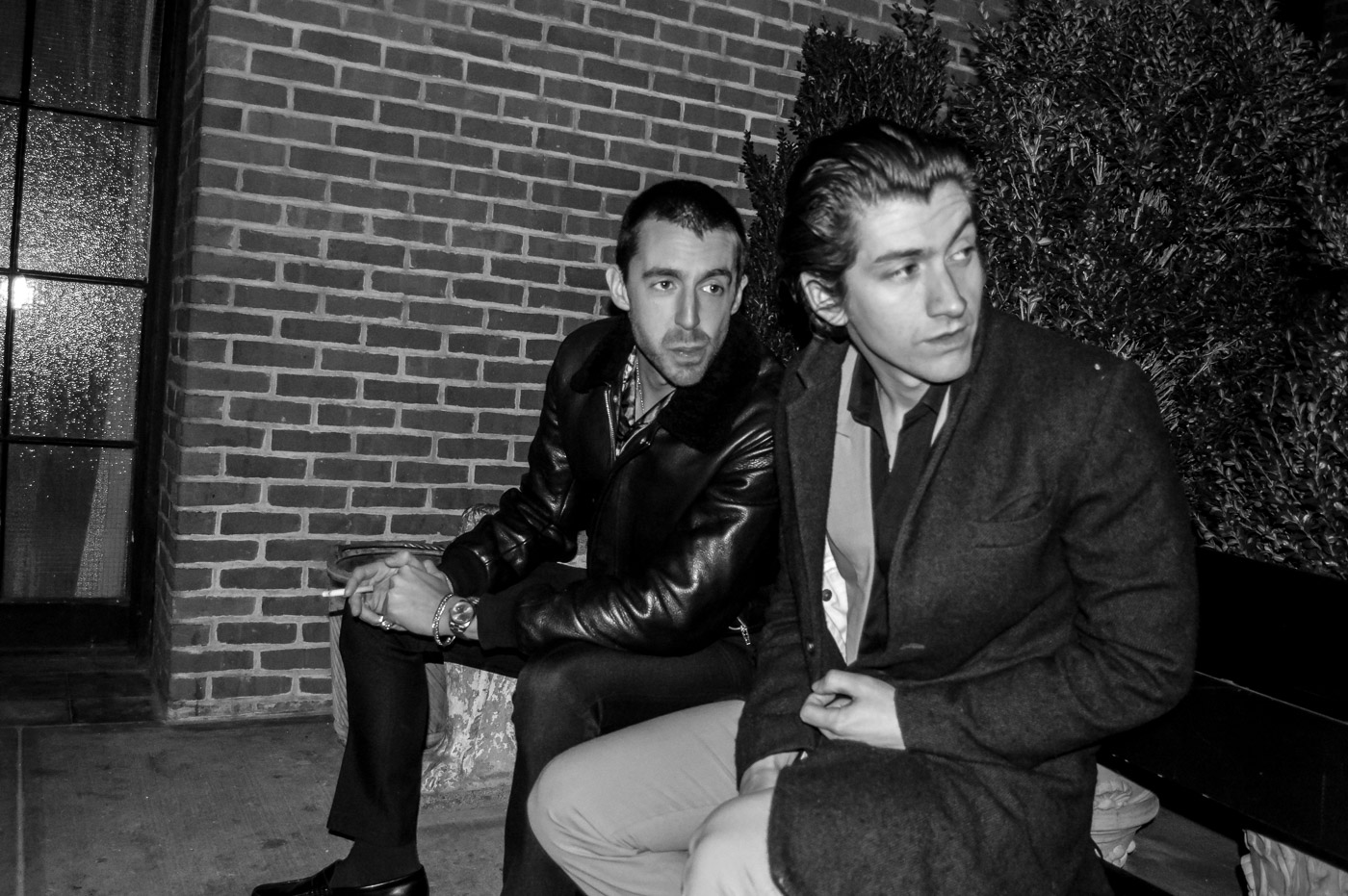 SH: Would you say the album grew out of “Aviation”?
MK: That’s safe to say, yeah.

SH: Was it a quick process? Easy to keep going?
AT: We were still both on tour then.
MK: There was a month here and there after that where we blocked off time. Sometimes we didn’t even write. I’d travel to LA or something.
AT: We’d been hanging out. We hung out a lot at that time not writing but last Spring we really hit a momentum.
MK: Yeah! We got a few in the bag where you could see an album. You could imagine it.

SH: Does performing, whether separately or together, inform your writing?
AT: These days less so I think. We keep it pretty separate in my mind. It’s kind of a classic approach.Writing chords, lyrics, and melody. It’s not us two and an acoustic guitar. We tried to take the same attitude as the last one as much as we could. Part of that was not knowing whether we were gonna play it live. That’s why it added bells and whistles as it were.

SH: It wasn’t at the back of your mind? Thinking this is going to sound really good live?
AT: More so this time we thought we’re probably going to tour. But it didn’t prohibit us from doing anything really. It’s still supposed to be a record first and foremost and then we’ll figure it out. Don’t get me wrong! We’re delighted that we’re going to be able to play it cause neither of us have done that for fuckin’ ages either. I think this is the first time we’ve had a year since we were 18 where we’re not on stage.

SH: For new fans who’ve just caught on, what can they expect from this album and your live show?
MK: Where have they been?!
AT: Right. I haven’t got a fuckin’ clue.
MK: Tears.
AT: Projectile hot tears.

SH: We’ll all be surprised.
AT: Me included. I really don’t know. I got really excited about it the other week. We were trying to learn how to play the songs. When you’ve been doing that every night for so long and then you don’t do it anymore, it has an affect on you.

SH: It’s not like riding a bike?
AT: Eventually it is. It’s slow-going. I’m out of breath at the moment. It affects you when you don’t have that outlet anymore. It affects how you feel.

SH: If you take a break from performing what is your outlet then? What’s the alternative?
AT: Hot yoga.

SH: That’s a very L.A. thing to say.
AT: No! I’ve never done hot yoga but I’d be willing to give it a go. I’ve heard great things. My outlet is riding a motorcycle. The vibration that that gives me is exciting. Recording and writing, you get a bit of that but this is not about me. Don’t lead with this. “He’s not been on stage and now he’s really sad.” 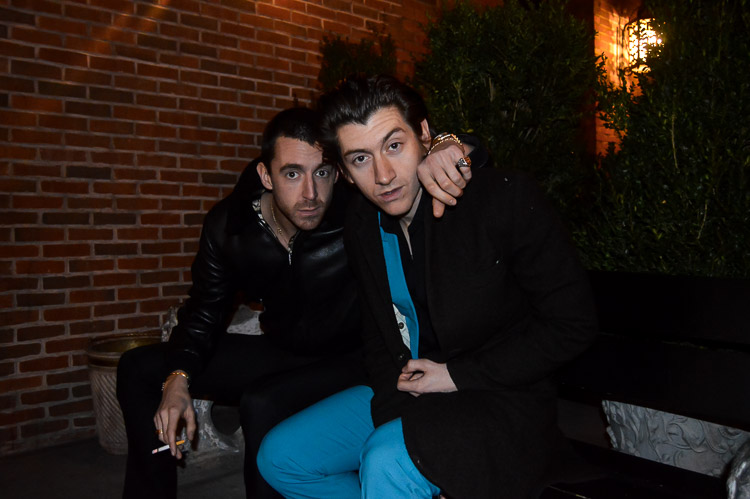 SH: How did you communicate about the writing when you were apart? Email?
MK: We’ve never done that. I’d love to watch us Skype each other with two acoustics on our laps because that would be a Golden Globe performance.

SH: We’ve heard of entire albums being written and recorded without people meeting.
AT: Yeah, Willem Defoe is on the new record! No, I’ve read those interviews and it’s like  “Well, we didn’t meet it was just email.” Even before we were writing this, invariably, we were together and we’d pick up a guitar and start shouting at it. I’d be in the shower and I’d hear him playing “Nothing Lasts Forever” in the living room really loud.

SH: Someone would pay good money to see and hear that.
MK: Yup, that’s it. I forgot about that. That happened.

SH: Oh, you’re not kidding?
AT: That’s the closest to the truth I’ve been all day. 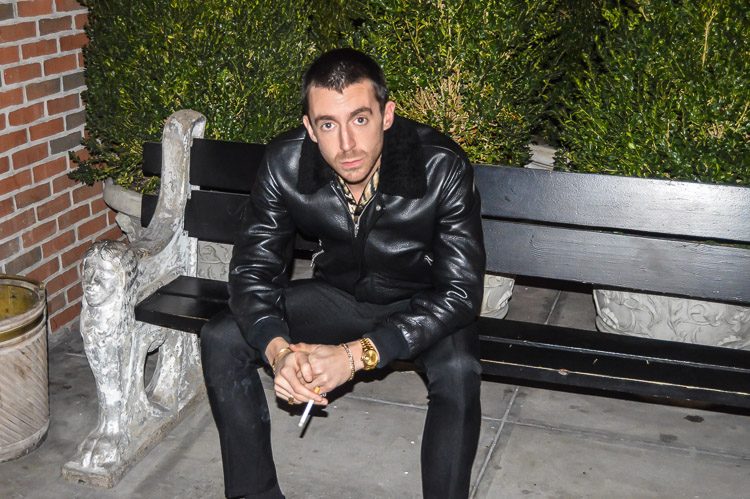 SH: Anybody you’re excited to see live this year?
MK: We’re just gonna watch back every show we do. Really excited to see Radiohead at Primavera…
AT: Richard Hawley is playing Primavera. That’s a safe bet.What’s the one we talked about the other day?
MK: Mark Ronson? Can’t wait to see Ronson’s DJ set.
AT: He’ll bookend his DJ set with “Uptown Funk.” Seriously. We’ve got down to that before.
MK: I fuckin’ like a Mark Ronson DJ set.
AT: Seriously, I’d take that again.
MK: I’d take that tonight, you know. I’d love a fuckin’ Ronson DJ set.
AT: I would love to see again someone I saw last year and it was one of the best fuckin’ gigs I’ve seen for ages. Hamilton Leithauser. I saw him play at Club Bahia in L.A. last summer and it knocked me socks off.

SH: That’s a line from the new album kind of. “Let me know when you want your socks knockin’ off.” We heard it and really like it. Some Arctic Monkeys fans might not be expecting it but music fans will love it.
AT: We had a bit of that on the last one but not really too much. I can’t remember that being much of a problem. Like someone shouting “Mardy Bum.” Once this guy starts doing a headspin, no one’s going to worry about “Mardy Bum.”

SH: To wrap up, you started out saying The Last Shadow Puppets wasn’t meant to be an ongoing thing but is it now? Do you plan to take time off every couple of years to write together?
In unison: There’s no plan.
AT: In another couple of years, I imagine we’ll be part of the Avengers franchise.