“Isolation in the mess to analyze the head and chest / No outside cure for loneliness, it gets me every time”

Does that sum up our pandemic feels or what huh? So goes the lyrics to “Draw Me In” (below), the latest single from Sunglaciers and the first we’ve heard from the Calgary based band since their 2019 debut LP Foreign Bodies. Now they’ve made their blazing return with co-production by *the* Chad VanGaalen and engineer Mark Lawson (Arcade Fire, Yves Jarvis, The Unicorns) on the mix, newly signed to Mothland with a much anticipated sophomore record on the way.

Sunglaciers are already criminally underrated and a must add to your playlist for any fans of MGMT, Interpol or  bright bouncing rhythms matched with anxiety inspired lyrics + invigorating vibes. Mood right? Conceived in 2017 as a collaboration between vocalist/guitarist Evan Resnik and drummer Mathieu Blanchard (both multi-instrumentalists), the psychedelic post-punk indie act have since grown into a four-piece featuring Kyle Crough & Nyssa Brown (also both multi-instrumentalists). 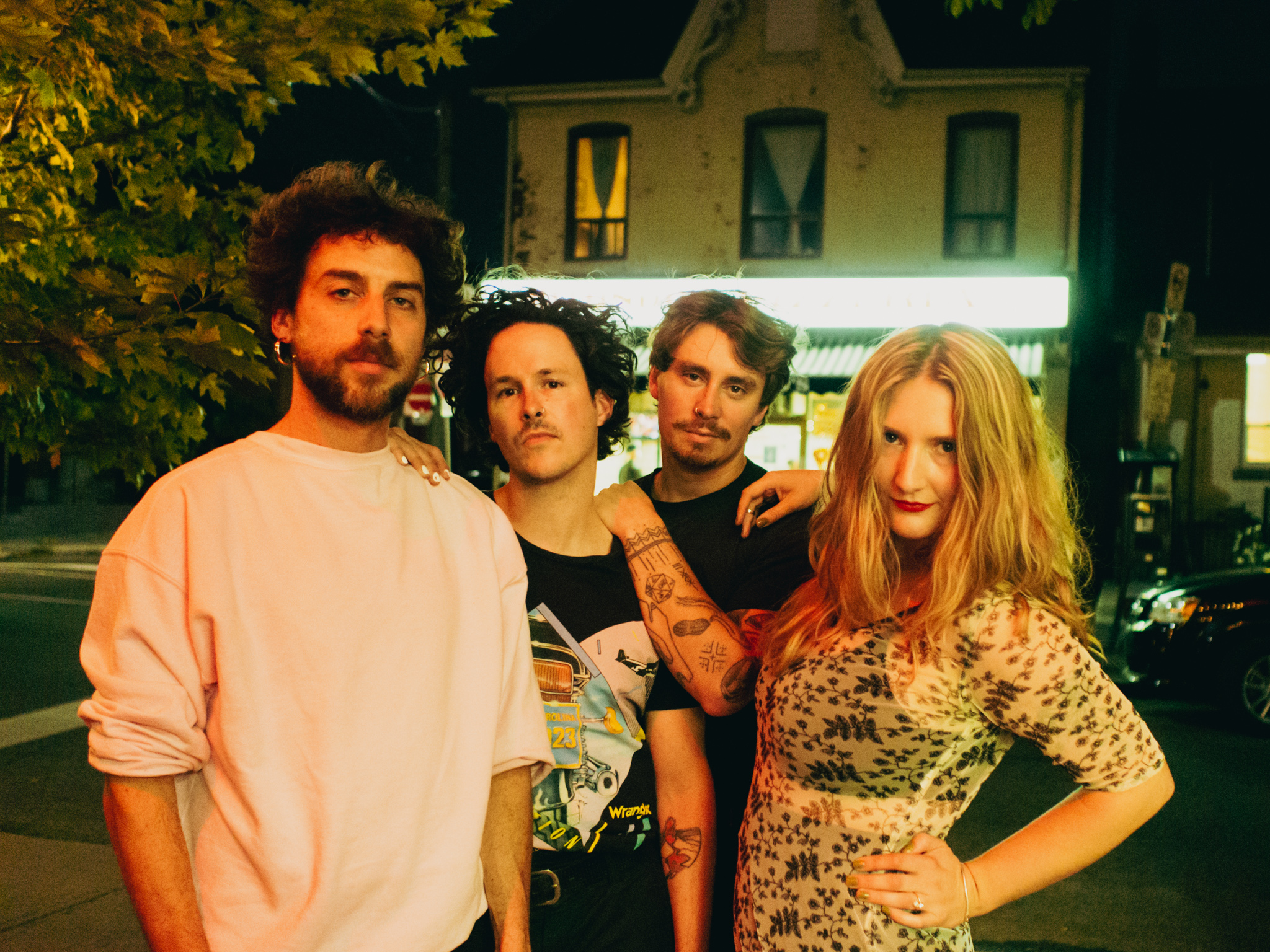 We caught up with Sunglaciers fresh off their UK tour, before their candle-lit limited-cap seated Toronto set. The full moon was in Aries that evening as Sunglaciers played the Monarch Tavern and gave us a sonic sneak peak of their second LP. Dig into our convo below to hear all about what’s on the horizon for this beam-of-light of a band & the making of their new album Subterranea – due out 2022. 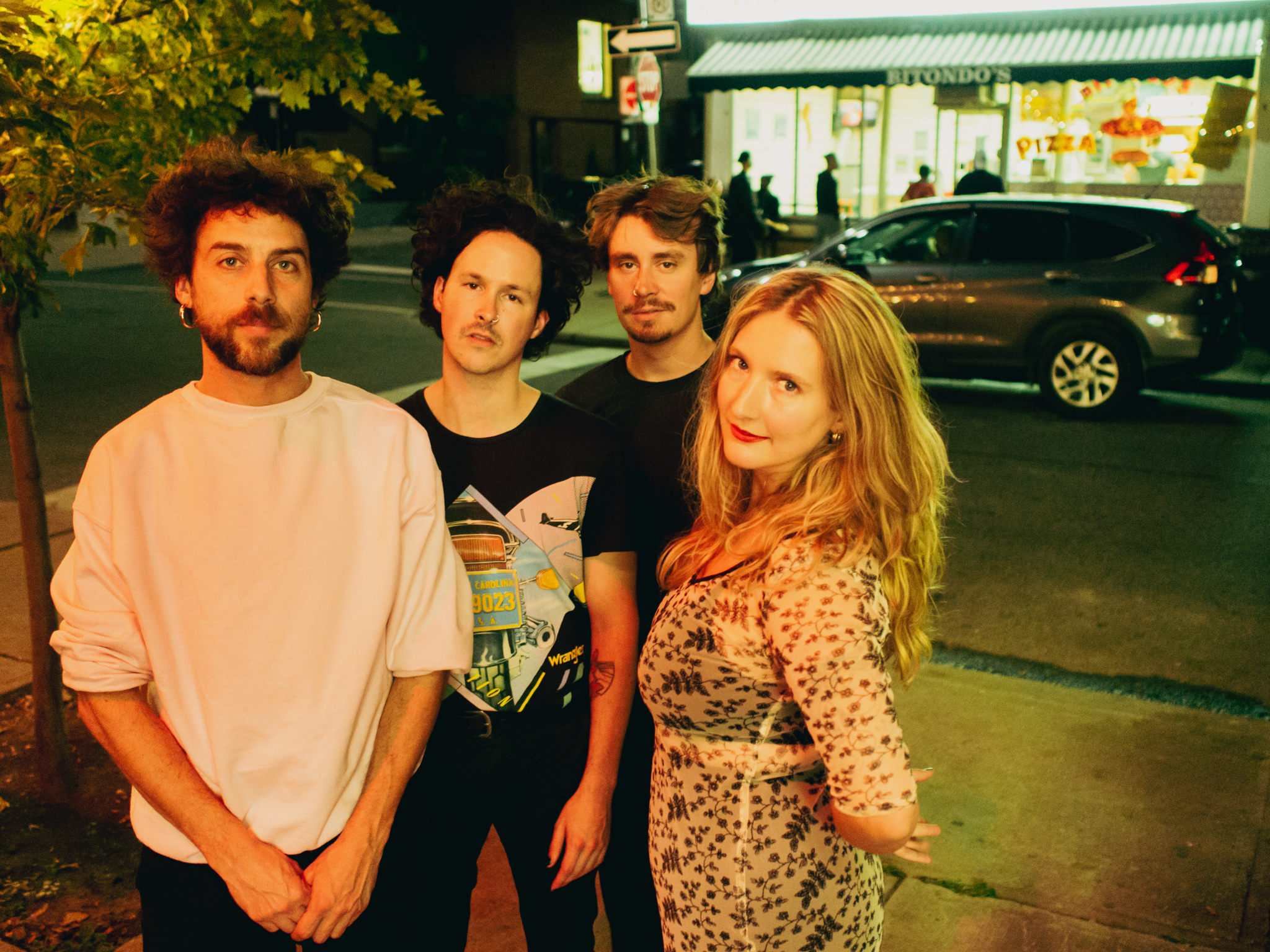 Sidewalk Hustle: You just came back from your UK tour. Is this your first Canadian gig since going across the pond?

Evan: This is the first Canadian date on this side of the U.K. sandwich.

What was it like hitting the stage the first time “back” on tour?

Kyle: It was great. Emotional. A little traumatic because we all had injuries at our first show back, but it was great to see a bunch of smiling faces. People were moved by it as much as we were. After this cave that we’ve been living in, it felt like a community again. It was rewarding, it was lovely, it was magic.

Mathieu: Even when stuff had been opened a little earlier, it was the first show for a lot of the bands that we played with and that was a great vibe. We would get it over and over again, so that was sick for us… The energy was just there every night whether it was a Monday or a Tuesday. People were super stoked the whole time.

Evan: A lot of the audience members too, it was their first time back in a venue. It was really exciting, renewing our energy every single day. 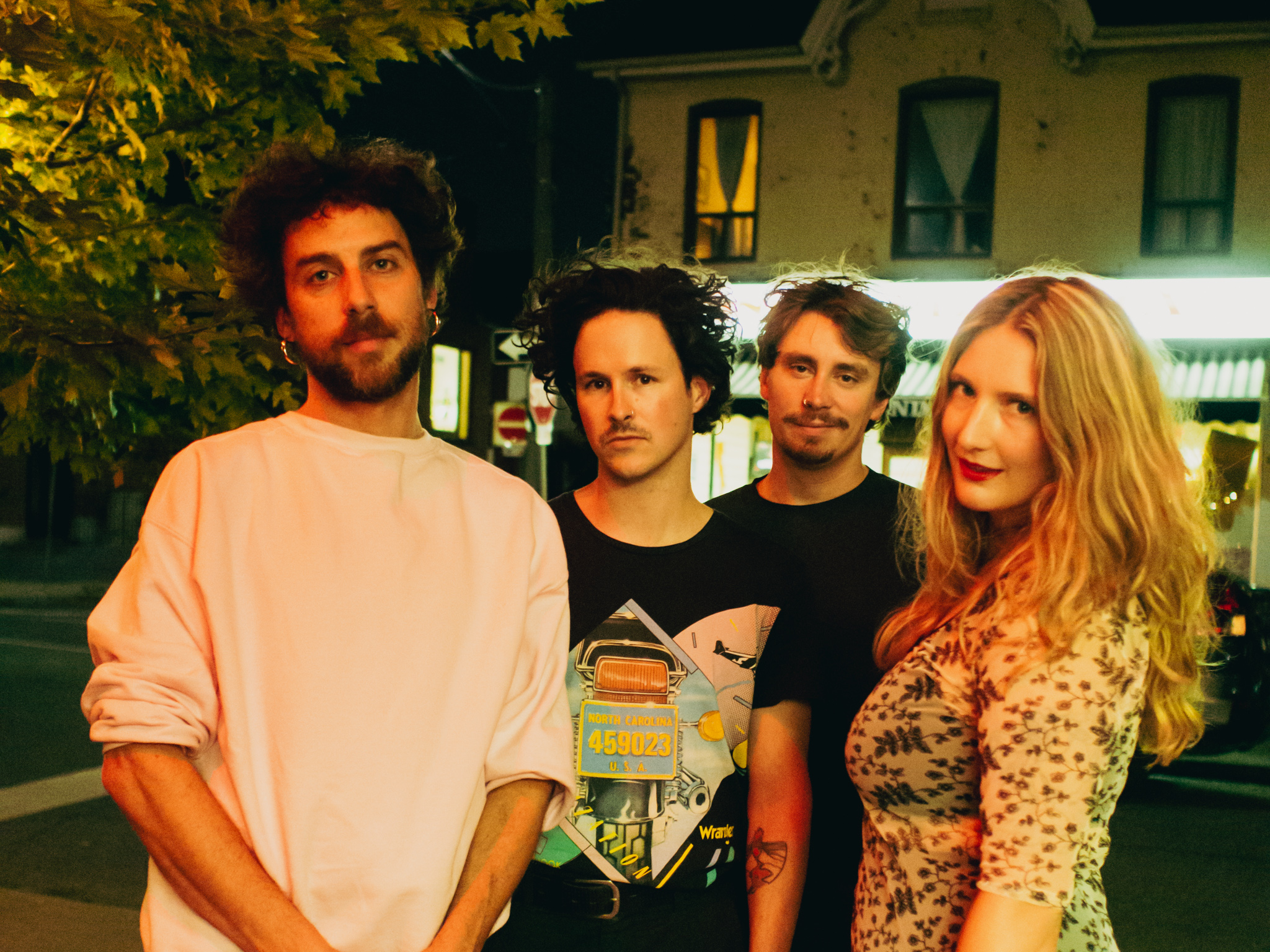 Do you feel safe touring again with these new pandemic anxieties?

Mathieu: Everybody in our circles are vaxxed. As far as we know, everybody at the shows are vaxxed. Because [the UK was] open back in July, they were used to going to bars and not wearing masks. There was really no hesitancy at all.

Evan: Very warm crowds, very warm audiences. Lots of hugging, lots of shouting. It didn’t matter if there were twenty or sixty people, there’d be a huge cheer after every song. It was really cathartic.

Mathieu: Handshakes were back. I thought they might be out forever. Handshakes, hugs and kisses.


Nyssa: This is a weird analogy but certain animals are very sensitive to how much confidence you have and if you’re scared. I felt like when we were [touring the UK], we had to be confident and the audience was like, “Yeah they’re not scared so I’m not gonna step on their feet. I’m not gonna kick them when they walk behind us.” 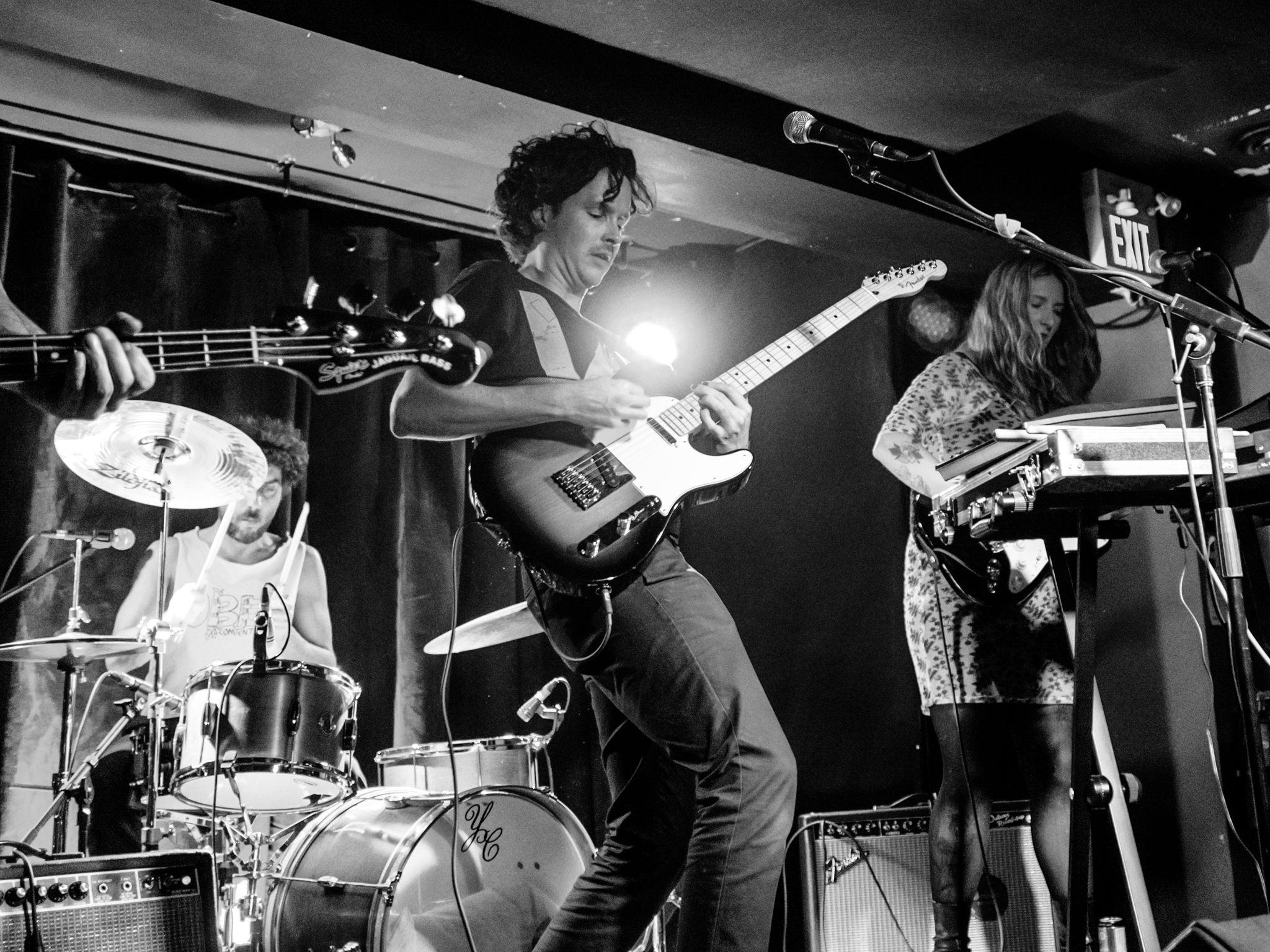 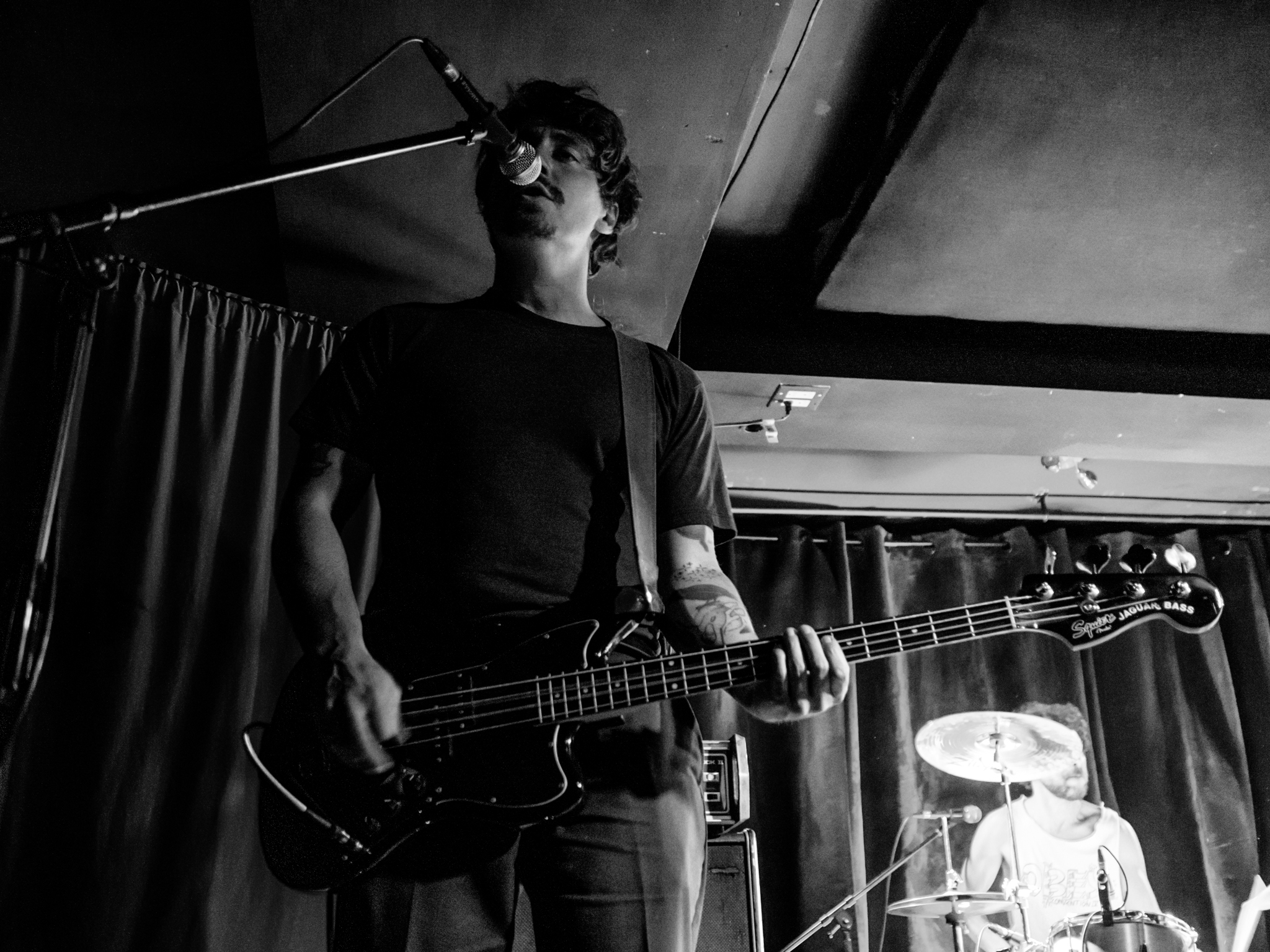 Was there anything you didn’t realize you missed until you were playing and touring again?

Mathieu: All the bullshit that I hated about touring. I was just way more positive about all the usual stuff that drains you.

Kyle: I’m the van packer and organizer, the Tetris lord and I’ve missed that so much…getting a space and navigating it.


Evan: You should have seen the van today!

Kyle: I did not approve! *laughs*

Nyssa: I miss blacking out while we perform. Like … I don’t really know what happened but that was really fun. You can’t just do that at home by yourself.

Mathieu: Just washing the dishes for 15 minutes and you forget where you’re at. 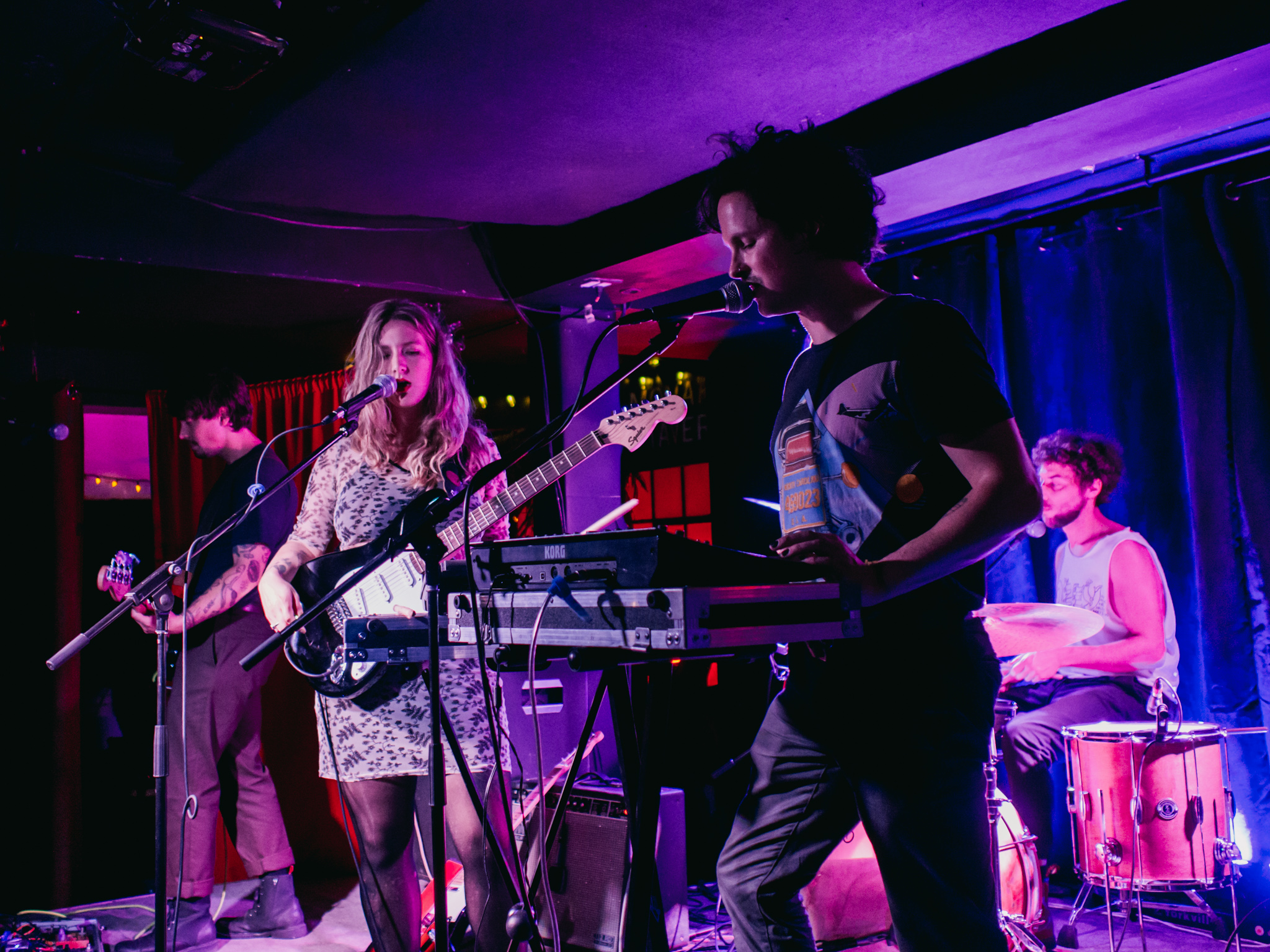 We love the new single  “Draw Me In”– Tell us about it!

Evan: The new single is kind of poppy, kind of psych-y… someone said to us the other day it has a buoyant, uplifting sound but you read the lyrics and it’s incredibly bleak and dark. That’s exactly our lane of the highway.


Did you find that writing music throughout the pandemic changed your process in how or what you write?

Kyle: Mathieu and Evan were in the studio every single day working their asses off and it really showed. Just having that time to marinate and try different approaches and techniques and to talk to different people and work with different people. It was great and this record is going to show how much this band has evolved since the last [album].


Evan: On top of that, Mathieu and I took an intentional approach to not write guitar rock, not write on our comfortable instruments, to try and branch out that way. Instead of having these long meandering psych tracks that bounced around from idea to idea, we tried to condense everything into little nuggets. So this album is a bunch of tiny worlds, one after the other, instead of this broad expanse. 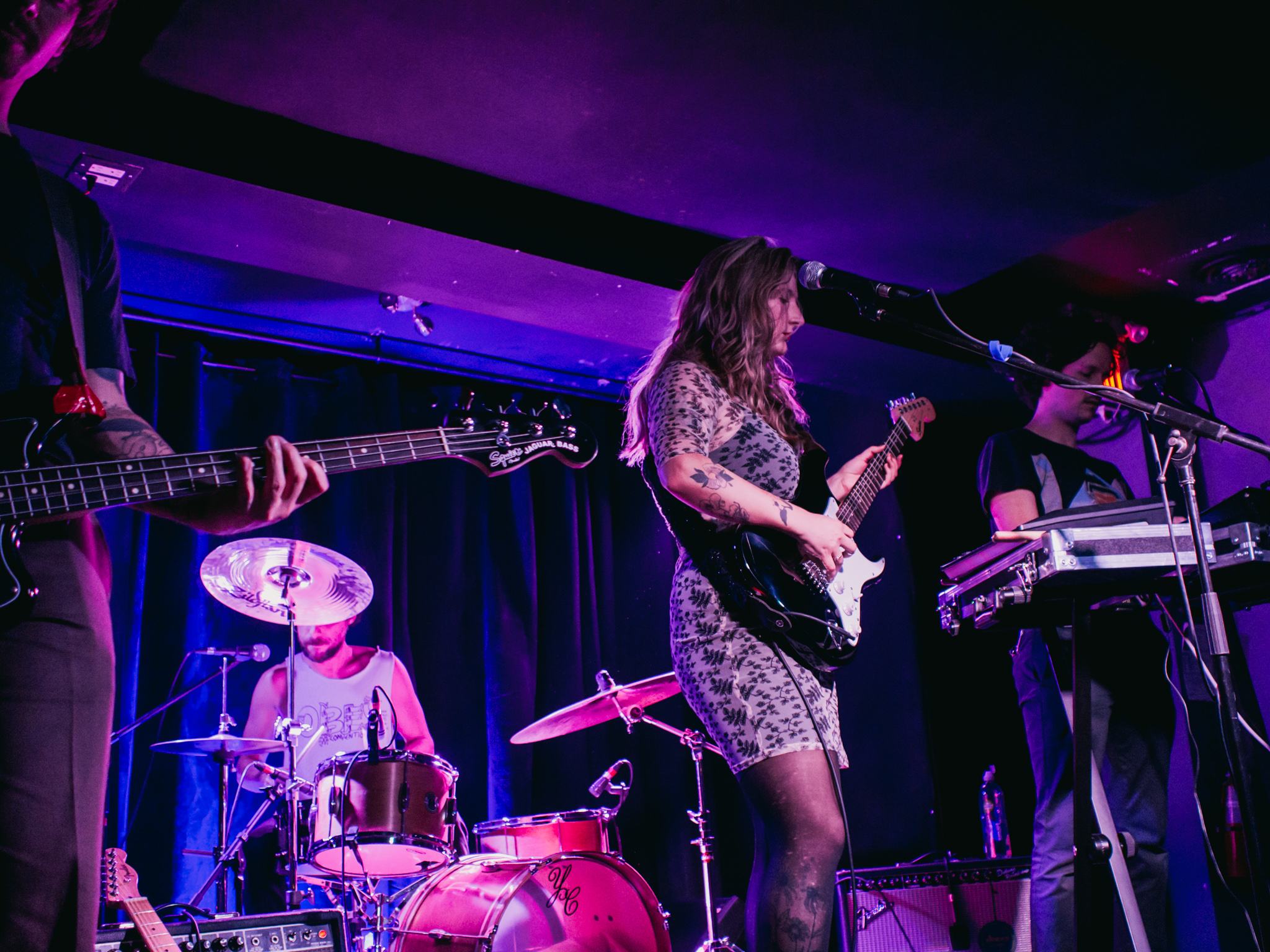 We can’t wait for the new album! Congrats on getting signed to Mothland!

Mathieu: We got signed to Mothland! Chad VanGaalen helped out a lot. The team has been so helpful, above and beyond honestly. Then we got Chad involved for the single. He really amped the track up. That’s the song he changed the most but he did a bunch of stuff for the other songs.

Kyle: You can expect the record early 2022. That’s what we can say.

Evan: Long done! We are now finally in a privileged place to play them live to people.


Nyssa: It’s sweet for me because I just joined the band and I don’t know any old songs! *laughs*

Hyped to hear it. How did you link up with Chad VanGaalen to co-produce?

Mathieu: We were thinking of him to mix the record because when we got into our studio, we had a bunch of gear & we thought, “Let’s record it ourselves but get a pro to mix it for us.” So we thought of Chad – He wasn’t stoked on that idea but said “I’ll help you co-produce it and add some stuff to the songs.” That was an even better idea.

Kyle: Definitely a better bargain because we got to pick the brain of this brilliant man.

Mathieu: Doing something he’s the best at then shipping it to someone who mixes, who loves mixing and only mixes. We got this guy Mark Lawson in Montreal. In his own right, he changed the record again. This is the first time we’ve collaborated on a record but also brought in outside forces that were multiple steps ahead of us to really hone it in.

Evan: It gave us new insight into the creative songwriting side of things with Chad with how he manipulated and added to our ideas but also on the recording/engineering side, the way Mark mixed elements and brought certain things up and totally transformed the landscapes that way. It was a crash course using our own material and it made the record better in the process. Huge benefits all around, we’re super lucky. 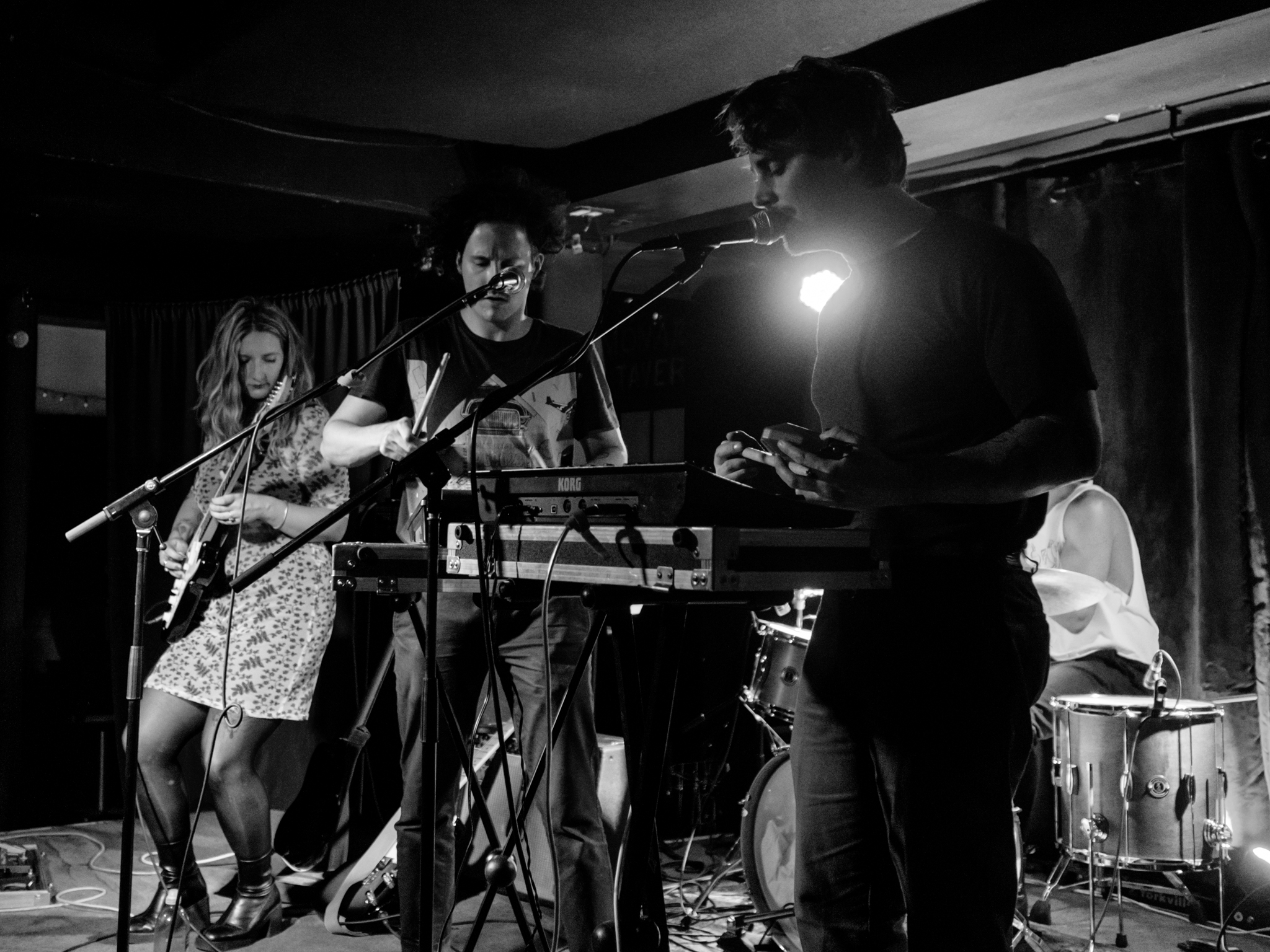 Any stress or weirdness about releasing your second album? They call it the sophomore slump but you seem excited because the second album is even more realized.

Evan: Well there’s that but also the world shutting down for a year and a half really helps wipe the slate clean for everybody. We’re jumping out of here with this new record. Yeah sure it’s our second but it’s not like our first was a smash hit. This is the sophomore surge! 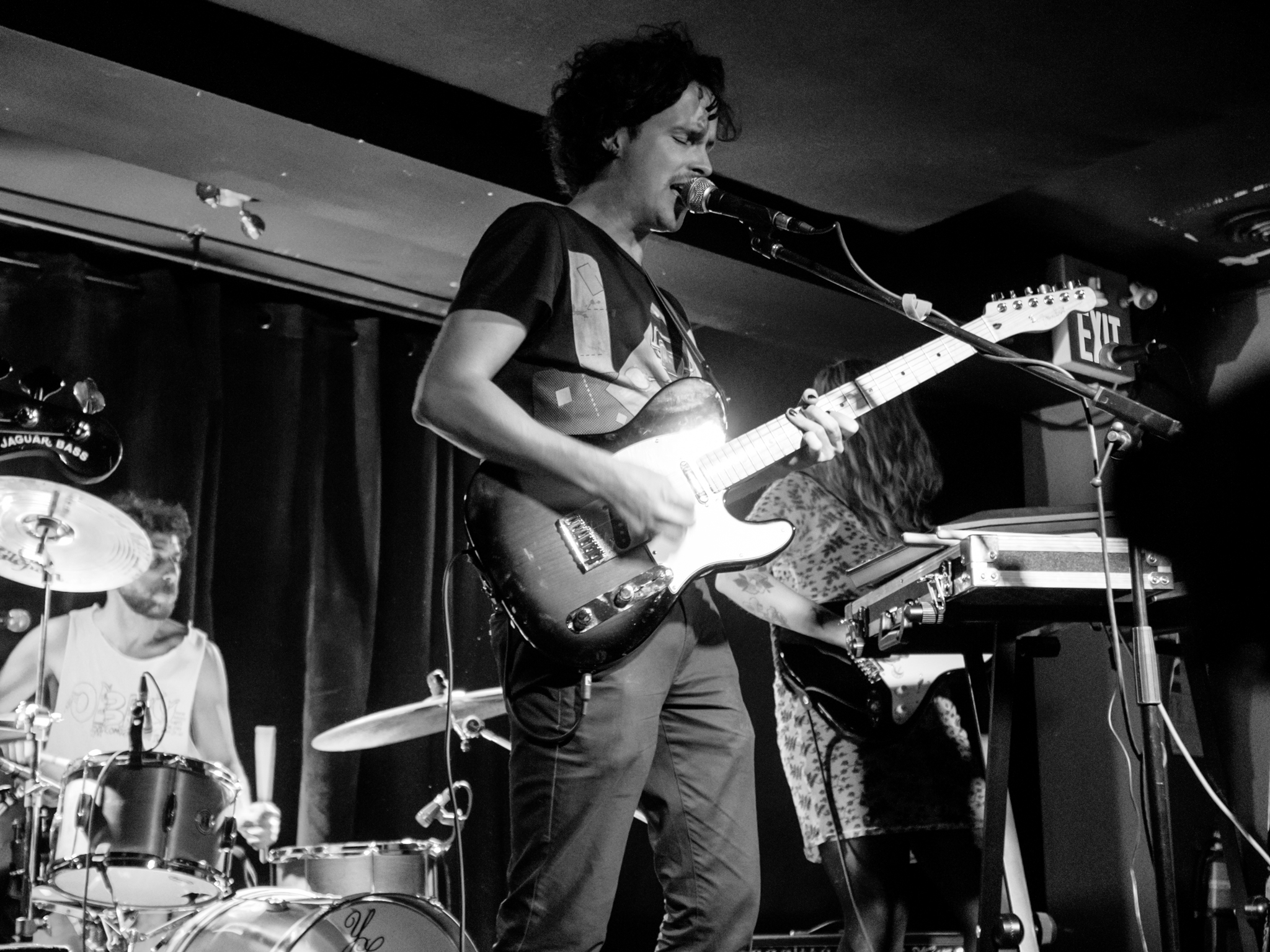 Compared to your first album, you said the second one has these different little worlds. The through-line for it, if you had to describe the album, what tastes or tones come to mind?

Mathieu: It’s called Subterranea, to give that vibe of underground, pipes, subsurface, darkness, bleakness. Not a pretty shell, how people present themselves.

Evan: What you say you are vs What you are inside and how you navigate the space between those two. The mental spiral.

Nyssa: It’s interesting too because I wasn’t part of the writing process. I came in learning and playing the songs. We’re moving around a lot – we’re switching instruments when we perform them. In that, that is resurfacing and coming out and coming in and we’re cycling through the songs just by merely performing them on a stage. When we only played one or two songs before we left on this tour and by doing the tour, show after show, moving changed the dynamic of what you hear and see because different people are playing the same instruments.

Evan: You gotta make these sounds happen. Sometimes you gotta move some shit around and move yourself around to get there. 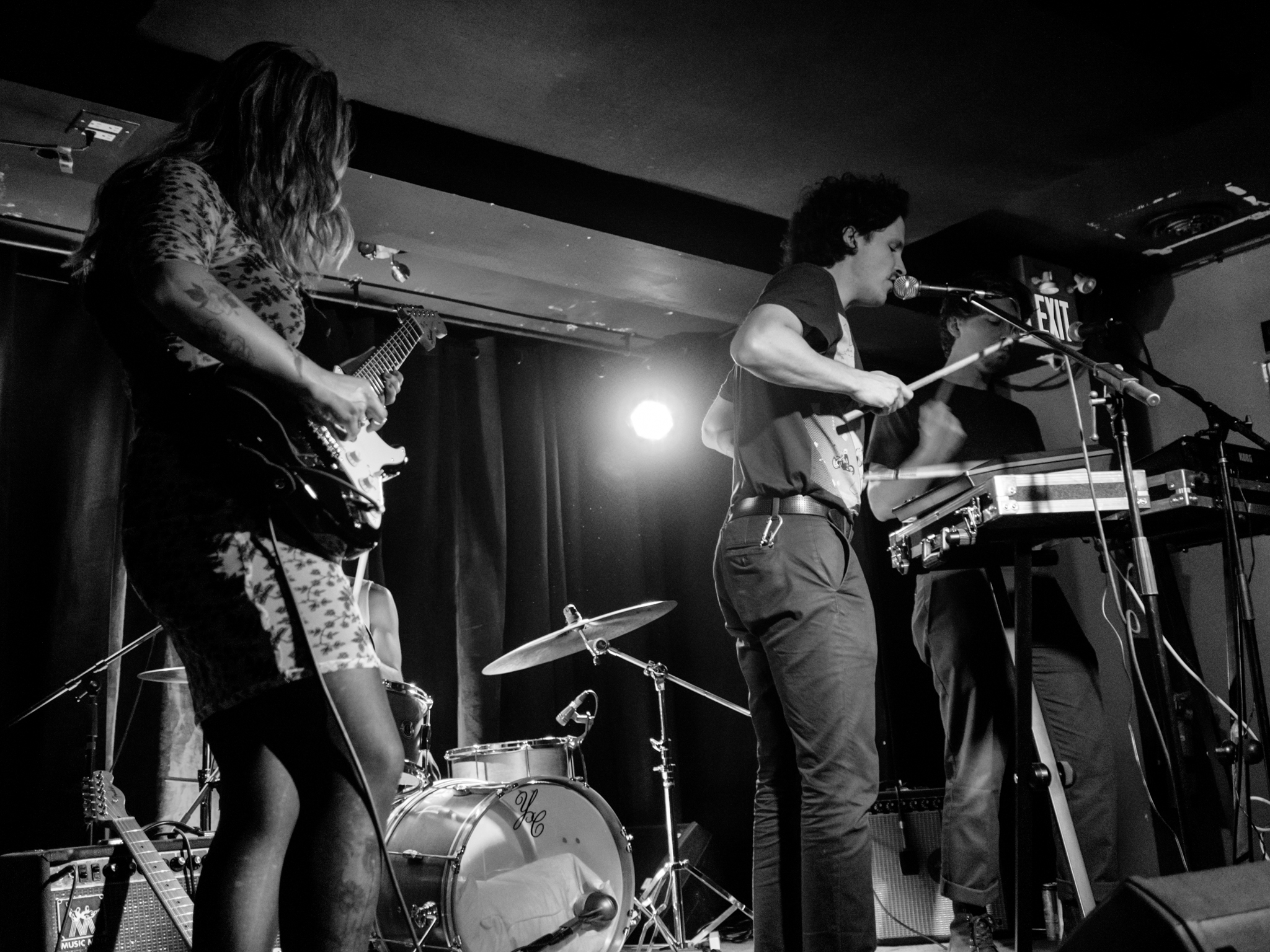 The last question we always ask is: Any advice with anything – Anything at all?

Nyssa: Drink water. To non-dudes: play music. Perform. All our friends who aren’t dudes – Get on stage! Please! There’s another band playing with us tonight featuring a woman on stage – that’s three total out of 56 personnel of all the bands we’ve played with. That’s bleak… Things are changing but it’s not enough, so do it!


Evan: Nothing matters, you’re going to be dead soon. Have a good time! 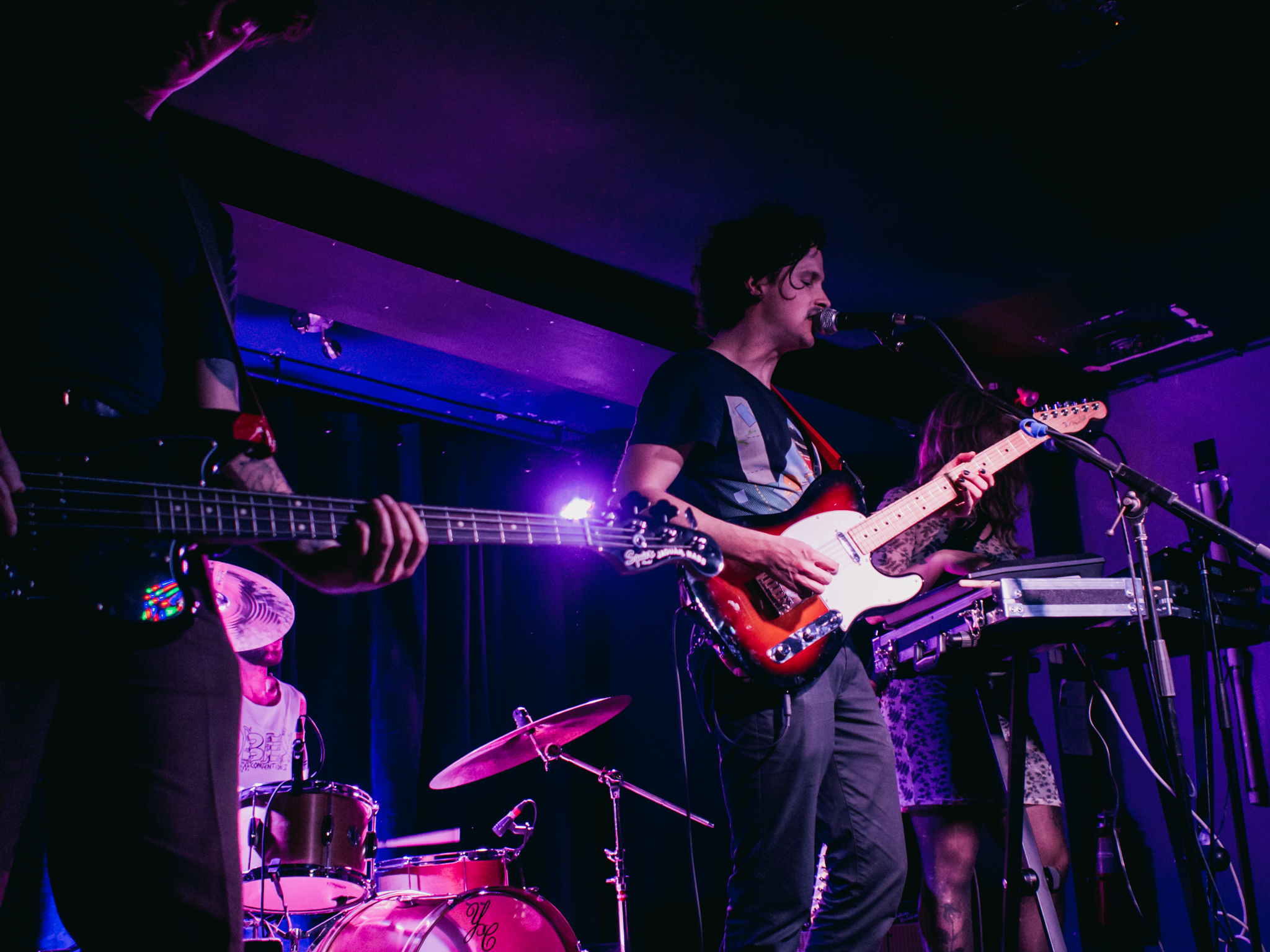 Catch Sunglaciers live this Friday Nov 19th in Montréal at Sala Rossa, a part of the M pour Mothland showcase at M for Montreal. 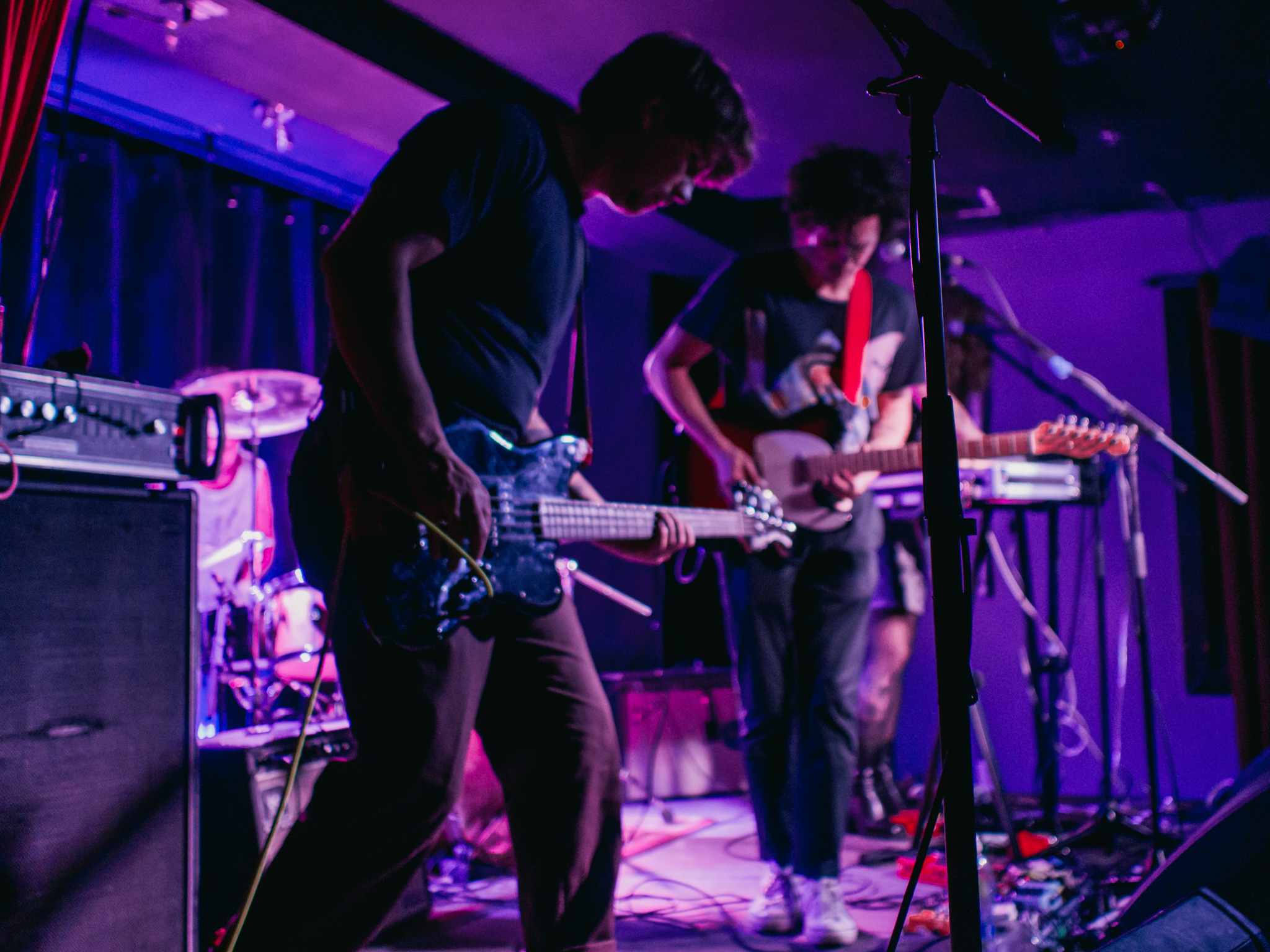 All photos by Kate Killet.
This interview has been edited and condensed for clarity. 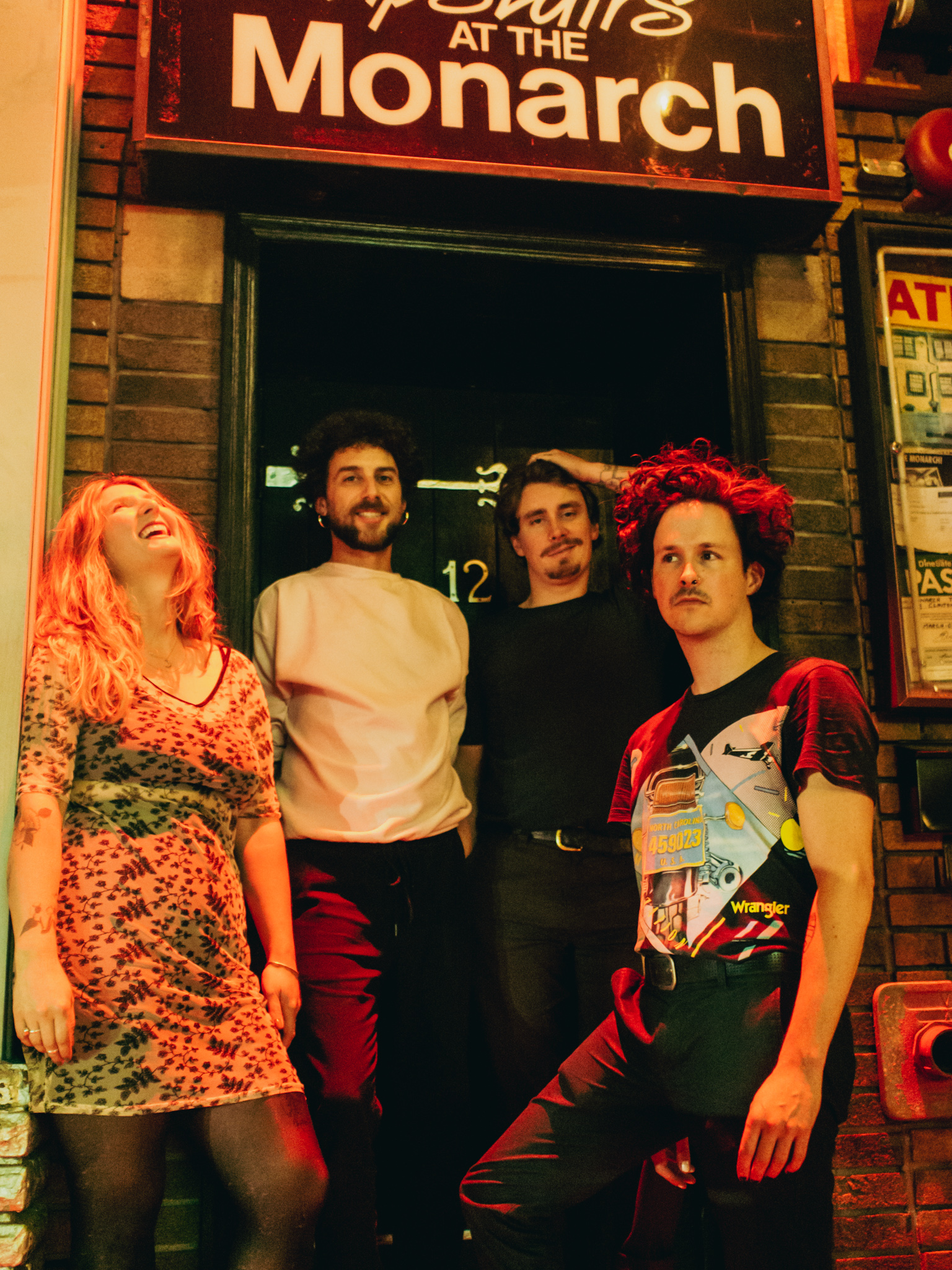