Cadence Weapon (also known as Rollie Pemberton) grew-up in Alberta with a hip-hop DJ as a dad and quickly started rapping at the age of young age of 13. Flash forward to the top of 2018 and the artist often simply called Cadence re-introduced himself with his fourth record, an aptly self-titled piece with the artist as realized as ever.

The album is STACKED with top-notch collaborations featuring Deradoorian, Blue Hawaii, Brendan Phillip, Kaytranada, Jacques Greene, Harrison AND MORE! Sorry, we’re so hype but with albums this good we can’t help it. Marinated between Edmonton, Montréal and Toronto it’s a truly Canadian record and Drake should be jealous. With a handful of previous Polaris Music Prize nominations already under his belt, his latest self-titled album proves to be perhaps his best yet and unsurprisingly is already nominated & on this year’s long list. There’s a reason he’s called the country’s most creative rapper and was appointed Poet Laureate of Edmonton. People don’t just give that shit away.

We caught up with Cadence on one of the city’s last snowy afternoon’s earlier in the spring as flower buds could be spotted poking through the fall snowflakes. We hit up Allen Garden’s to heat-up a lil’, only to get kicked-out. Oops! From there we found a cozy corner in Kensington… 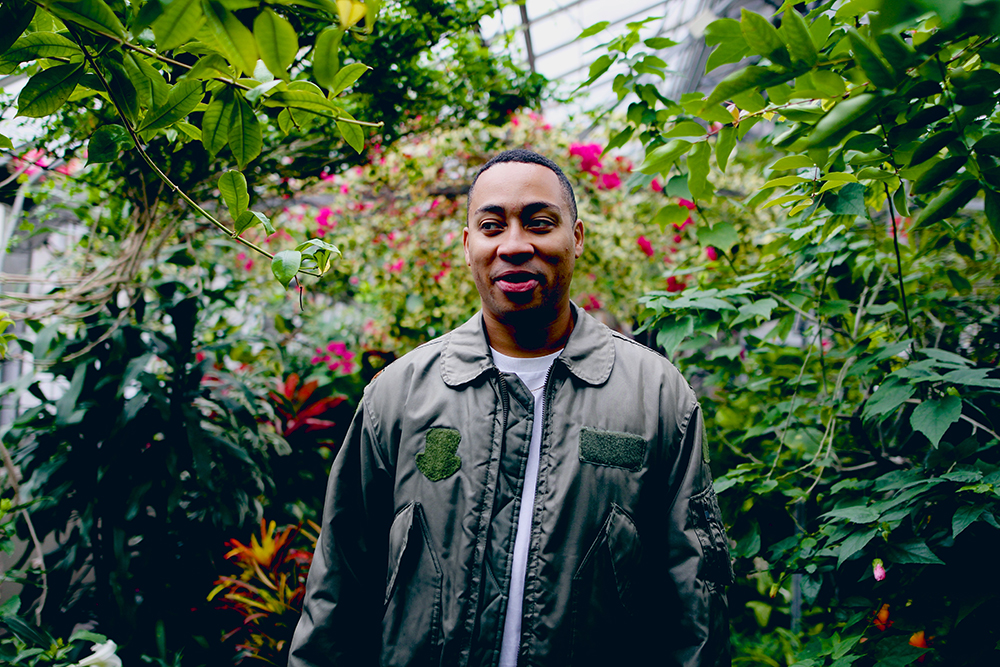 Sidewalk Hustle: Your baby’s finally out! You’re no newbie to the music scene and now with this new album people are finally finding out a bit more about you, as they should. How does it to be getting some much-deserved hype after grinding for more than a minute?

Cadence Weapon: It feels good. I’ve always gotten recognition critically for my albums but I feel like this one is the one where people are kind of getting a better understanding of where I’m coming from. I feel like the music is a lot more personal, so, I feel like it’s all coming together at the right time. You know?

I feel like, every city did a different thing for me. Growing up in Edmonton and being around all these DIY, hardcore and experimental electronic scenes. Being in this isolated environment where you can just make music and there weren’t as many rules. That helped me a lot. And then moving to Montreal and coming to a place where it was like everyone’s an artist, that’s where I really learned how to be an artist. And then coming to Toronto… Now I understand how to work with the business side of things. The combining those three aspects, that’s what the album really is a reflection of.

What do you think is the most underrated track on the album? What has that special place in your heart and, we know it’s like choosing your children…

No, no. I have an answer right away, it’s “Infinity Pool”. That to me is the freshest track on the album. It’s produced by Casey MQ. and there’s nothing that sounds like it. That’s when I get really excited when I’ve tapped into something that feels like some uncharted territory.

That reminds us of “High Rise” – produced by Jacques Greene it’s one of our favourite tracks and also a very Toronto song. (Watch his audiovisual essay on condo culture that was filmed in Toronto’s downtown core above)

Yeah, it’s definitely inspired by living here. It was the experience of moving to Toronto, looking for apartments, looking for houses and stuff, and seeing places that have extremely low vacancy… so many different challenges of living in a city that is growing in that way. I wanted it to almost be from the perspective of this evil real estate agent. I don’t know. It made me feel better to write the song.

It’s almost like a companion piece to Owen Pallett’s “This Lamb Sells Condos” (above), which was released back in 2006. It’s interesting to see how Toronto hasn’t changed and how it is still a lot the same. For a self-described “music city” with the eyes of the world on it with a post-Drake lens, there’s a lot of red tape and we’re in a venue crisis.

I know, that’s the funny thing! There’s this want to be a music city or whatever and they’re trying so hard but the city doesn’t really get behind it in the same way as somewhere like Montreal where it’s really woven to the city fabric. The people… they value it and they don’t want to mess with it. It’s a more balanced perspective. But, I don’t know… with Toronto they talk a big talk about it but when it comes to doing things…Toronto’s lucky that it’s such a big city because you know you get all these big musicians who come here, and things do develop, but it’s like, imagine how much better it would even be if places like that were allowed to thrive and grow and build scenes! So many things come from just creating a place to gather.

Can you tell us more about the cool album art for this new record?

The album art is by a guy named Adam Waito and he lives here but I knew him back in Montreal as well. He’s kind of known for doing all the show posters for pretty much every Blue Skies Turn Black show, and he has a very specific style of art. I was like, aw man it would be amazing to have a kind of show environment. So on the cover it would be, look at the back cover, it’s the outside of the venue, and it’s like all the different little stories and things that happen. My real inspiration for that was that I wanted to be like a Funkadelic cover. I really wanted to make something that not only stands the test of time, but also, stands up to heavy analysis. So I want to have something that’s like, yeah, you could look at this album cover, get stoned, and really enjoy it. But then if you actually think about it and look, there’s a narrative. There’s a lot of messages going on, but there’s also references to every song. If you look at the cover, there’s a reference to every track.

Do you have a favourite Easter egg?

Yeah, there’s one, where there’s a guy with like a flattop he’s like, “put it on vibrate.” And that’s a reference to a De La Soul album. And, and he’s yelling at Adam, the artist and his baby. So, that’s like one of my favourite ones.

We always end by asking for words of advice, just to anyone or anything in general.

Be nice. It’s gotten me far in my life, being nice. I feel like, especially in rap, there’s this whole like, assumption that you have to put on this adversarial front. But if you’re nice, just be nice. Be yourself. That’s the number one thing that I tell people, just be yourself. It’s taken me to great places, just being myself.

Cadence Weapon’s fantastic new self-titled record is out now via eOne Music – Get it here.
You can (and should) catch Cadence live at the tour dates listed below.

This interview has been edited for clarity.